The president hopes to use the infrastructure law to build back his popularity, which has taken a hit amid rising inflation and the inability to fully shake the public health and economic risks from COVID-19.

Washington DC, Nov 15, 2021 — President Joe Biden signed his hard-fought $1 trillion infrastructure deal into law Monday before a bipartisan, celebratory crowd on the White House lawn, declaring that the new infusion of cash for roads, bridges, ports and more is going to make life “change for the better” for the American people.

But prospects are tougher for further bipartisanship ahead of the 2022 midterm elections as Biden pivots back to more difficult negotiations over his broader $1.85 trillion social spending package.

The president hopes to use the infrastructure law to build back his popularity, which has taken a hit amid rising inflation and the inability to fully shake the public health and economic risks from COVID-19.

“My message to the American people is this: America is moving again and your life is going to change for the better,” he said.

With the bipartisan deal, the president had to choose between his promise of fostering national unity and a commitment to transformative change. The final measure whittled down much of his initial vision for infrastructure. Yet the administration hopes to sell the new law as a success that bridged partisan divides and will elevate the country with clean drinking water, high-speed internet and a shift away from fossil fuels.

“Folks, too often in Washington, the reason we didn’t get things done is because we insisted on getting everything we want. Everything,” Biden said. “With this law, we focused on getting things done. I ran for president because the only way to move our country forward in my view was through compromise and consensus.”

Biden will get outside Washington to sell the plan more broadly in coming days.

He intends go to New Hampshire on Tuesday to visit a bridge on the state’s “red list” for repair, and he will go to Detroit on Wednesday for a stop at General Motors’ electric vehicle assembly plant, while other officials also fan out across the country. The president went to the Port of Baltimore last week to highlight how the supply chain investments from the law could limit inflation and strengthen supply chains, a key concern of voters who are dealing with higher prices.

“We see this as is an opportunity because we know that the president’s agenda is quite popular,” White House press secretary Jen Psaki said Monday before the signing. The outreach to voters can move “beyond the legislative process to talk about how this is going to help them. And we’re hoping that’s going to have an impact.”

Biden held off on signing the hard-fought infrastructure deal after it passed on Nov. 5 until legislators would be back from a congressional recess and could join in a splashy bipartisan event. On Sunday night before the signing, the White House announced Mitch Landrieu, the former New Orleans mayor, would help manage and coordinate the implementation of the infrastructure spending.

The gathering Monday on the White House lawn was uniquely upbeat with a brass band and peppy speeches, a contrast to the drama and tensions when the fate of the package was in doubt for several months. The speakers lauded the measure for creating jobs, combating inflation and responding to the needs of voters.

Ohio Sen. Rob Portman, a Republican who helped negotiate the package, celebrated Biden’s willingness to jettison much of his initial proposal to help bring GOP lawmakers on board. Portman even credited former President Donald Trump for raising awareness about infrastructure, even though the loser of the 2020 election voiced intense opposition to the ultimate agreement.

“This bipartisan support for this bill comes because it makes sense for our constituents, but the approach from the center out should be the norm, not the exception,” Portman said.

In order to achieve a bipartisan deal, the president had to cut back his initial ambition to spend $2.3 trillion on infrastructure by more than half. The bill that becomes law on Monday in reality includes about $550 billion in new spending over 10 years, since some of the expenditures in the package were already planned.

McConnell said the country “desperately needs” the new infrastructure money, but he skipped Monday’s signing ceremony, telling WHAS radio in Louisville, Kentucky, that he had “other things” to do.

Historians, economists and engineers interviewed by The Associated Press welcomed Biden’s efforts. But they stressed that $1 trillion was not nearly enough to overcome the government’s failure for decades to maintain and upgrade the country’s infrastructure. The politics essentially forced a trade-off in terms of potential impact not just on the climate but on the ability to outpace the rest of the world this century and remain the dominant economic power.

“We’ve got to be sober here about what our infrastructure gap is in terms of a level of investment and go into this eyes wide open, that this is not going to solve our infrastructure problems across the nation,” said David Van Slyke, dean of the Maxwell School of Citizenship and Public Affairs at Syracuse University.

Biden also tried unsuccessfully to tie the infrastructure package to passage of a broader package of $1.85 trillion in proposed spending on families, health care and a shift to renewable energy that could help address climate change. That measure has yet to gain sufficient support from the narrow Democratic majorities in the Senate and House.

Biden continues to work to appease Democratic skeptics of the broader package such as Sen. Joe Manchin of West Virginia, while also holding on to the most liberal branches of his party. Pelosi said in remarks at the Monday bill signing that the separate package will pass “hopefully this week.”

Texas Sen. Ted Cruz expressed concern during a Fox News interview Sunday that Republican support for the infrastructure law could ultimately lead Democrats to rally and back the second package 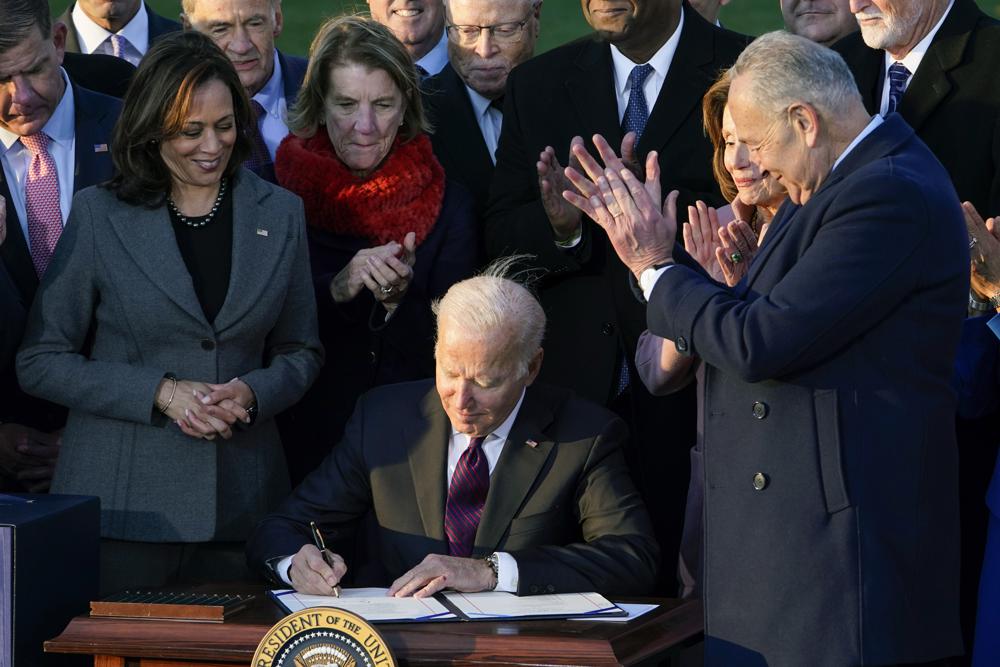 “They gave Joe Biden a political win,” Cruz said of his fellow Republicans. “He will now go across the country touting, look at this big bipartisan win. And that additional momentum, unfortunately, makes it more likely that they whip their Democrats into shape and pass some multi trillion-dollar spending bill on top of this.”

The haggling over infrastructure has shown that Biden can still bring together Democrats and Republicans, even as tensions continue to mount over the Jan. 6 assault on the U.S. Capitol by supporters of Donald Trump who falsely believe that Biden was not legitimately elected president. Yet the result is a product that might not meet the existential threat of climate change or the transformative legacy of Franklin Delano Roosevelt, whose portrait hangs in Biden’s Oval Office.

“Yes, the Infrastructure Investment and Jobs Act is a big deal,” said Peter Norton, a history professor in the University of Virginia’s engineering department. “But the bill is not transformational, because most of it is more of the same.”

Norton compared the limited action on climate change to the start of World War II, when Roosevelt and Congress reoriented the entire U.S. economy after the attack on Pearl Harbor. Within two months, there was a ban on auto production. Dealerships had no new cars to sell for four years as factories focused on weapons and war materiel. To conserve fuel consumption, a national speed limit of 35 mph was introduced.

Biden keeps US target for refugee admissions at 125,000

Fed attacks inflation with another big hike and expects more

‘Art of the steal’: Trump accused of vast fraud in NY suit