Warning: unlink(/tmp/jnewslibrary-veFtjN.tmp): No such file or directory in /home/customer/www/gasiantimes.com/public_html/wp-admin/includes/class-wp-filesystem-ftpext.php on line 142
 China lashes out at press freedom survey in Hong Kong - Georgia Asian Times
ABOUT
Advertise in GAT
Contact us

China lashes out at press freedom survey in Hong Kong

The survey said the members were concerned about a decline in press freedoms under a sweeping national security law imposed by Beijing following massive anti-government protests in 2019.

Hong Kong, Nov 5, 2021 — China on Friday criticized a press freedom survey from the Hong Kong Foreign Correspondents’ Club that found nearly half its members were considering leaving the city.

The survey said the members were concerned about a decline in press freedoms under a sweeping national security law imposed by Beijing following massive anti-government protests in 2019.

Eighty-three of the 99 journalists polled said that the working environment had “changed for the worse” since the law was introduced last June. The law outlaws subversion, secession, terrorism and foreign collusion to intervene in the city’s affairs, and has since been used to arrest over 120 people in the semi-autonomous Chinese city.

“These results clearly show that assurances that Hong Kong still enjoys press freedom, guaranteed under the Basic Law, are not enough,” FCC President Keith Richburg said. “More steps need to be taken to restore confidence among journalists and to make sure Hong Kong maintains its decades-long reputation as a welcoming place for the international media.”

In a statement, the Commissioner’s Office of China’s Foreign Ministry in Hong Kong warned the FCC to stop making “noise” and accused the organization of being “black hands” that intervene in the city’s affairs.

“There is no absolute press freedom in the world that is above the law,” the statement read. “It is a common international practice for countries to supervise the news media working in their own countries in accordance with the law.”

The survey comes as authorities are cracking down on political dissent in Hong Kong. Most of the city’s prominent pro-democracy activists are currently in jail. Critics say the security law has rolled back freedoms promised to Hong Kong for 50 years when it was handed over to China in 1997.

The former British colony was previously known for its vibrant press freedoms, and for decades has served as regional headquarters for many English-language news outlets. 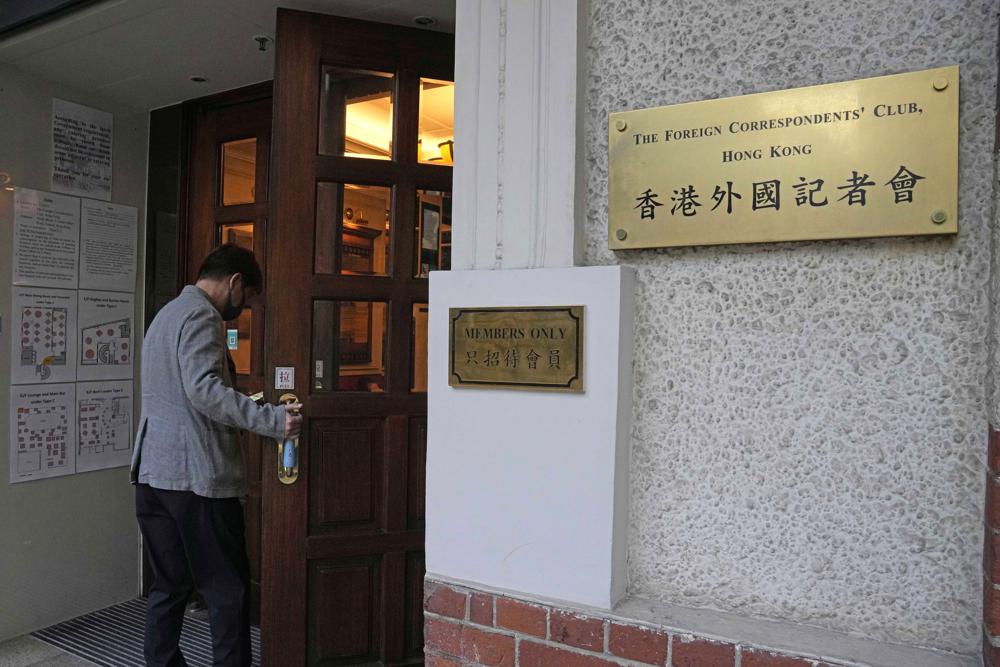 The national security law has been used against journalists in the city. The pro-democracy newspaper Apple Daily was forced to close in June after millions of dollars in assets were frozen and several top editors and executives arrested.

The New York Times has transferred some of its staff from Hong Kong to Seoul due to the uncertainties about the city’s prospects for journalism under the security legislation.

China’s Foreign Ministry spokesperson Wang Wenbin said Friday at a regular news briefing that the rights of foreign media and journalists in Hong Kong will be “fully protected” as long as they report in accordance with the law.

Wang said that as of April this year, there were 628 foreign employees with work visas for foreign media in Hong Kong, a 18.5% increase from the same time last year.

“It is a true reflection of how people from all walks of life, including foreign media in Hong Kong, see and feel about the economic and social and media reporting environment in Hong Kong,” he said. – AP

US hiring rebounded in October, with 531,000 jobs added

US hiring rebounded in October, with 531,000 jobs added


Warning: unlink(/tmp/jnewsfirstload-qAb7eg.tmp): No such file or directory in /home/customer/www/gasiantimes.com/public_html/wp-admin/includes/class-wp-filesystem-ftpext.php on line 142