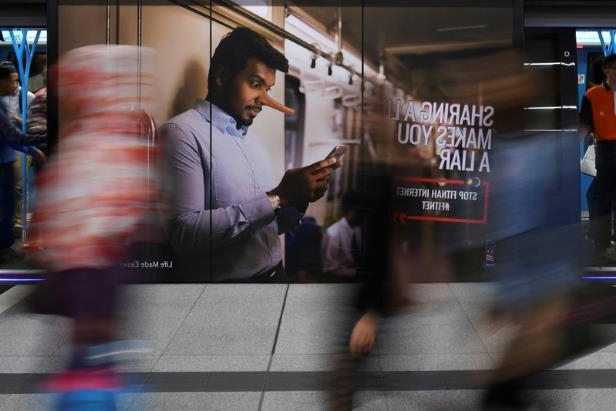 Kuala Lumpur, April 2, 2018 — Malaysia on Monday approved a law against “fake news” that would allow for prison of up to six years for offenders, shrugging off critics who say it was aimed at curbing dissent and free speech ahead of a general election.

Prime Minister Najib Razak’s government secured a simple majority in parliament to pass the Anti-Fake News 2018 bill, which sets out fines of up to 500,000 ringgit ($123,000) and a maximum six years in jail. The first draft of the bill had proposed jail of up to 10 years.

The government said the law would not impinge on freedom of speech and cases under it would be handled through an independent court process.

“This law aims to protect the public from the spread of fake news, while allowing freedom of speech as provided for under the constitution,” Law Minister Azalina Othman Said told parliament.

The law defines fake news as “news, information, data and reports which is or are wholly or partly false” and includes features, visuals and audio recordings.

It covers digital publications and social media and will apply to offenders who maliciously spread “fake news” inside and outside Malaysia, including foreigners, if Malaysia or a Malaysian citizen were affected.

Co-opted by U.S. President Donald Trump, the term “fake news” has quickly become part of the standard repertoire of leaders in authoritarian countries to describe media reports and organizations critical of them.

The U.N. Special Rapporteur on freedom of opinion and expression, David Kaye, had earlier on Monday urged the government not to rush the legislation through parliament.

“I urge the government to reconsider the bill and open it up to regular and genuine public scrutiny before taking any further steps,” David Kaye said in a Twitter post.

Other countries in Southeast Asia, including Singapore and the Philippines, are considering how to tackle “fake news” but human rights activists fear that laws against it could be used to stifle free speech.

Malaysia is among the first few countries to introduce a law against it. Germany approved a plan last year to fine social media networks if they fail to remove hateful postings.

Malaysia already has an arsenal of laws, including a colonial-era Sedition Act, that have been used to clamp down on unfavorable news and social media posts.

News reports and social media posts on a multi-billion dollar scandal at state fund 1Malaysia Development Berhad (1MDB) have hounded Prime Minister Najib, who faces arguably his toughest contest in a general election this year that could be called in days.

Najib has denied any wrongdoing in connection with losses at the fund.

A deputy minister was quoted in media last month as saying any news on 1MDB not verified by the government was “fake”.

Lim Kit Siang, a senior opposition lawmaker with the Democratic Action Party, described the bill as a “Save Najib from 1MDB Scandal Bill” which would criminalize news on the affair. – Reuters

Biden discusses Taiwan with Xi in effort to avoid ‘conflict’