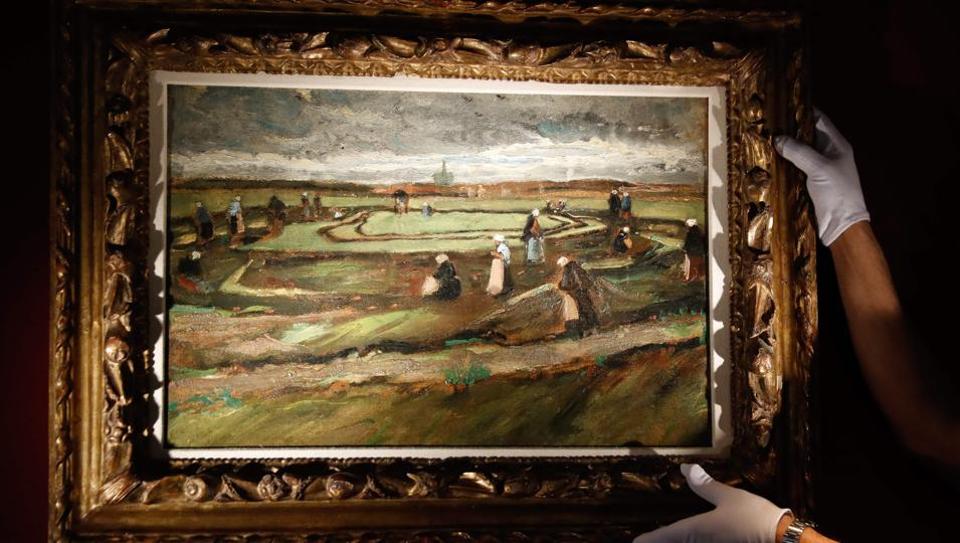 Paris, April 2, 2018 – A landscape painting by Dutch impressionist Vincent Van Gogh that went on display in Paris on Wednesday is expected to fetch between 3-5 million euros ($3.7-$6.1 million) when it is auctioned in June.

The auction of the oil painting, entitled “Fishing Net Menders in the Dunes”, will be the first time Van Gogh’s work has been sold in France in more than two decades.

Painted in 1882, early in the artist’s career, it was inspired by the countryside around The Hague, where Van Gogh passed a short but formative period in terms of his artistic style.

Auctioneer Bruno Jaubert told Reuters the painting’s significance was underlined by the fact that it has spent the past 25 years hanging in some of the world’s most prestigious art museums.

“Why? Because it is a painting which marks an important period in the development of Vincent Van Gogh. It’s the start of his career. And it’s when he discovers all the possibilities of painting, and notably how to create paintings in oil,” he said.

As the only landscape painted by the Dutch artist during this period in his career, it contains many elements that would later become emblematic of Van Gogh’s work, including heavy skies and crows, motifs which would resurface in his masterpiece “Wheatfield with Crows” in 1890.

In a letter to his brother Theo, Van Gogh recounted how struck he was by the spectacle of female peasants, who feature prominently in the painting, moving round the fields, their heads covered in white cloths.

The auction will take place in Paris from June 4. – Reuters

Trump says DACA deal for young immigrants is off