Warning: unlink(/tmp/jnewslibrary-G4a5MB.tmp): No such file or directory in /home/customer/www/gasiantimes.com/public_html/wp-admin/includes/class-wp-filesystem-ftpext.php on line 142
 Best of CES 2023: Wireless TV, delivery robots and in-car VR - Georgia Asian Times
ABOUT
Advertise in GAT
Contact us

The show is getting back to normal after going completely virtual in 2021 and seeing a significant drop in 2022 attendance because of the pandemic.

Las Vegas, January 5, 2023 — Tech companies of all sizes are showing off their latest products at CES, formerly known as the Consumer Electronics show.

The show is getting back to normal after going completely virtual in 2021 and seeing a significant drop in 2022 attendance because of the pandemic.

On Wednesday, big names like LG and Samsung and smaller startups showcased their latest products for the media in Las Vegas. The show officially opens Thursday.

Here are some highlights:

LG Electronics unveiled a 97-inch OLED TV with what it calls a Zero Connect Box that streams content wirelessly. The box, which still needs to be plugged in, just needs to be within 30 feet (nine meters) of the display.

But why would anyone want a wireless 4K television?

David M. Park, senior marketing manager at the South Korean tech company, says it means owners can place a TV in the center of the room without all the messy wires, or maybe mount it above a fireplace or perhaps on a hard-to-drill concrete wall.

LG says the 97-inch LG Signature OLED M (model M3) will be available in the second half of 2023. Pricing has not yet been announced.

Picture yourself weaving through crowds at the airport on a busy holiday weekend, ignoring the rumble in your stomach as you speed past restaurants to make it to your gate on time.

Brooklyn-based Ottonomy.io is looking to ease that all-too-familiar travel anxiety with its fully autonomous delivery robots.

If you’re traveling through airports in Cincinnati, Pittsburgh or Rome, for example, you might cross paths with one of these robots as they bring food directly to travelers at their gates.

Ottonomy unveiled its newest robot, the Yeti, on Wednesday at CES. It showed off its new self-dispensing feature, which eliminates the need for a human to be present to collect deliveries.

Ottonomy co-founder and CEO Ritukar Vijay said the price tag on its services varies depending on the number of robots a company wants to deploy and how many restaurants or retailers are included in the delivery footprint. 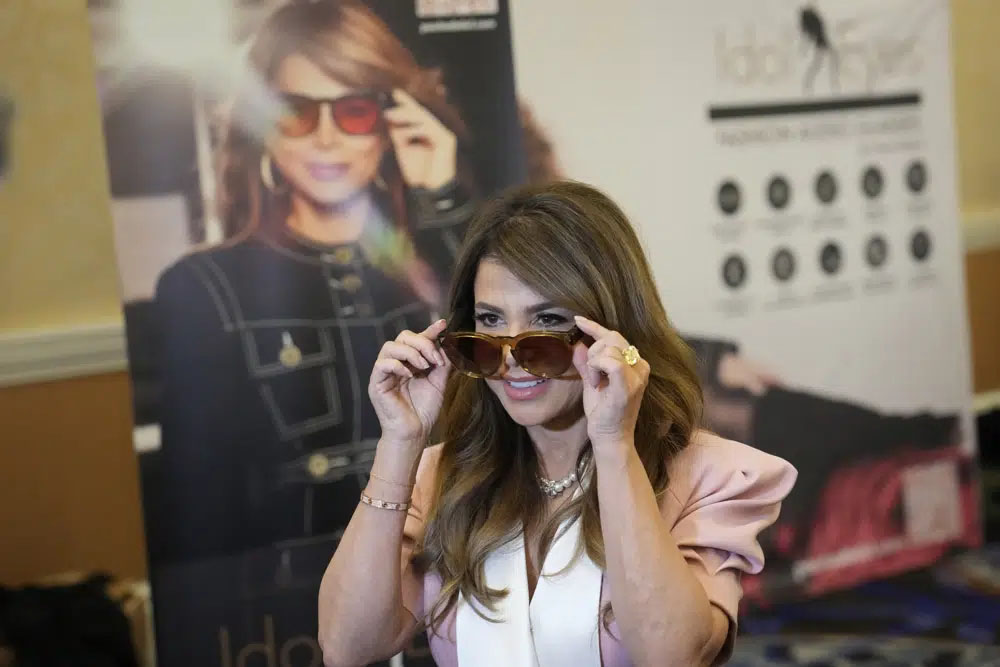 “I’ve wanted to get into the tech world for the longest time,” Abdul told The Associated Press, “but I wanted to do it in a way that was authentic to who I am.”

Starting at $199, the sunglasses feature a five-hour battery life and play audio from the arms of the frames via Bluetooth connectivity. You can listen to music or answer calls.

The Grammy- and Emmy-award winning artist’s first collection of eyewear is available in seven colors, with polarized and blue light filter lenses.

VR FOR YOUR CAR

If the car is moving, you move in the virtual world, helping to prevent car sickness, according to co-founder Daniel Profendiner. Rather than seeing the road, you might be flying and fighting robots or swimming under the sea.

“The car industry is super-focused on the driver but with more autonomous driving on the horizon, the passenger gets more into the focus as well,” he said.

Previously, holoride was only available for Audis with an in-system retrofit so the headset could recognize when the car was moving. On Wednesday at CES, the company announced a new product that can be used in any car.

The retrofit pack, which includes the VR headset, holoride retrofit, a safety strap and a one-year subscription to holoride, is $799.

ROKU GETS ITS OWN TVS

Roku is expanding its line-up of video streaming devices to include internet-connected TVs bearing its brand for the first time.

It’s Roku’s latest attempt to cement its position as a video streaming hub during the ongoing shift from TV provided through internet connections instead of cable and satellite systems.

When the sets roll out later this spring, it will mark the first time that Roku has made its own TVs. The San Jose, California, company will continue to team up with a variety of other manufacturers to include its steaming software in internet-connected TVs — an approach that Roku began in 2014.

The decision to make its own TVs while continuing to make its software available to competing manufacturers is similar to what Google has been doing with its Pixel smartphones since 2016. Google has continued to provide its Android operating system to Samsung and other smartphone manufacturers while using its Pixel line-up as a way to demonstrate how the software works best and to elevate awareness of its brand in the mobile market.

Roku’s 11 television models, with display screens ranging from 24 inches to 75 inches, are expected to sell for about $120 to $1,000 once they arrive in stores.

Roku got an early edge in the now-booming industry nearly 15 years ago when it released its first streaming box after working on the device as a secret project within Netflix, which was in the early stages of building what is now the world’s largest video streaming service.

As tech giants such as Amazon and Apple released their own streaming devices, Roku began to expand into internet-connected TVs made by other companies, sound bars and last year even got into original programming with a movie about satirical song maker Weird Al Yankovic. – AP

Sony unveils prototype EV, Afeela, to be made with Honda

US House has no members, no rules as speaker race drags on

US House has no members, no rules as speaker race drags on


Warning: unlink(/tmp/jnewsfirstload-vfSGAO.tmp): No such file or directory in /home/customer/www/gasiantimes.com/public_html/wp-admin/includes/class-wp-filesystem-ftpext.php on line 142