Gubernatorial Democratic candidate Stacy Abrams delivers her campaign promise to elevate the attention on Georgia's education, healthcare, housing, and quality of life issues at an afternoon rally at Festival Park in downtown Duluth.

Abrams plans to raise funding for teachers salary to an average of $50,000 annually to help recruit and retain quality teachers in Georgia. “I want teachers to be able to focus on teaching and not have to worry about getting a second job to pay bills,” said Abrams aloud.

“We want to fully fund the education in Georgia from cradle to college. We want to fund affordable child care and to pay our teacher with a minimum salary of $50,000 a year.”

Abrams also touched upon the uninsured population and the healthcare access in Georgia. “Georgia currently ranked second in the nation in terms of uninsured,” said Abrams.

“Under the current Governor's plan, if you're making over $9.00 an hour, you don't have access to medical insurance,” explains Abrams.

Abrams also took a stab at Governor Kemp for failing to keep Atlanta Medical Center from closing its door. 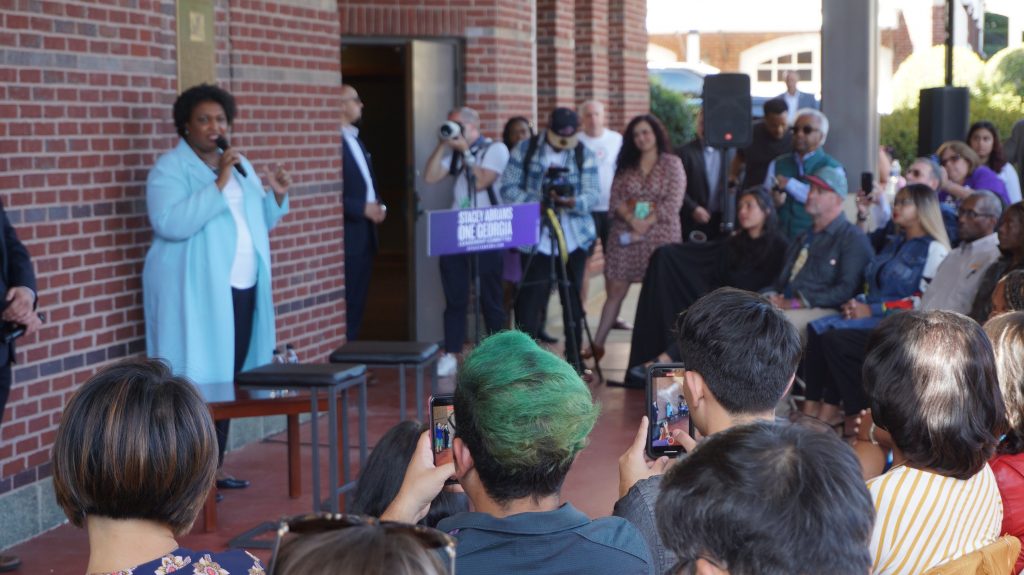 “The Atlanta Medical Center survived 120 years to date but it cannot survive 4-years under the leadership of Brian Kemp. With only one trauma center serving the population in metro Atlanta, we cannot afford that kind of risk for communities of color,” said Abrams.

She also spends time championing the challenges facing small businesses in Georgia. “Under the current Governor, it will take a 100 years to close the economic gap between the majority and the minority in terms of business ownership and revenue generation.”

“We want the ability to make a living and take care of our family. 99% of businesses in Georgia are small business. The current Governor is putting all the economic development resources to big business. 43% of jobs are created by small business in this state,” adds Abrams.

“Under the SBA process, small business applications to the bank does not guarantee you a check in the end. Funding are critical to the survival and growth of small business,” said Abrams.

Abrams also argued that there are inadequate access to Georgia's government contracts by small businesses and minority businesses. “Under the current Governor, small business especially minority owned or colored business are not getting a fair share or access to State of Georgia contracts.”

Abrams plan to promote more equitable small businesses and minority contractors to access State Government contracts if she is elected.

Wishing you and family a Happy & Blessed Thanksgiving