The economy’s vulnerability to disruptions in the flow of computer chips was revealed during the pandemic, when a shortage helped increase costs and stall the assembly of cars and other products.

Tokyo, September 28, 2022 — Armed with a new law that boosts U.S. support for computer chip manufacturing, Vice President Kamala Harris said the administration was looking for new investments and partnerships as she sat down with Japanese technology executives on Wednesday.

The morning meeting on her last full day in Tokyo reflects the administration’s focus on boosting semiconductor manufacturing and expanding the supply chain for critical materials.

The economy’s vulnerability to disruptions in the flow of computer chips was revealed during the pandemic, when a shortage helped increase costs and stall the assembly of cars and other products.

“The citizens and the people of our countries rely on products without even knowing sometimes how reliant those products are on semiconductor chips,” Harris said during the meeting at the U.S. ambassador’s residence.

With China investing in computer chips of its own, the U.S. is trying to increase its domestic semiconductor manufacturing while also working to solidify its technology relationships with South Korea, Taiwan and Japan.

Legislation signed by President Joe Biden, known as the CHIPS and Science Act, includes $52 billion for grants and incentives for semiconductor companies, plus a 25% tax credit when they invest in U.S. facilities. There’s also about $200 billion over the next decade to support research programs.

Harris described the legislation as “a down payment on future American leadership,” but she emphasized that “we see Japan as playing a very important and critical role.”

Although Japan was once a world leader in computer chip manufacturing, its status has eroded over the last two decades, and the country is increasingly worried about falling behind.

Much like the United States has done, Japan has set up its own fund to support semiconductor production. Out of $4.3 billion, $3.3 billion is being provided in subsidies for a new factory in Kumamoto, in the country’s southwest.

The facility is slated to begin production by the end of 2024, and it’s a partnership between the Taiwan Semiconductor Manufacturing Co., Sony Group and Denso.

The companies participating in the meeting with Harris include Tokyo Electron, Nikon, Hitachi High Tech Group, Fujitsu Limited, Micron and others.

When Biden was in Japan earlier this year, the two nations agreed to work together on computer chips, including through a joint group focused on developing more powerful technologies.

There are worries that if Japan is slow to act, the fruits of the Biden initiative may likely be snatched up by another, and more ready, Asian ally, South Korea. 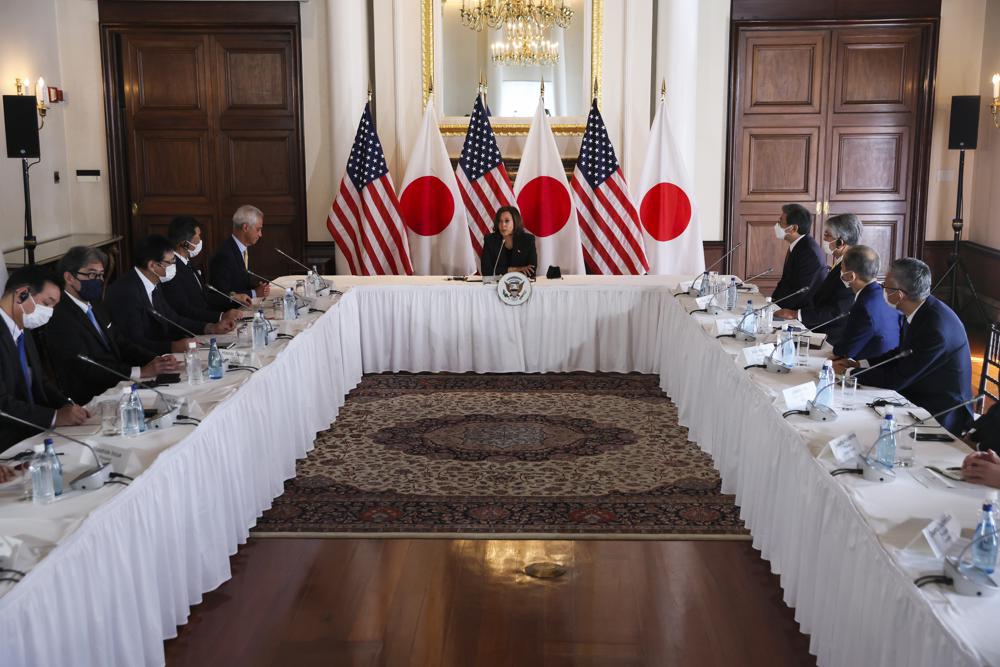 Yasutoshi Nishimura, the Japanese minister for economy, trade and industry, has repeatedly stressed the U.S.-Japan alliance on semiconductors, as well as energy and other issues.

In recent meetings with U.S. Commerce Secretary Gina Raimondo and U.S. Ambassador Rahm Emanuel, Nishimura has promised to set up a facility for semiconductor chips research in Japan this year, and expand the partnership on semiconductors with other allies, including Europe and Taiwan.

Atsushi Sunami, who teaches at The National Graduate Institute for Policy Studies, or GRIPS, in Tokyo, noted that the drawbacks to Japan tackling advanced semiconductor technology may be rooted in the view that Japan should not get involved in defense studies.

That view stems from Japan’s role in World War II and the prevalent pacifist views, both in Japan and in international circles, that came after its defeat. But Sunami stressed a quick rethinking was in order, and the U.S. moves, given the U.S.-Japan alliance, could be an opportunity for Japan.

“As the U.S.-China hegemonic competition escalates, how Japan hopes to position itself in the jockeying for international standards and rule-making, and the strategic formation of alliances among nations, as well as among companies, will be critically meaningful,” he said in a report earlier this year. – AP

Biden keeps US target for refugee admissions at 125,000

US revises up last quarter’s economic growth to 2.9% rate