Warning: unlink(/tmp/jnewslibrary-WgRi8z.tmp): No such file or directory in /home/customer/www/gasiantimes.com/public_html/wp-admin/includes/class-wp-filesystem-ftpext.php on line 142
 Record-setting Sherpa guide contemplates retirement - Georgia Asian Times
ABOUT
Advertise in GAT
Contact us

Sherpa, 47, recently returned to Nepal after completing his second round of all 14 peaks over the height of 8,000 meters (26,240 feet). He has scaled Mount Everest seven times.

Kathmandu, September 2, 2022 — A farmer-turned-mountain guide who recently became the first person to climb all of the world’s 14 highest peaks two times is deciding whether he should retire.

“I think I want to quit climbing high mountains and travel to foreign countries as a tourist for a while,” Sanu Sherpa said Friday in Nepal’s capital, Kathmandu.

Sherpa, 47, recently returned to Nepal after completing his second round of all 14 peaks over the height of 8,000 meters (26,240 feet). He has scaled Mount Everest seven times.

He began mountain climbing later than most people in his community. His first successful climb was in 2006, when he scaled Mount Cho Oyu at age 31. It was only a year after he began working in mountaineering, carrying supplies and climbing gear on his back to the mountains and helping out in the base camp kitchen.

Until then, he had worked in his remote mountain village growing potatoes, corn and wheat and helping his parents graze yaks.

He said he watched as some men from his village worked a few months in mountaineering and came back with good clothes and money, while he struggled on the farm and didn’t make enough to support his family.

He decided to leave his plow and farm tools behind and head to the nearest mountain to work as a porter. 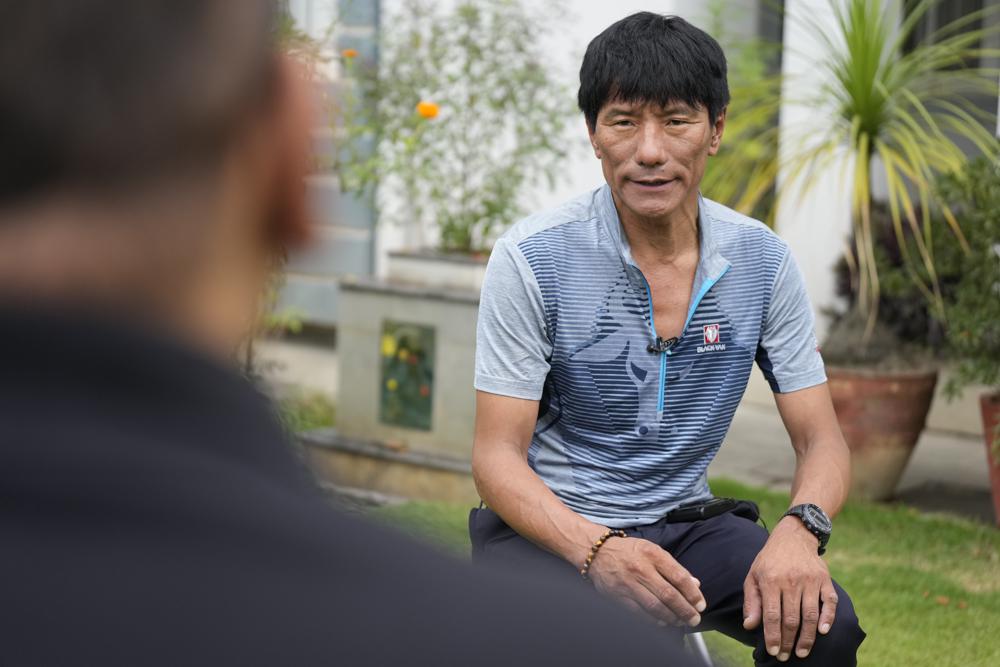 He was the first of his nine siblings to take up mountaineering as a career, but was soon joined by his two other brothers. His only son, who is now in college, has gone to the lower reaches of mountains with his father but does not want to follow his footsteps.

Sherpa has climbed peaks over 8,000 meters a total of 37 times and has been involved in high-altitude rescues as well as the recovery of dead climbers.

“When rescuing, I get the thought that someday I could also be in the same situation, and I get scared. But I continued to climb because it is only as a Sherpa guide that I can get employment,” he told The Associated Press. “We do not have other skills or education to get any other work.”

He has become one of the most sought-after mountain guides since setting the new mountaineering record, but said he is thinking about quitting because his family does not want him to continue taking the risk.

“I am receiving lots of offers now from foreign clients who say they will give me very good money to guide them to the mountain peaks, but I have not replied,” he said. – AP

US hiring slows as employers add a still-solid 315,000 jobs

US hiring slows as employers add a still-solid 315,000 jobs


Warning: unlink(/tmp/jnewsfirstload-zqKYJD.tmp): No such file or directory in /home/customer/www/gasiantimes.com/public_html/wp-admin/includes/class-wp-filesystem-ftpext.php on line 142