CPACS staff inform public about their corrupt Board of Directors

CPACS staff revolt against corrupt Board of Directors

Doraville, July 26, 2022 – Over thirty Center for Pan Asian Communities Services (CPACs) staff gathered Tuesday morning in the main office to speak out against corruption by the CPACS Board of Directors.

CPACS received major Federal grants and fundings from major philanthropy funders worth millions annually for its program services to the community.

According to a media advisory sent the prior evening, the Board has failed the Asian American, refugee, and immigrant communities by exemplifying “the systemic oppression” that CPACS works to dismantle. It also noted year-long practices of inaction, suppression, and deceit and an “improper conduct” within CPACS and CCHC (Cosmo Community Health Center).

The timeline can be dated back to May 27, 2021, when the Board of Directors unanimously approved Dr. Jung Ha Kim as CEO of CPACS. Her official start in the new position was July 1, 2021 and immediately, CPACS staff felt a difference under her leadership.

“… staff felt an immediate difference under her leadership—hopeful for the future, respected as people, and re-energized to support our communities,” Huynh said.

Today, over a year later, Dr. Kim and dissenting Board members have been removed from their positions by the Board of Directors and staff who asked “too many questions” about finances or offered “too much” of their opinion have been silenced.

Three investigations by three separate law firms were conducted in the span of three months, each providing a glimpse of the “tyrannical” style of leadership built on “dishonesty and toxicity” that staff experienced before Dr. Kim was named CEO. 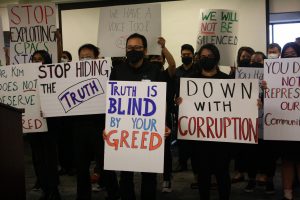 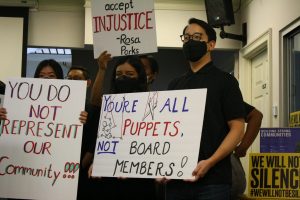 Additionally, the Board labeled reports that reveal wrongdoings as “only allegations” and hired another law firm to discredit initial findings. Board meeting minutes were edited without the Board’s approval to fabricate motions that were never voted on and support narratives for the alleged co-CEO structure, said the statement.

Despite the Board’s effort to ignore and suppress the requests to discuss unethical behaviors, they were provided an opportunity to hear directly from CPACS staff about their concerns on July 19, 2022.

Due to ongoing investigations, more details could not be disclosed on Tuesday. However, Dr. Kim said: “This day marks the new beginning and new phase at CPACS.” 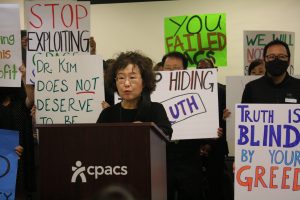 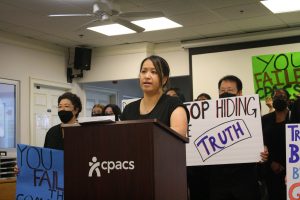 With over 350 online signatures to the open letter and signs reading “You’re all puppets, not board members” and “You failed the community,” it becomes obvious that the CPACS Board of Directors’ corrupt actions will no longer be tolerated.

“We will not remain silent. We will break the cycle.”

The link to read the issue statement and sign the open letter is: https://bit.ly/cpacsopenletter