Hyundai Motor Group CEO Jaehoon Chang made the announcement with Gov. Brian Kemp at the site of the future factory in Bryan County, where state and local officials purchased a flat, sprawling tract for $61 million last year in hopes of luring a major manufacturer.

Ellabell, May 21, 2022 — Hyundai Motor Group confirmed Friday the company will spend $5.5 billion on a huge electric vehicle plant near Savannah that will employ thousands — a deal Georgia’s governor called the largest economic development project in the state’s history.

Hyundai Motor Group CEO Jaehoon Chang made the announcement with Gov. Brian Kemp at the site of the future factory in Bryan County, where state and local officials purchased a flat, sprawling tract for $61 million last year in hopes of luring a major manufacturer.

“Hard-working Georgians are going to have the opportunity to have a really high-paying, advanced manufacturing job with a great company,” Kemp said in an interview.

Hyundai said it will employ at least 8,100 workers at the plant near the unincorporated town of Ellabell. It will be Hyundai’s first U.S. plant dedicated to assembling electric vehicles and will also produce vehicle batteries.

“This new, high tech EV plant represents the future of our business,” Chang told more than 100 people sipping champagne under a tent pitched at the site on a dusty field of cleared dirt.

Hyundai Motors said it plans to start construction early next year and in 2025 begin producing up to 300,000 vehicles per year. The company didn’t say which vehicle models the Georgia plant will make. In a video shown at the Georgia announcement, Hyundai Motors Chairman Euisun Chung said it will produce “a wide range of exciting, innovative EVs for our American customers.” 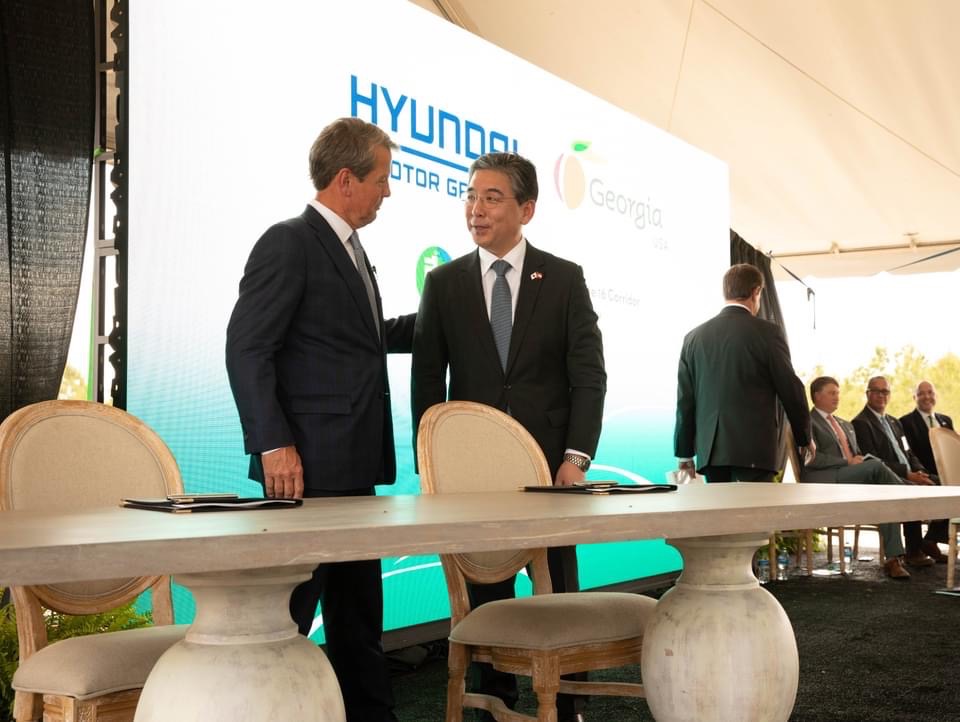 The company and state officials said they expect suppliers to invest an additional $1 billion in the area.

“It’s going to continue to bring wealth and opportunity to the region,” said Kemp, who predicted a ripple effect that will boost businesses from Savannah’s already booming seaport to restaurants and convenience stores.

The announcement came as President Joe Biden is visiting South Korea. He was scheduled to meet with Hyundai’s CEO in Seoul on Sunday. Jake Sullivan, the president’s national security adviser, told reporters Biden “will have the opportunity to say thank you for this significant investment that will occur in the United States.”

The timing was fortunate for Kemp, who is being challenged by former U.S. Sen. David Perdue in a Republican primary election that will be decided Tuesday.

It’s the second huge electric vehicle plant announced in Georgia in less than a year. Rivian Automotive announced in December plans for a $5 billion electric truck plant east of Atlanta that’s expected to employ about 7,500 workers. 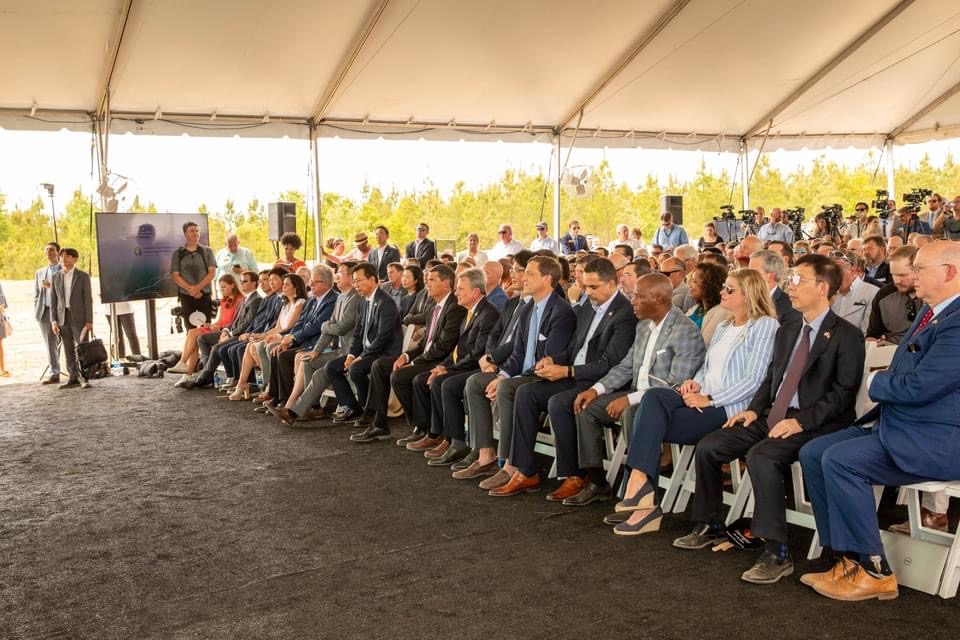 Kemp declined to discuss details of what incentives and tax breaks the company was offered for locating in Georgia. Rivian received and package worth $1.5 billion.

The state of Georgia and partner local governments bought 2,200 acres (890 acres) in Bryan County a year ago to lure a large manufacturer. It wasn’t large enough for Hyundai. The state and its partners purchased two additional neighboring tracts to expand the site to more than 2,900 acres (1,170 hectares).

That’s more than 4.5 square miles (11.6 square kilometers) dedicated to the Hyundai project. Officials declined to give the sale price of the extra acreage, saying the property was under contract but the deal hadn’t been finalized.

The plant site sits adjacent to Interstate 16 that links Savannah and Macon, not far from its intersection with Interstate 95 that spans the Eastern Seaboard. It’s also near to the Port of Savannah, the fourth-busiest U.S. seaport. 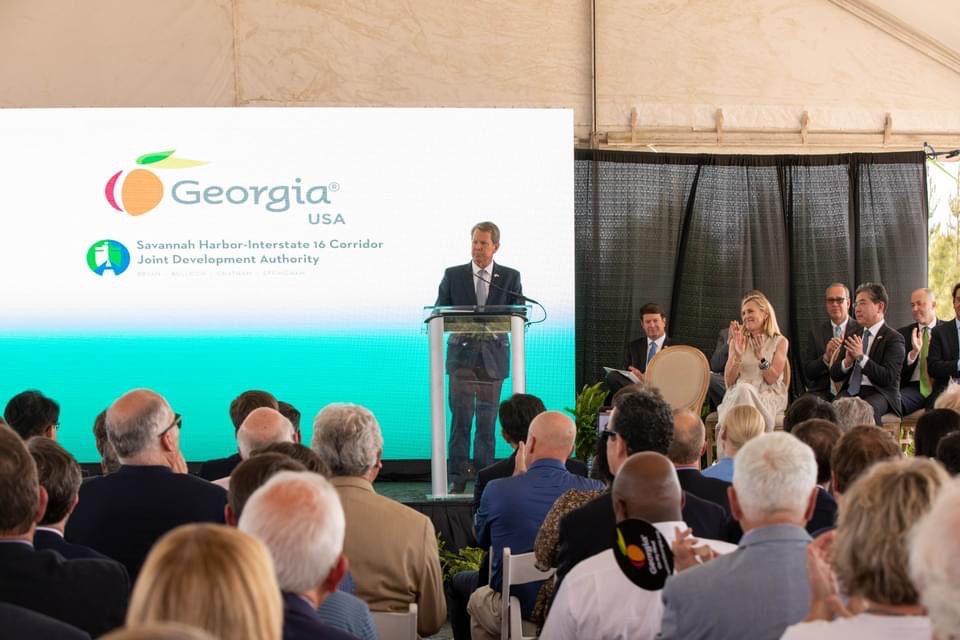 Kemp predicted the Hyundai plant will become one of the biggest customers for Savannah’s port, which has already seen explosive growth in recent years.

Perdue stopped Friday in Savannah to campaign with Sarah Palin, the former Alaska governor and onetime GOP vice presidential candidate. Palin borrowed one of former President Donald Trump’s slogans to praise Perdue as a Republican who “was America First before America First was cool.” 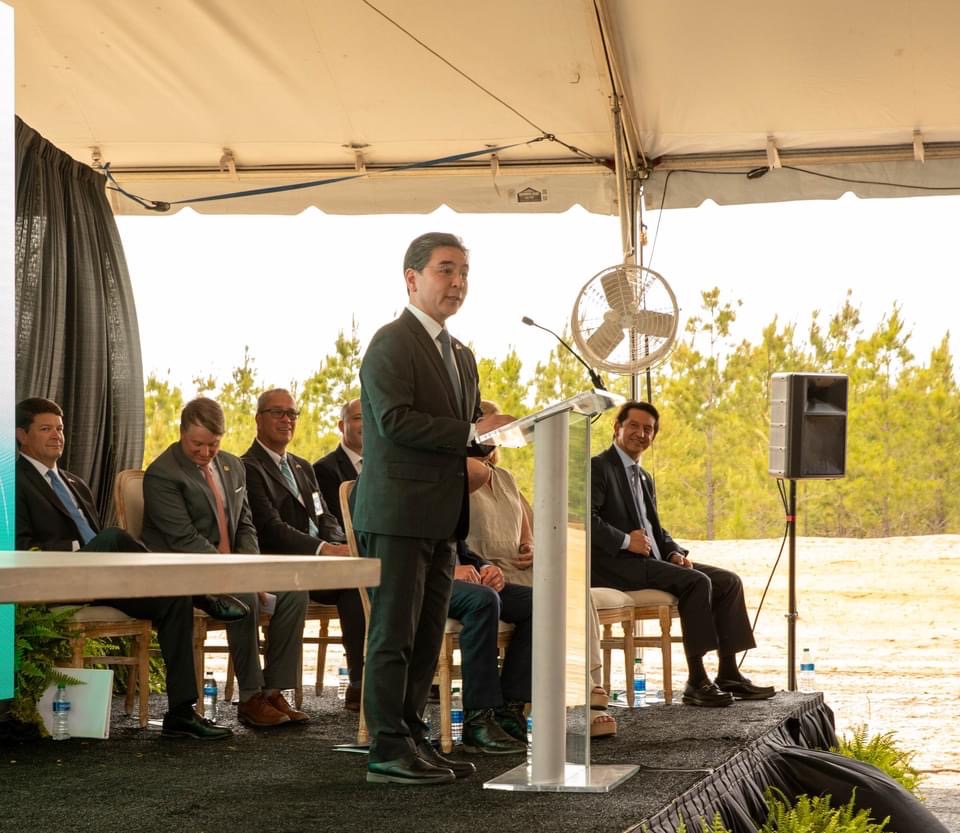 Perdue has accused Kemp to trying to buy his reelection with the Rivian deal and its big incentives. Kemp brushed off the criticism, noting Perdue’s record of outsourcing U.S. jobs to overseas manufactures as a corporate executive.

The governor said incentives help Georgia compete for big projects with states such as South Carolina, Tennessee and Texas. He pointed to the Kia plant in West Point as one that filled a void when the local textile industry shut down years earlier.

“You’ve seen downtowns that used to be ghost towns, they’re vibrant communities now,” Kemp said. He added: “These are investments that we’ll be reaping the benefits of 20 to 30 years down the road.” – AP

Taiwan not included in launch of new Biden Indo-Pacific pact

US revises up last quarter’s economic growth to 2.9% rate

Taiwan not included in launch of new Biden Indo-Pacific pact