Washington DC, April 26, 2018 – The U.S. Senate confirmed Mike Pompeo as President Donald Trump’s secretary of state on Thursday, and the former CIA director set off immediately on a trip to meet key allies in Europe and the Middle East.

Pompeo, a former Army officer who was a Republican congressman, is regarded as a Trump loyalist with hawkish world views. 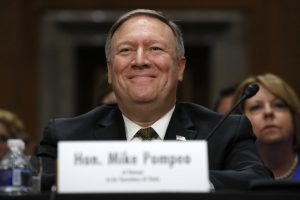 Pompeo is already deeply involved in diplomacy. Trump sent him to North Korea three weeks ago to meet with the country’s leader, Kim Jong Un, ahead of a summit with the U.S. president to address Pyongyang’s nuclear program.

Moments after Pompeo was sworn in, the State Department said he would visit Saudi Arabia, Jordan and Israel during the weekend after attending a NATO meeting on Friday in Brussels.

Pompeo picked those three Middle East stops “because of all that is going on,” State Department spokeswoman Heather Nauert told reporters.

Iran is likely to be on the agenda on the Middle East leg of his trip. Trump will decide by May 12 whether to restore U.S. economic sanctions on Tehran, which would be a severe blow to the 2015 nuclear pact between Iran and six major powers.

Senators in the Republican-controlled chamber voted 57-42 in favor of Pompeo, who had faced resistance from Democrats worried about his reputation for hawkishness and past harsh statements about homosexuality and Islam.

Six Democrats and one independent who normally votes with Democrats backed Pompeo. No Republican voted no.

Pompeo will be forced to quickly address a wide array of other international challenges, including long conflicts in Syria, Iraq and Afghanistan, Chinese expansionism in Asia and Russian assertiveness.

Washington is working with European allies such as French President Emmanuel Macron and German Chancellor Angela Merkel on the possibility of toughening the nuclear agreement with Iran.

Pompeo’s supporters said he did well during 15 months leading the CIA, and said the country badly needed a leader at the State Department. Staffing at State was slashed and many positions left unfilled under his predecessor, Rex Tillerson, a former oil executive who was Trump’s first secretary of state.

Trump, who abruptly fired Tillerson last month, welcomed Pompeo’s confirmation, saying in a statement, “Having a patriot of Mike’s immense talent, energy, and intellect leading the Department of State will be an incredible asset for our country at this critical time in history.”

Pompeo, who became one of Trump’s closest advisers while at the CIA, faced stiff opposition from Democrats, who worried he might be too closely aligned with the president.

While in Congress, Pompeo opposed the Iran nuclear accord. He once suggested the answer to Tehran’s nuclear program – which Iran has always said was for peaceful means only – was 2,000 bombing sorties.

Senator Ben Cardin, a senior Democrat on the Senate Foreign Relations Committee, said that attitude, and Pompeo’s backing for Washington’s withdrawal from the nuclear agreement if it cannot be changed, were among reasons he opposed him.

“That’s not diplomacy, and that’s certainly not working with our European allies,” Cardin said.

Pompeo said during his confirmation hearing he was open to fixing, rather than blowing apart, the pact, which the West believes is essential to preventing Iran from getting a nuclear bomb.

Trump picked the CIA’s deputy director, Gina Haspel, to replace Pompeo as head of the spy agency. If confirmed by the Senate, she would become the first woman to hold the post.

Pompeo had avoided being the first nominee for secretary of state ever rejected by the Foreign Relations Committee only when Republican Senator Rand Paul, who had vowed to oppose him, shifted position minutes before the panel voted on Monday.

None of the 10 Democrats on the 21-member committee supported him.

The vote for Pompeo was almost the same as for Tillerson, who was approved by 56-43, then an unusually close margin for a cabinet position. – Reuters