Beijing/Washington DC, April 4, 2018 – China hit back quickly on Wednesday against the Trump administration’s plans to impose tariffs on $50 billion in Chinese goods, retaliating with a list of similar duties on key U.S. imports including soybeans, planes, cars, beef and chemicals.

The speed with which the trade struggle between Washington and Beijing is ratcheting up – China took less than 11 hours to respond with its own measures – led to a sharp selloff in global stock markets and commodities.

U.S. President Donald Trump, who has long charged that his predecessors served the United States badly in trade matters, rejected the notion that the tit-for-tat moves amounted to a trade war between the world’s two economic superpowers. 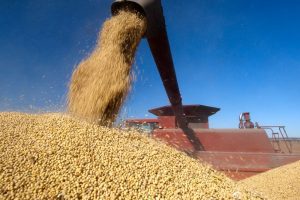 “We are not in a trade war with China, that war was lost many years ago by the foolish, or incompetent, people who represented the U.S.,” Trump wrote in a post on Twitter early on Wednesday.

Because the actions will not be carried out immediately, there may be room for maneuver. Publication of Washington’s list starts a period of public comment and consultation expected to last around two months. The effective date of China’s moves depends on when the U.S. action takes effect.

U.S. Commerce Secretary Wilbur Ross said in an interview with CNBC that it would not be surprising if the U.S. and China trade actions led to negotiations, although he would not speculate on when this might happen.

Investors were wondering, nonetheless, how far one of the worst trade disputes in many years could escalate.

“The assumption was China would not respond too aggressively and avoid escalating tensions. China’s response is a surprise for some people,” said Julian Evans-Pritchard, senior China economist at Capital Economics, noting that neither side had yet called for enforcement of the tariffs.

“It’s more of a game of brinkmanship, making it clear what the cost would be, in the hopes that both sides can come to agreement and none of these tariffs will come into force,” said Evans-Pritchard. – Reuters