Atlanta, January 2, 2018 — The American Korean Friendship Society (AKFS) this year presents its New American Hero Awards to Byung Jin “BJay” Pak and Steve Stirling. AKFS has recognized seven patriots in the last several years with its New American Hero Award and its accompanying $10,000 prize. Along with Chairman Frank Blake, AKFS is pleased again this year to announce two more American patriots of Korean ancestry who have served the United States in a significant manner and made all Americans proud. The purpose of the award program is to stimulate other immigrants to be more assimilative to the United States.

BJay immigrated to the United States with his family and has been exceptional in his community service, both as a volunteer for countless nonprofit organizations and in serving the people as a state representative from the 108th District of Georgia for three terms. BJay became a bright, shining role model for many in the community, particularly young students, when he was appointed as U.S. attorney. 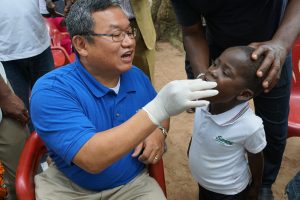 Steve Stirling, a Korean-born American, is the president/CEO of the Medicine Assistant Program (MAP) International, a Christian global health organization that provides medicines, prevents disease, and promotes health in some of the world’s poorest countries. MAP International has provided more than $6 billion in medicines and health supplies to communities in need since its inception in 1954. MAP is recognized for its stewardship by charity watchdogs, each year achieving the highest ratings from the Better Business Bureau, Charity Navigator, CNBC, ECFA, and Forbes magazine.

Steve assumed the position in mid-2014 after holding leadership positions in major corporations and nonprofit organizations including, most recently, executive vice president of ChildFund International, a leading international child-focused development NGO. Stirling held senior-level positions with Heifer International (EVP of marketing and resource development), Univera Life Sciences (VP of marketing and communications), ChildHelp (SVP of marketing and resource development), and for five years, Stirling served as the vice president of marketing operations and executive director–major donor fundraising for World Vision U.S. Steve is a role model to immigrants as a passionate volunteer and as a corporate leader, admired by many Americans.

The American Korean Friendship Society, Inc. (AKFS) is a nonprofit (81-1408283 IRS Code 501(c) (3) and nonpolitical civic organization founded in 1996 in Atlanta, Georgia. The Society serves to celebrate and strengthen the unique relationship between the peoples of the Republic of Korea and the United States of America. The Society created the New American Hero Award to recognize Korean American patriots.

Apple to issue fix for iPhones, Macs at risk from Spectre chip flaw

Apple to issue fix for iPhones, Macs at risk from Spectre chip flaw