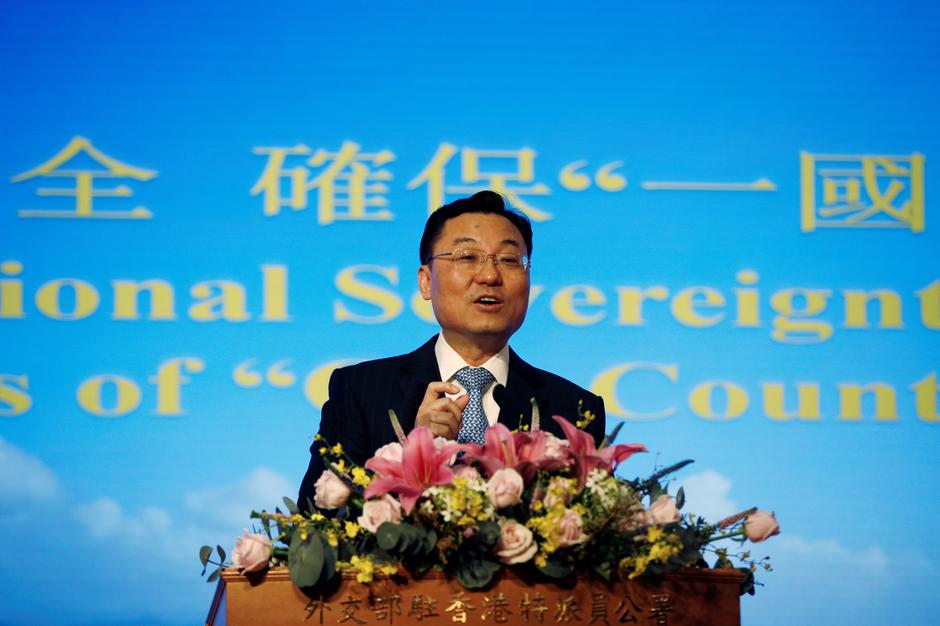 Several government departments issued statements in defense of the proposal after the biggest protest in the city since the coronavirus lockdown on Sunday.

The security legislation, some details of which were announced last week, aims to tackle secession, subversion and terrorist activities and could see Chinese intelligence agencies set up bases in semi-autonomous Hong Kong, one of the world’s leading financial hubs.

Pro-democracy activists and politicians say the legislation could erode Hong Kong’s freedoms, guaranteed under the “one country, two systems” agreement under which former colonial power Britain returned the territory to China in 1997.

At a briefing for diplomats, foreign business chambers and correspondents, China’s Foreign Commissioner in Hong Kong, Xie Feng, said the laws would only target a minority of “troublemakers” who had posed “imminent danger” to China’s national security.

“The legislation will alleviate the grave concerns among local and foreign business communities about the violent and terrorist forces,” Xie said.

He declined to clarify specifics of the proposed laws that have stoked concerns, including when the full legislation would be enacted, what specific acts would be outlawed, and whether it would have retroactive effect.

Asked whether the security agencies to be set up in Hong Kong would have law enforcement powers, Xie said: “Concerning the details, they are still being deliberated so I’m not in a position to tell you right now.”

Hong Kong and mainland Chinese officials have come out in recent days seeking to reassure investors their interests would not be harmed and criticizing protesters.

Secretary for Security John Lee said “terrorism is growing” and harmful activities such as calling for Hong Kong’s independence were becoming more rampant.

In scenes evoking memories of last year’s protests, crowds thronged city streets on Sunday, many chanting “Hong Kong independence, the only way out.”

Police said they arrested more than 180 people, firing tear gas and water cannon for the first time in months.

Calls for independence are anathema to Beijing, which considers Hong Kong an inalienable part of the country. The proposed framework stresses Beijing’s intent to crack down on such acts.

Protests are expected to flare again on Wednesday, with the city’s legislature set to debate a bill to criminalize abuse of China’s national anthem.

Financial Secretary Paul Chan wrote on his blog that the national security law itself does not affect investor confidence, only the “misunderstanding” of it does.

The United States, Australia, Britain, Canada and others have expressed concerns about the legislation, widely seen as a potential turning point for China’s freest city.

Washington is considering whether to maintain Hong Kong’s special status in U.S. law, which has helped it maintain its position as a global financial centre.

Taiwan is also considering revoking the special status it extends to Hong Kong due to China’s planned legislation, a move that could make it harder for Hong Kongers to visit and is likely to anger Beijing.

Business figures said the legislation could lead to money and talent leaving the city.

The Hong Kong Bar Association on Monday questioned the legality of a mechanism Beijing is expected to use to introduce the legislation, which annexes it to the city’s mini-constitution, bypassing public consultation and the legislature.

It also raised doubts about the legality of any new mainland agencies in the city as well as whether the independence of the judicial system will be preserved.

A Hong Kong government spokesperson said most residents and overseas investors “have nothing to fear” from the new security legislation. – Reuters