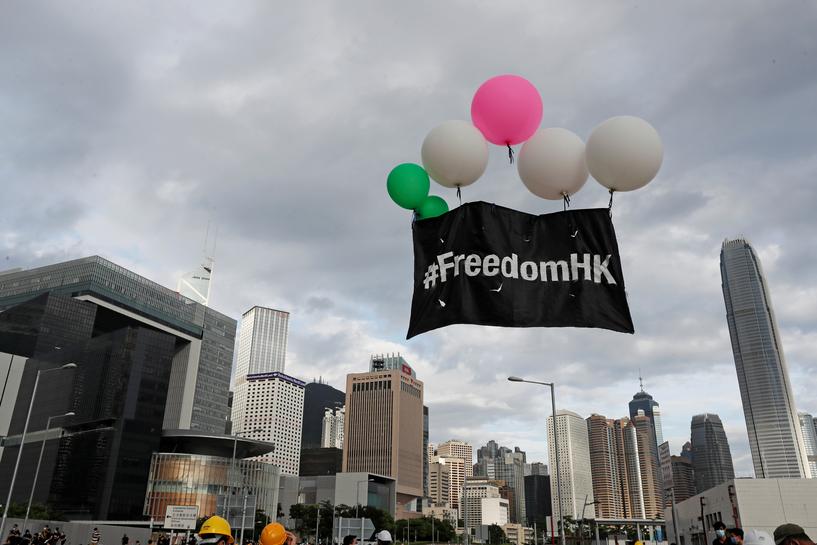 Hong Kong, July 1, 2019 – Hundreds of protesters faced off with riot police early on Monday, the anniversary of Hong Kong’s return to Chinese rule, ahead of an annual rally that is expected to draw huge crowds amid widespread anger over a controversial extradition bill.

Police fired pepper spray to disperse the demonstrators in the latest protests over the extradition bill, which would allow people to be sent to mainland China for trial in courts controlled by the Communist Party.

The bill, which the government was forced to suspend after the largest and most violent protests in decades, has plunged the Asian financial center into political turmoil.

Embattled Hong Kong leader Carrie Lam appeared in public for the first time in more than 10 days to officiate at a flag-raising ceremony to mark the 22nd anniversary of the city’s handover to Beijing under a deal to ensure its autonomy.

The July 1 anniversary of the 1997 handover has been marked in recent years by deepening despondency about what many residents see as increasing meddling by the mainland and the erosion of freedoms.

Beijing denies interfering but, for many Hong Kong residents, the extradition bill is the latest step in a relentless march toward mainland control.

Millions have taken to the streets in recent weeks to demand the bill be scrapped and that Lam step down.

The uproar over the bill has reignited a protest movement that had lost steam after pro-democracy demonstrations in 2014 failed to force concessions from Beijing and led to the arrests of hundreds of activists.

Organizers of the recent protests say they are confident that anger over the government’s failure to withdraw the extradition bill will boost numbers on Monday, a public holiday on which financial markets and most businesses will be closed.

The pro-democracy rally is due to start at 0630 GMT in Victoria Park on Hong Kong island and end at government offices near the heart of the financial center.

The recent demonstrations have brought havoc, forcing the closure of government offices on several occasions and triggering chaos as protesters blocked roads and besieged police headquarters.

The South China Morning Post cited unidentified sources as saying about 5,000 riot police would be ready for any trouble.

The turmoil comes at a delicate time for Beijing, which is grappling with a trade dispute with the United States, a faltering economy and tensions in the South China Sea.

Lam, in her decision to suspend the bill, said she had heard the people “loud and clear”. However, she stopped short of activists’ demands to scrap the bill altogether and rejected calls to step down.

Activists are also demanding the government drop charges against those arrested during the protests, charge police with what they describe as excessive use of force and stop referring to the demonstrations as a riot, a term that can bring a heavier jail sentence.

The embattled city government does have support.

Thousands of people rallied to back the police on Sunday in heavy rain and sweltering heat of around 33 degrees Celsius (91.4 Fahrenheit).

Hong Kong returned to Chinese rule on July 1, 1997, under a “one country, two systems” formula that allows freedoms not enjoyed in mainland China, including freedom of protest and a much-cherished independent judiciary.

Opponents of the extradition bill see it as a threat to the rule of law and fear it would put them at the mercy of China’s justice system, where human rights are not guaranteed.

The turnout at the handover anniversary rally in 2018 was one of the lowest ever, after the opposition lost steam, with organizers saying about 50,000 people turned up. Police put the number at 9,800. – Reuters