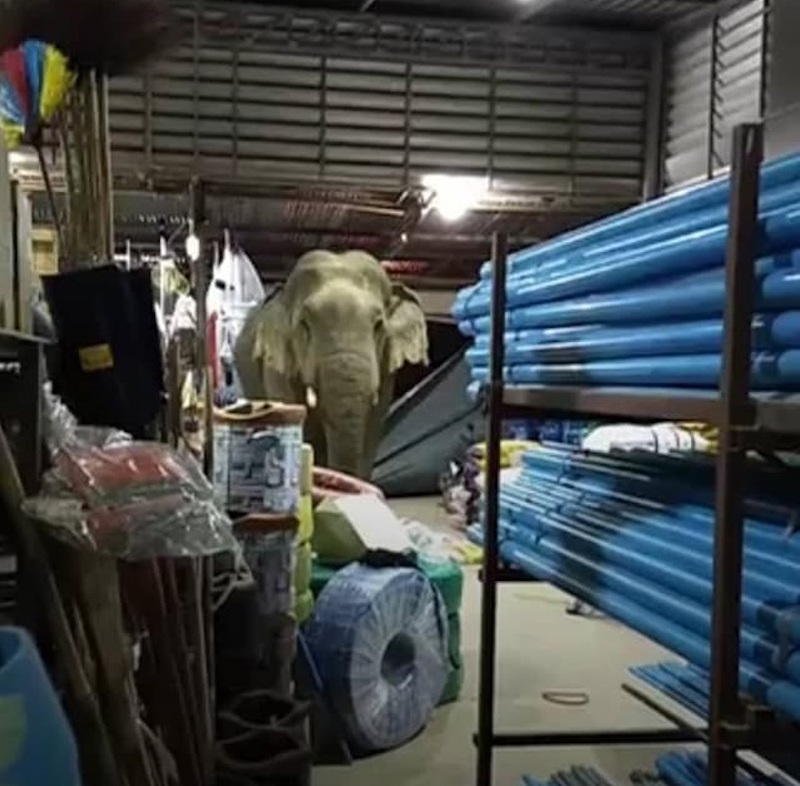 Bangkok, July 9, 2020 — The pungent scent (or enticing odour depending on your preference) of the durian proved to be too hard to resist for a wild elephant who stormed into a store in Phetchaburi, Thailand to get his fix.

The four-legged durian-lover tore down a metal shutter that cost THB12,000 on Tuesday afternoon before returning for a second helping later that night, Coconuts Bangkok reported.

The incident took place at the Kaeng Krachan National Park, Thailand’s largest national park is situated near the popular beach town of Hua Hin and sits on the border with Myanmmar.

Siriphon Kerdsuchon who owns the Dao Kaset Pa La-U agricultural store told reporters the bull elephant, which was most likely in his teens, ate more than 10 durians worth thousands of baht during his second gorging session.

He also destroyed the freshly-repaired door that was installed following the elephant’s initial visit.

Siriphon, who was in the store when the elephant dropped by unannounced for dinner, said she was ready with her camera to capture him in action.

Park ranger Jiranun Sawatkul said an investigation has been launched and they are in the midst of collecting evidence.

But if Siriphon is seeking compensation, she will have to wait for approval from senior officials as their funds are very small.

The 47-year-old shop owner said it was not uncommon for such incidents to occur.

Other farmers in the area, including Prachuap Khiri Khan province’s Huai Sat Yai and Hua Hin districts, were not spared when it came to wild elephant food raids.

Siriphon said everyone simply puts up with the majestic creatures and they have coexisted for more than 15 years.

To curb wildlife from disrupting nearby communities and their produce, the ranger said the park has plans to install more camera traps.