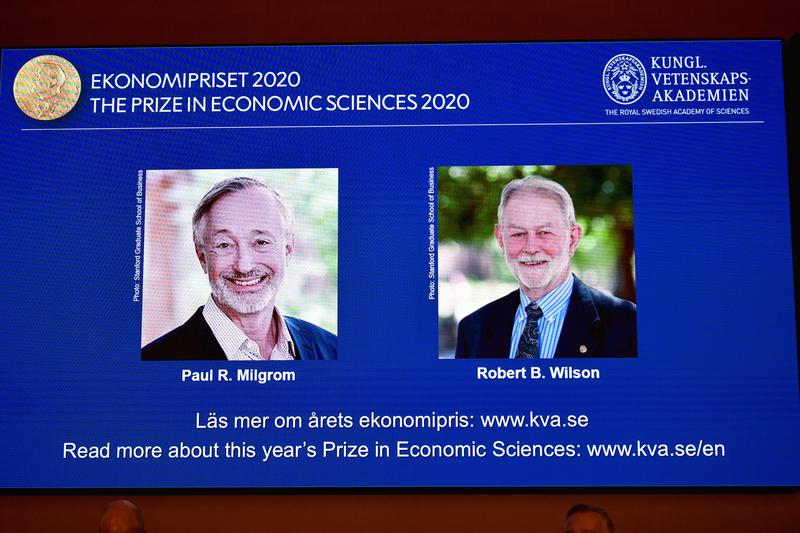 Stockholm, Oct 12, 2020 – U.S. academics Paul Milgrom and Robert Wilson won the 2020 Nobel Economics on Monday for work on auctions hailed as benefiting buyers and sellers around the world of everything from fishing quotas to aircraft landing slots.

Among the insights of the two Stanford University economists is an explanation of how bidders seek to avoid the so-called “winner’s curse” of over-paying, and what happens when bidders gain a better understanding of their rivals’ sense of value.

Milgrom and Wilson notably came up with formats for selling interrelated items simultaneously. In 1994, U.S. authorities used one of their auction designs to sell radio frequencies to telecom operators, a move since copied in other countries.

Wilson showed that rational bidders tend to place bids below their own best estimate of what he called the “common value” – that is, when the value of an item is deemed to be the same for everyone – for fear of paying too much.

Milgrom complemented that with theories on “private values”, when the perceived value of something differs from bidder to bidder.

He demonstrated that an auction format will give the seller

higher expected revenue when bidders learn more about each other’s estimated values during the bidding process.

Speaking to reporters by telephone, Wilson welcomed the “happy news” of the award and revealed that his own personal experience of auction participation was limited.

“I promised myself never to actively participate in an auction,” Wilson said. “My wife points out that we bought ski boots on eBay – I guess that was an auction.”

Milgrom told Reuters that Wilson, who lives across the street from him in Stanford, California, came to knock on his door in the pre-dawn hours to tell him of their shared award because his phone had been on silent mode so he could sleep.

Milgrom played down the winner’s curse, saying the main thing was to be aware of it.

Asked to cite an example of a client not understanding or trusting a novel auction approach, he said:

“Well, if you take a look, for example, we had proposed a design for the C-band auction, the auction of radio spectrum for use in 5G. It was proposed to the Federal Communications Commission, and they decided to do something more traditional instead. So that’s just an example.”

Even with all the data available today, bidders are often paying for uncertainty, Milgrom said.

“For example, if you were if you were bidding for oil on some tract and you don’t know how much oil is down there. The data isn’t going be available until you’ve drilled or if you’re bidding for radio spectrum and you want to know the value of it, it depends on what future demand is going to be or what’s going to happen with future technology.

“You have to make estimates of that that are only roughly guided by the data. If your estimates are wrong, you’re subject to the winner’s curse,” Milgrom said.

The economics prize, won by such luminaries as Paul Krugman and Milton Friedman in the past, was the final of the six awards in 2020, a year in which the Nobels have been overshadowed by the COVID-19 pandemic.

The traditional gala winners’ dinner in December has been cancelled and other parts of the celebrations are being held digitally to avoid the risk of spreading the infection.

The Nobel prizes for medicine, physics, chemistry, literature and peace were handed out last week.

The 10-million-Swedish-crown ($1.14 million) economics prize is not one of the original five awards created in the 1895 will of industrialist and dynamite inventor Alfred Nobel, but was established by Sweden’s central bank and first awarded in 1969.

The Norwegian Nobel Committee plans to go ahead with an award ceremony, albeit in a reduced format due to the coronavirus pandemic, in Oslo on Dec. 10, the anniversary of the death of Alfred Nobel. – Reuters