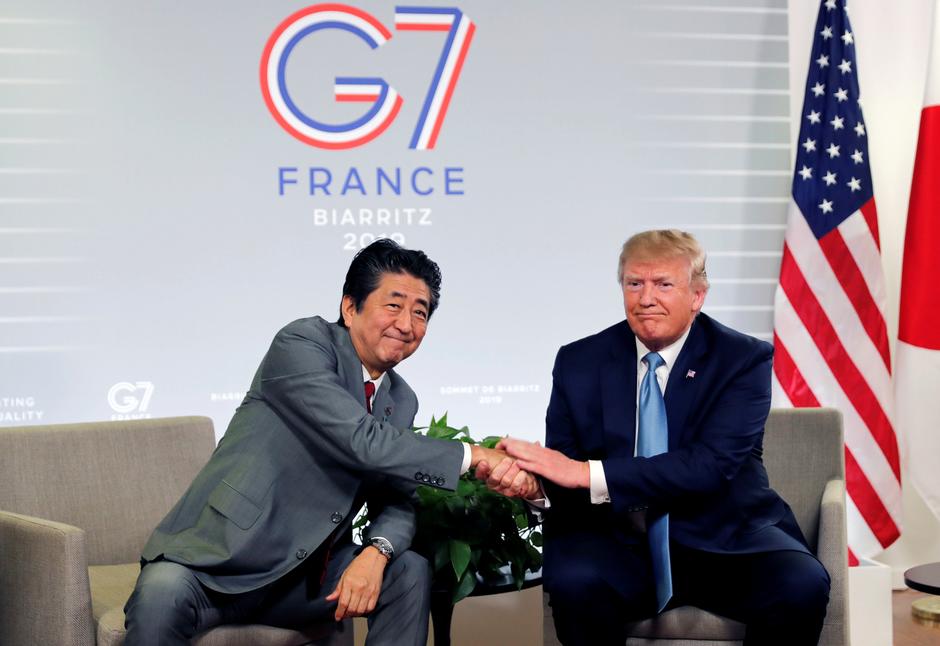 Tokyo, August 27, 2019 – Japan’s top government spokesman denied on Monday that Tokyo made too many concessions in trade talks with the United States, saying the fact the two countries were able to reach a broad agreement was “very valuable.”

The United States and Japan agreed in principle on Sunday to core elements of a trade deal that President Donald Trump and Prime Minister Shinzo Abe said they hoped to sign in New York next month.

A final agreement would cool a trade dispute between the two allies just as a trade war between the United States and China escalates, but some Japanese commentators say Tokyo gave up too much.

In announcing the deal with Abe on the sidelines of a Group of Seven summit in Biarritz, France, Trump made no public commitment to drop his threat to slap additional tariffs on Japanese automobiles.

Chief Cabinet Secretary Yoshihide Suga said he believed the United States would not resort to fresh tariffs because Trump and Abe had previously agreed that Washington would hold off while talks were under way.

“Japan and the U.S. have negotiated based on the joint statement last September,” Suga told a news conference in Tokyo. “Related ministers agreed based on that, so it was very valuable.”

Lighthizer said the deal, which covered agriculture, industrial tariffs and digital trade, would open up Japanese markets to U.S. goods and lead to a substantial reduction in tariffs on such items as beef.

Japan imports about $14 billion worth of U.S. agricultural products, and the agreement will open up markets to over $7 billion of such products, Lighthizer said, adding that beef, pork, wheat, dairy products, wine, and ethanol would benefit.

Trump said Japan has agreed to buy excess U.S. corn that is burdening farmers as a result of the tariff dispute between Washington and Beijing.

There was little information on what Japan gained from the deal. Japan’s Nikkei newspaper reported the United States will not cut the 2.5% tariff it applies on Japanese automobiles for now, and it will be discussed in separate talks.

In May, Trump declared that some imported vehicles and parts pose a national security threat. But he delayed a decision on imposing national-security tariffs under Section 232 of the Trade Expansion Act for up to six months to allow for more time for talks with the European Union and Japan.

Policymakers in Tokyo fret that Trump could still impose the tariffs or set import curbs on Japanese automakers. Getting Trump to scrap the tariff threat is a key element of success for Japan in signing a deal.

“It’s hard to say whether the deal is a favorable one for Japan, unless it’s exempted from the Section 232 auto tariffs,” said Junichi Sugawara, senior research officer at Mizuho Research Institute.

“The U.S. could make harsher demands ahead. When that happens, Japan doesn’t have any cards left,” he said. – Reuters