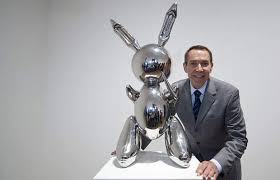 A 1986 “Rabbit” sculpture by American pop artist Jeff Koons sold for $91.1 million in New York on Wednesday, a record price for a work by a living artist, Christie’s auction house said.

The playful, stainless steel, 41 in (104 cm) high rabbit, regarded as one of the most celebrated works of 20th-century art, was sold for more than $20 million over its pre-sale estimate.

The identity of the “Rabbit” buyer was not disclosed.

The shiny, faceless oversized rabbit, clutching a carrot, is the second in an edition of three made by Koons in 1986.

The sale follows another record-setting auction price this week. On Tuesday, one of the few paintings in Claude Monet’s celebrated “Haystacks” series that still remains in private hands sold at Sotheby’s in New York for $110.7 million – a record for an Impressionist work. – Reuters