PyeongChang, February 12, 2018 — Japanese Prime Minister Shinzo Abe restated Tokyo’s opposition to revising a 2015 agreement on “comfort women” in talks with South Korean President Moon Jae-in on Friday, calling the deal a promise between nations and the basis of two-way ties. 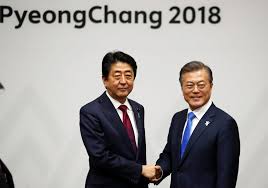 Abe also said, however, that the two leaders had agreed the two countries needed to create a “future-oriented” relationship, which Moon also underscored in opening remarks at their meeting in Pyeongchang, where Abe is to attend the opening ceremony of the Winter Olympics.

Japan and South Korea share a bitter history that includes Japan’s 1910-45 colonization of the peninsula and the use of comfort women, Japan’s euphemism for women – many of them Korean – forced to work in its wartime brothels.

A renewed feud over the issue has frayed ties even as America’s two key Asian allies confront the challenge of North Korea’s nuclear and missile programs.

Under the 2015 deal reached under Abe and Moon’s predecessor, Japan apologized to former comfort women and provided a 1 billion yen ($9 million) fund to help them.

South Korea earlier this year said the agreement failed to meet victims’ needs and called for more steps, but Japan insists the agreement should not be changed.

“The Japan-South Korea agreement is one that finally and irreversibly resolves (the issue). It is a promise between the two countries and the foundation of our bilateral ties,” Abe told reporters after meeting Moon in Pyeongchang, where he will attend the opening of the Winter Olympic Games.

Abe, whose decision to attend the Games angered some of his conservative backers, has said the agreement will not be altered “by even one millimeter”.

He also demanded South Korea remove statues of comfort women that have been installed in several countries in addition to South Korea, including the United States, Australia and Germany, Kyodo news agency reported.

Moon said the emotional damage sustained by the victims cannot be resolved through simple exchanges between governments and that both South Korea and Japan should continue efforts to heal their wounds, Blue House spokesman Kim Eui-kyeom told a briefing.

In 2014, the U.N. Human Rights Committee asked Tokyo to clarify the “comfort women” euphemism, with an independent expert on the panel calling for it to be replaced with “enforced sex slaves”.

Despite their differences, Moon and Abe decided to resume “shuttle diplomacy” as agreed last year and hold a trilateral summit between Japan, South Korea and China as soon as possible.

Abe said he had confirmed with Moon the need to maintain strong pressure on North Korea to get it to abandon its nuclear and missile programs, reiterating Tokyo’s stance that “talk for the sake of talk is pointless”.

A North-South Olympics detente has raised concerns in Washington and Tokyo that Seoul may ease up on the “maximum pressure” campaign by the United States and its allies to rein in North Korea. – Reuters