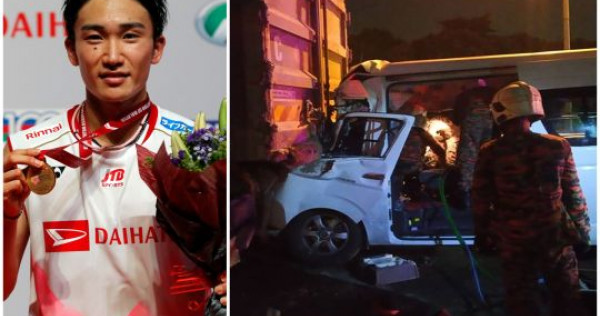 Kuala Lumpur, Jan 13, 2020 – A van driver was killed and four passengers, including Japanese badminton star Kento Momota, were slightly injured after the vehicle was involved in a collision with a lorry at Km13.7 of the Maju Expressway (MEX) at about 4.40am today.

The van, driven by Bavan Nageswarau, 24, was on its way to KL International Airport when it crashed into the lorry, which was said to be moving slowly.

Selangor Fire and Rescue Department director Norazam Khamis said Bavan, who was pinned to his seat, died at the scene.

Besides Momota, 25, the other passengers were assistant coach Yu Hirayama, 35, physiotherapist Morimoto Akifumi, 42, and William Thomas, 30, a technical officer with the Badminton World Federation

Norazam said 10 personnel from the Serdang Fire and Rescue Station went to the scene just before 5am.

He said the injured were taken to Putrajaya Hospital for treatment. Bavan’s body was also taken to the same hospital.

Putrajaya Hospital director Dr Nora’i Mohd Said said Momota, Hirayama, Akifumi
and Thomas, who suffered abrasion wounds, have been warded and are in stable condition. She said they will undergo CT scans.

Yesterday, Momota – the world’s No. 1 – won the Malaysia Masters men’s singles title at the Axiata Arena here, his first at the prestigious tournament after competing in it for many years.

He defeated former world champion Viktor Axelsen of Denmark in the final. – Bernama

Marina Bay beckons as Singapore gears up for ‘Davos in Asia’