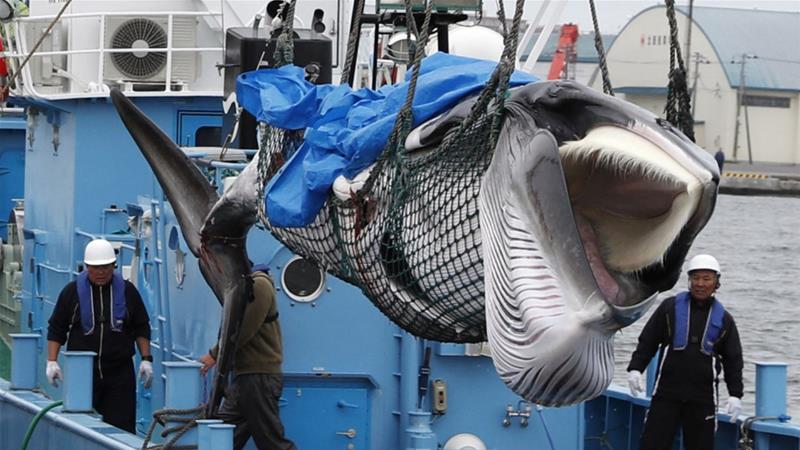 Kushiro, Japan, July 2, 2019 – A small Japanese fleet caught their first whales on Monday in Japan’s first commercial hunt in more than three decades, a move that has aroused global condemnation and fears for the fate of whales.

Japan has long said few whale species are endangered and announced in December it was leaving the International Whaling Commission (IWC) to resume hunting after years of campaigns by industry supporters and Prime Minister Shinzo Abe, whose constituency includes a city that has long whaled.

“If we had more whale available, we’d eat it more,” said Sachiko Sakai, a 66-year-old taxi driver in Kushiro, a gritty port city on the northernmost main island of Hokkaido, where five whaling ships were waved out of harbor in a brief ceremony early on Monday.

“It’s part of Japan’s food culture,” said Sakai, adding that she ate a lot of whale as a child. “The world opposes killing whales, but you can say the same thing about many of the animals bred on land and killed for food.”

The ships, which are set to be joined by vessels from the southern port of Shimonoseki, will spend much of the summer hunting for minke and Baird’s beaked whales.

Crew in orange life vests took positions on the decks as the blue-hulled ships sailed out of Kushiro, some with red banners fluttering from their masts.

By Monday afternoon, one ship returned with a roughly 8 meter-long minke whale. It was winched up from the vessel and taken off to be weighed and butchered.

Another ship caught a whale, but the vessel had not returned by evening and no further details were available.

“This is a great day. I’m really happy with the resumption of commercial whaling,” said Yoshifumi Kai, head of the Japan Small-type Whaling Association.

“We were able to take a splendid whale.”

Critics said the program was simply commercial whaling in disguise, after the meat of animals taken in scientific whaling ended up on store shelves and in restaurants.

This year’s quota for commercial whaling, including minkes, sei whales and Bryde’s whales, is 227, the Fisheries Agency said. The quota, to be set annually, is less than the 330 whales Japan harvested in the Antarctic until recently.

“We’re not at all embarrassed by what we do, it’s only natural,” Kai said, adding that the amount of whales Japan planned to hunt would not pose a threat to their population.

Environmentalists said the launch was delayed until after a summit of leaders of G20 major economies that Japan hosted, but whaling proponents have denied this.

“This is a sad day for whale protection globally,” said Nicola Beynon of Humane Society International.

“The word ‘research’ may have been removed from the side of the factory ship, finally ending Japan’s charade of harpooning whales under the guise of science, but these magnificent creatures will still be slaughtered for no legitimate reason,” Beynon, based in Australia, said in a statement.

Whaling is a tiny industry in Japan. Whale makes up about 0.1 percent of all meat eaten in a year, with about 300 people directly linked to whaling.

Japan’s annual supplies of about 4,000 tonnes to 5,000 tonnes amount to 40 gm to 50 gm for each citizen, or about the weight of half an apple. Even whaling supporters say building demand will take time.

Patrick Ramage, head of the International Fund for Animal Welfare, called the move a face-saving solution that could eventually lead Japan to abandon whaling.