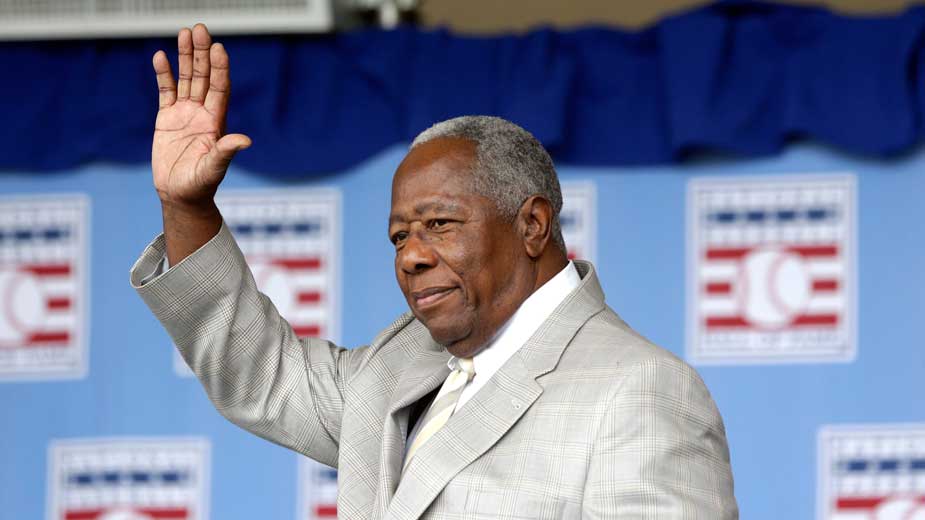 Atlanta, Jan 22, 2021 – Baseball Hall of Famer Hank Aaron, the quiet, unassuming slugger who broke Babe Ruth’s supposedly unbreakable record for most home runs in a career and battled racism in the process, died on Friday, the Atlanta Braves announced. He was 86.

Aaron died “peacefully in his sleep,” the Braves said in a statement.

Aaron joined the Braves management to become one of the few African-Americans in a baseball executive position after retiring as a player in 1976 with 755 career home runs.

Aaron’s hitting prowess earned him the nickname “Hammerin’ Hank,” and his power was attributed to strong wrists. He was somewhat shy and lacked the flair of contemporaries Willie Mays and Mickey Mantle.

Instead, Aaron played with a smooth, under-control style that made the game look so easy that some critics wondered if he was really giving his best. But Aaron was fueled by a powerful inner drive as he overcame an impoverished youth and racial hatred to become one of the greatest and most consistent baseball stars of all time.

Tributes to Aaron poured in from all corners of the worlds of sports, entertainment and politics, praising not only his achievements in baseball, but his courage in confronting the racism that dogged him even at the pinnacle of his career.

“His monumental achievements as a player were surpassed only by his dignity and integrity as a person,” Major League Baseball Commissioner Robert Manfred said in a statement.

Aaron was inducted into the Baseball Hall of Fame in 1982. His profile on the hall’s website notes that boxing legend Muhammad Ali called Aaron “the only man I idolize more than myself.” It quotes Mickey Mantle as calling Aaron “the best baseball player of my era. … He’s never received the credit he’s due.”

Aaron’s pursuit of Ruth’s ultimate home run record was one of the top sports stories of the 1970s and generated intense media coverage. He finished the 1973 season with 713 home runs – one short of Ruth’s record, which allowed drama to build for several months before the 1974 season began.

The Braves opened that season in Cincinnati and Aaron wasted no time, hitting a home run in his first at-bat to tie Ruth’s record.

A few days later, on April 8, fittingly at home in Atlanta, Aaron broke the record when he drove a fastball from the Los Angeles Dodgers’ Al Downing over the left field fence for No. 715. As Aaron trotted the bases at the tumultuous Atlanta Fulton County Stadium, two fans broke through security to briefly join him.

In the run-up to breaking the record, millions of fans cheered Aaron. Others jeered and some went even further. Bodyguards were assigned in 1973 after Aaron and his family became the targets of death threats and other harassment from racists who did not want a Black man to break such a sacrosanct record held by the charismatic Ruth.

Jackie Robinson, who was Aaron’s hero, had integrated the major leagues in 1947. Still, when Aaron arrived in 1954 the U.S. civil rights movement had yet to build momentum. Aaron sometimes found himself unable to stay in the same hotels or eat in the same restaurants as his white teammates, some of whom ostracized him.

The drive for the home run title left scars on Aaron. In his 1991 autobiography, “I Had A Hammer,” he described the final days of his quest by saying, “I thought I had earned the right to be treated like a human being in the city that was supposed to be too busy to hate.

“The way I saw it, the only thing Atlanta was too busy for was baseball. It didn’t seem to give a damn about the Braves, and it seemed like the only thing that mattered about the home run record was that a nigger was about to step out of line and break it.”

Because of the pressure and racial backlash, Aaron biographer Howard Bryant told National Public Radio the historic home run was “not a happy moment at all.”

Aaron said he kept some of the hate mail he received to remind him of the reality of racism.

The record-breaking season would be Aaron’s last in Atlanta. Before the 1975 season began he was traded to the Milwaukee Brewers. The trade allowed Aaron, then 40, to finish his Major League career in the city where it began. It also gave the Brewers, then a sixth-year expansion team, a marquee player who could draw more fans to home games. Because the Brewers were in the American League at the time, the aging star could play as a designated hitter and avoid the chance of injuring himself playing the outfield.

In 2015, Aaron told Milwaukee sportscaster Tom Pipines: “I came here when I was 19 years old, and made a lot of mistakes, but I’ve never once been in this city and the fans have booed me. They accepted me for what I am and I’m just so grateful.”

His career home run record stood until 2007 when Barry Bonds of the San Francisco Giants broke it. Bonds, whose career was shrouded by accusations of steroid use, finished with 762 homers.

Aaron won the National League’s Most Valuable Player award in 1957 when he helped the Braves to a World Series victory over the New York Yankees, hitting .322, driving in 132 runs and blasting 44 home runs.

“I hope they’ll say Hank Aaron was a complete ball player who hit some home runs and helped his team,” he said.

In 1952, when he was 18, Aaron was playing shortstop for the Indianapolis Clowns in the Negro League, and his .400-plus batting average attracted major league scouts. The Braves, then playing in Boston, signed him and he was a standout in two minor league seasons.

Brought up to the Braves for spring training in 1954 after the team had moved to Milwaukee, Aaron switched to the outfield and became one of the game’s outstanding defensive players as well as a feared slugger.

Aaron was called one of the greatest natural hitters of all time by Hall of Famers Paul Waner and Rogers Hornsby, who both coached him early in his career.

In addition to working for the Braves after his playing career, Aaron owned fast-food restaurants and auto dealerships.

The father of four children, Aaron was divorced from his first wife, Barbara, in 1971. In 1972, he married Billye Williams, co-host of an Atlanta TV talk show.

In 1999 MLB established the Hank Aaron Award for the player deemed the best hitter in both leagues. – Reuters