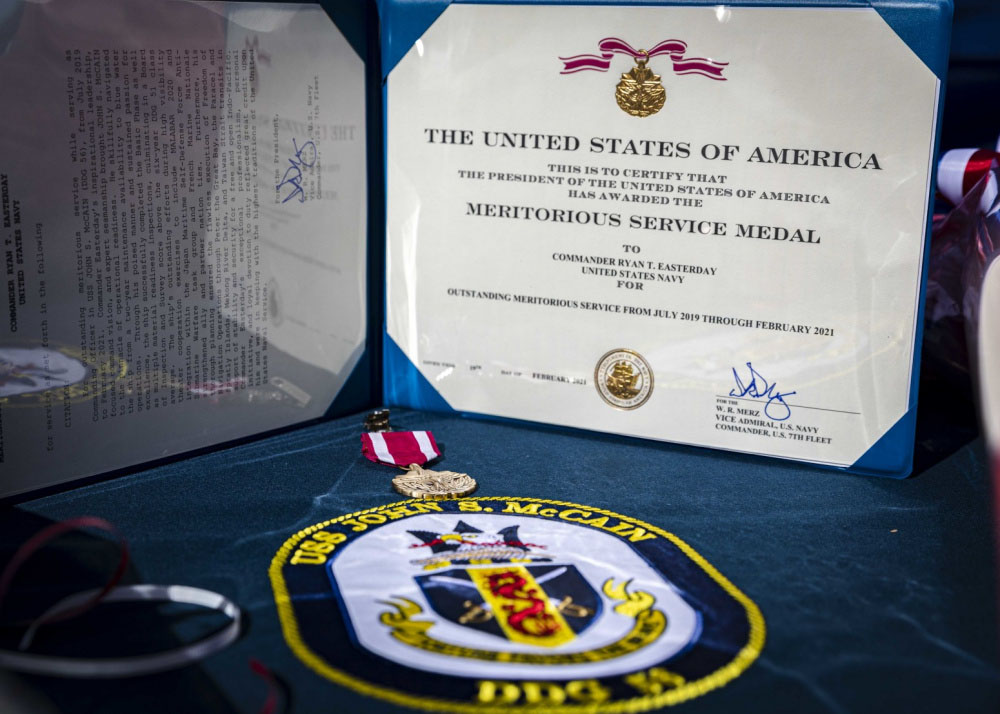 Easterday has served as the commanding officer of John S. McCain since July 2019. Under his leadership, John S. McCain has gone through sea trials, Board of Inspection and Survey (INSURV), an inspection which assesses a ship’s material condition and war fighting readiness, numerous multinational exercises, and finally returning the ship back to the waterfront and deployment-ready.

“The crew of ‘Big Bad John’ is a family and a team, with a winning attitude and total commitment to victory,” said Easterday. “Teamwork depends on trust, on honesty, integrity and respect for our shipmates and ourselves, and I am incredibly proud of what this team has accomplished.”

Tran most recently served as the executive officer aboard John S. McCain and is now ‘fleeting up’ to take command of the ship as its 19th commanding officer and continue to lead the crew through the rest of deployment and its upcoming homeport shift to Washington.

During his speech, Tran expressed his eagerness to lead the ship and crew.

“Friends and family, to stand before you today as the 19th commanding officer of John S. McCain, is a testimony to the boundless opportunities that America offers its citizens, native or immigrant,” said Tran. “I am a witness to the unlimited potential of what our Navy offers its young men and women who answer the call to serve.”

Since late September of 2020, John S. McCain has conducted a number of multinational exercises with allied nations to include operations with the Royal Australian Navy (RAN) in the Andaman Sea, conducted operations with three different Carrier Strike Groups in the South China Sea, and last year’s iteration of Malabar, alongside the RAN, Indian Navy and JMSDF.

“To the Officers, Chief’s Mess and crew, thank you for your energy, your enthusiasm and your commitment to excellence,” said Easterday. “It’s only going to get more challenging as we continue to raise the game, and what lies in store for you will require you to continue to give your utmost to ensure this ship is ready to fight and win. I know you will.”