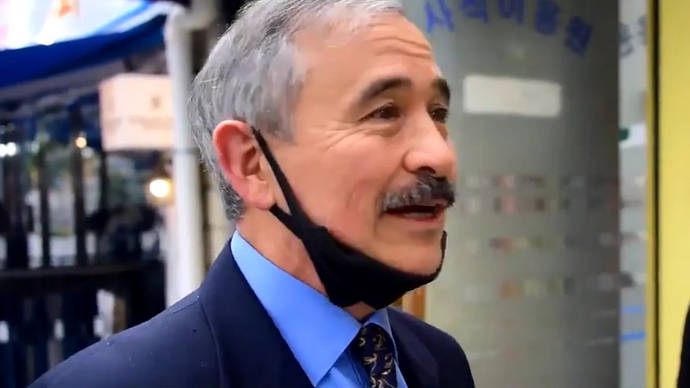 Seoul, July 27, 2020 — The US ambassador to South Korea has shaved off his mustache to stay “cool” during the hot summer, months after his facial hair drew unusual criticism from anti-US activists who likened it to those of former Japanese colonial leaders.

The US embassy on Saturday posted a video on Twitter of Harry Harris visiting a classic local barbershop in Seoul to remove his mustache, which he said together with a face mask makes him feel too hot and uncomfortable.

“I haven’t seen this face in years,” Harris told the barber after the shave. “I feel so much cooler now.”

“Glad I did this. For me it was either keep the ‘stache or lose the mask. Summer in Seoul is way too hot & humid for both. #COVID guidelines matter & I’m a masked man!” he said in a separate tweet.

Early this year, his mustache became a source of criticism from some politicians and anti-US activists who compared it with those of Japanese officials during their 1910-45 colonial rule. Some even linked it to his Japanese-American heritage, as Harris was born to a Japanese mother and an American father.

The controversy came as the allies have been at odds over a raft of issues in recent years, including South Korea’s desire to restart inter-Korean economic cooperation. Relations between North and South Korea have been dogged by stalled nuclear talks between Washington and Pyongyang, as well as by international sanctions imposed over the North’s weapons programs.

Harris has urged Seoul to seek US consultations before pursuing any initiatives with the North to avoid any “misunderstandings” that could trigger sanctions.

The envoy has said privately he does not plan to stay on beyond the November US presidential election, regardless of whether President Donald Trump wins another term. — Reuters