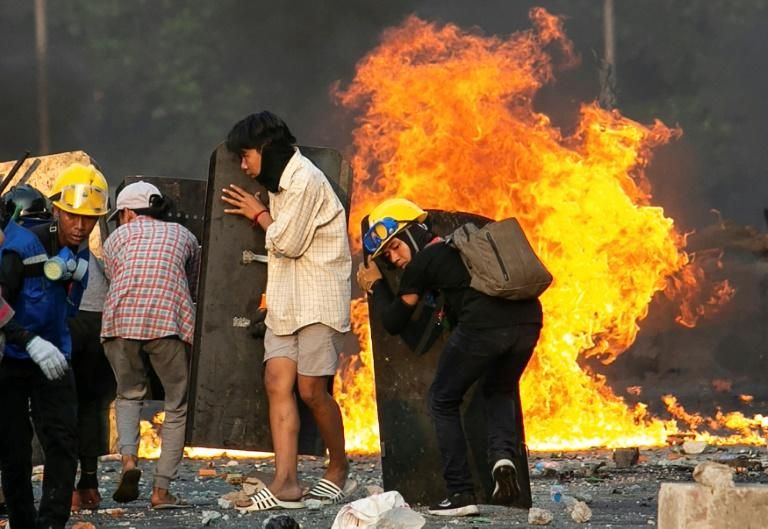 Yangon, March 29, 2021 – Myanmar security forces killed at least five protesters on Monday, three of them in the main city of Yangon, witnesses and media reported, as activists called on ethnic minority forces in the diverse nation to back their campaign against military rule.

After the bloodiest day since the Feb. 1 military coup with 114 deaths on Saturday, thousands took to the streets in towns across the country, determined to show their opposition to the relapse into military rule after a decade of democratic reform.

At least two people were killed in the Yangon district of South Dagon when security forces moved in to clear protesters’ barricades, residents said.

“We can confirm two were killed in our ward,” said one neighborhood resident who asked to be identified as just Win.

Security forces fired a much heavier-calibre weapon than usual to clear a barricade in South Dagon, witnesses said and a video clip showed. It was not immediately clear what type, although a community group posted a picture of a soldier with a grenade launcher.

State television said security forces used “riot weapons” to disperse a crowd of “violent terrorist people” who were destroying a pavement and one man was wounded.

One man was killed earlier in another Yangon neighborhood, when security forces fired on protesters and a Red Cross team, witness Thiha Soe told Reuters.

Police and a junta spokesman did not answer calls seeking comment. Myanmar’s Red Cross said in a message it was checking the report.

Based on a tally by the Assistance Association for Political Prisoners advocacy group, 464 civilians have been killed since the coup.

Despite the violence, crowds turned out in towns across the country, according to media and social media posts.

One of the main groups behind the protests, the General Strike Committee of Nationalities, called in an open letter on Facebook for ethnic minority forces to help those standing up to the “unfair oppression” of the military.

“It is necessary for the ethnic armed organizations to collectively protect the people,” the group said.

Insurgents from different ethnic groups have battled the central government for decades for greater autonomy. Though many groups have agreed to ceasefires, fighting has flared in recent days between the army and forces in both the east and north.

Heavy clashes erupted on the weekend near the Thai border between the army and fighters from Myanmar’s oldest ethnic minority force, the Karen National Union (KNU).

About 3,000 villagers fled to Thailand when military jets bombed a KNU area after a KNU force overran an army outpost and killed 10 people, an activist group and media said.

The Free Burma Rangers activist group said 2,009 people had been forced to return to the Myanmar side of the border on Monday evening.

A Thai provincial official said the refugees had not been pushed back but were on the Thai side of a border river.

“We don’t want to have an exodus, evacuation into our territory but we will observe human rights,” Prayuth told reporters in Bangkok.

He also dismissed suggestions Thailand was backing the Myanmar junta.

Both the KNU and KIA have expressed support for the anti-coup movement and called on the army stop the violence against civilian protesters.

Myanmar’s military has for decades justified its grip on power by saying it is the only institution capable of preserving national unity. It seized power saying that November elections won by Nobel laureate Aung San Suu Kyi’s party were fraudulent, an assertion dismissed by the election commission.

Suu Kyi remains in detention at an undisclosed location and many other figures in her party are also in custody.

U.N. Special Rapporteur for Myanmar Tom Andrews said the army was carrying out “mass murder” and called on the world to isolate the junta. U.S. Trade Representative Katherine Tai said the United States was suspending all trade engagement with Myanmar until the return of a democratically elected government.

But foreign criticism and Western sanctions have failed to sway the generals.

China and India have declined to condemn the coup and Russia has maintained its close ties with a visit by a Deputy Defense Minister Alexander Fomin and a pledge to beef up military ties. The Kremlin said Russia’s long and constructive ties with Myanmar did not signify its approval of “tragic events” there.

The U.N. Security Council is due to be briefed on Myanmar in a closed meeting on Wednesday, at Britain’s request, diplomats said. Norway urged its citizens to leave because of the violence. – Reuters