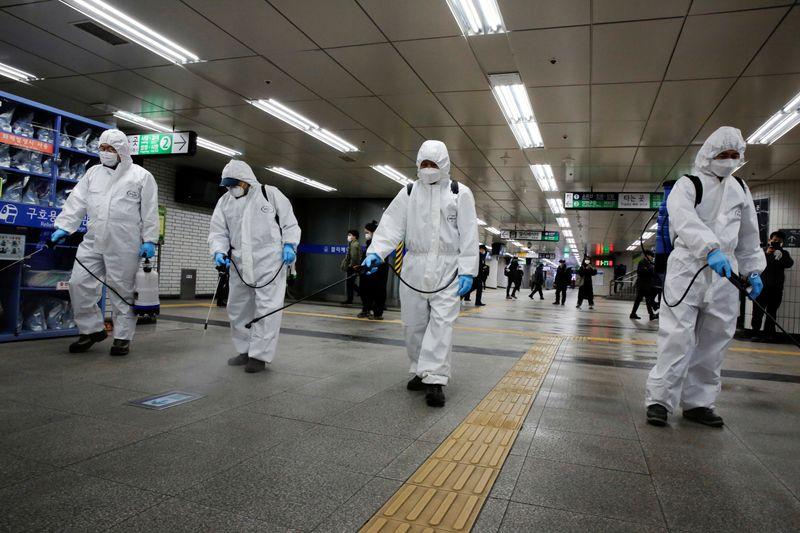 Seoul, March 11, 2020 – South Korea reported a jump in new coronavirus cases on Wednesday, reversing 11 days of slowing infections, as authorities tested hundreds of staff at a Seoul call center where the disease broke out this week.

Another 242 new cases were reported, compared with 35 a day earlier, bringing the total to 7,755 in Asia’s worst outbreak outside mainland China, the Korea Centers for Disease Control and Prevention (KCDC) said. The official death toll rose by four to 63.

The daily tally of new cases in South Korea peaked at 909 on Feb. 29, as authorities tested about 200,000 followers of a fringe Christian church at the center of the nation’s epidemic.

The infection rate had slowed in recent days, raising hopes that South Korea might be bringing the virus under control.

But new clusters at the call center in the capital Seoul, and among teachers and students of a dance school with classes around the country, have kept authorities on high alert for a fresh spike in infections.

“The mass infections at the call center could be the beginning of a fresh tide that leads to a widespread regional outbreak,” Seoul Mayor Park Won-soon told a briefing.

At least 90 cases confirmed this week, including 62 in Seoul, were linked directly to the call center located near a public transportation hub connecting Seoul with Incheon and other major cities, the KCDC said.

Authorities say they are testing the 200 employees who worked on the floor where the first cases were discovered, while monitoring the other 550 in the center’s workforce who are self-quarantined.

Many of the workers who tested positive were found to have used the subway and buses for their daily commute, prompting extensive disinfection work around key stations, city officials said.

President Moon Jae-in visited health officials at the KCDC headquarters in Cheongju, 140 km (87 miles) south of Seoul, for the first time since the crisis began. He encouraged officials to increase their efforts to contain the virus.

Around 90% of cases in South Korea, including 140 confirmed on Wednesday, were in the worst-hit city of Daegu, where the church is based, and the nearby province of North Gyeongsang.

“There has been a stagnating trend in Daegu cases despite a slight increase today,” said Yoon Tae-ho, director general for public health policy.

“The situation happening in the Seoul metropolitan area is unlikely to lead to that of the Daegu region … but we will make maximum efforts to stave off further spread.” – Reuters