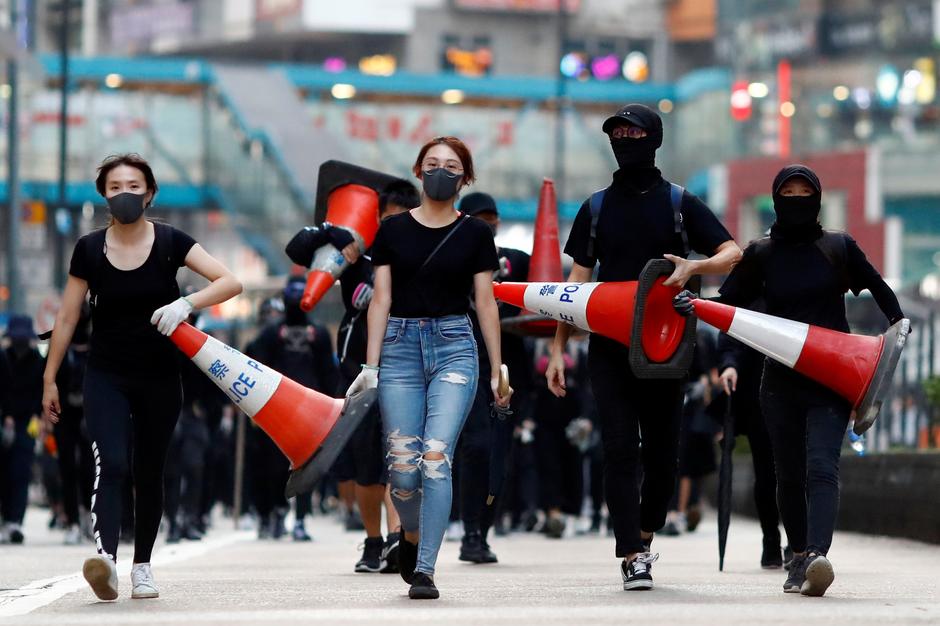 Hong Kong, November 11, 2019 – Hong Kong police shot and critically wounded a protester and a man was set on fire on Monday in violence that prompted leader Carrie Lam to denounce “enemies of the people” and drew a chilling warning from a senior Chinese newspaper editor.

Protesters threw petrol bombs at police after a weekend of clashes across the Chinese-ruled territory, marking a dramatic escalation in more than five months of often violent pro-democracy unrest.

“The violence has far exceeded the call for democracy and the demonstrators are now the people’s enemy,” Hong Kong chief executive Lam said in a defiant televised address.

“If there’s still any wishful thinking that by escalating violence, the Hong Kong … government will yield to pressure, to satisfy the so-called political demands, I’m making this statement clear and loud here: that will not happen.”

Police fired tear gas in the narrow streets of the Central business district where some protesters, crouching behind umbrellas, blocked streets as office workers crowded the pavements and hurled anti-government abuse.

Some passersby took cover inside the Landmark mall, one of the oldest and most expensive, as volleys of tear gas rained down.

There have been almost daily protests in Hong Kong, but it was rare for tear gas to be fired during working hours in Central, lined with bank headquarters and top-brand shops. Some offices closed early.

China has a garrison of up to 12,000 troops in Hong Kong who have kept to barracks throughout the unrest, but it has vowed to crush any attempts at independence, a demand for a very small minority of protesters.

The editor in chief of China’s Global Times tabloid, published by the state-owned People’s Daily, said Hong Kong police had nothing to be scared of.

“You have the backing of not only Hong Kong and Chinese people, but also Chinese soldiers and People’s Liberation Army in Hong Kong,” Hu Xijin wrote on his blog. “They can go into Hong Kong to provide support at any time.”

Police fired live rounds at close range at protesters in Sai Wan Ho on the eastern side of Hong Kong island and one 21-year-old protester was wounded. Police said the victim was in critical condition.

Resident Anson Yip, 36, said protesters were building a road block when police ran to the scene.

“They didn’t fight and the police ran and directly shot. There were three sounds, like ‘pam, pam, pam’,” Yip said.

Video footage showed polystyrene boxes and other debris littering a crossing and blocking traffic. A protester wearing a white hoodie and mask walks towards a policeman, as if to challenge him. The officer draws his gun and points it at him at close range and grabs him round the neck.

As the officer holds the man with his left hand, he shoots another approaching masked protester at close range with his right hand. Three shots ring out and the man falls to the ground.

The fallen man is pinned to the ground by an officer holding a gun to his head. The man in white escapes.

A friend visited the wounded man in hospital.

“My friend didn’t actually attack the police or do anything,” Rigan, 19, said. “They just shot him. My friend is optimistic, friendly and willing to help others.”

The man fell just a couple of meters from a large makeshift memorial to a student who died from a fall in a car park last week, the blood staining the street next to candles, flowers, and anti-government posters.

“The live rounds fired by police are clear evidence of reckless use of force,” Amnesty International Hong Kong said in a statement. “Another policeman was seen driving at high speed into a group of protesters on a motorbike. These are not policing measures – these are officers out of control with a mindset of retaliation.”

Police said the motorcycling officer had been suspended.

Video images online also showed a man dousing petrol on another and setting him on fire outside Ma On Shan Plaza in the New Territories. Engulfed in flames, the man was able to rip off his shirt and douse the blaze. Police said he was in critical condition.

More than 60 people were wounded on Monday, Lam said in her address.

The unrest also spread to densely populated Mong Kok on the Kowloon peninsula, often the site of street clashes. Police used water cannon and tear gas to try to break up protesters who regrouped, digging up bricks to throw at police and blocking Nathan Road, a major artery. A taxi driver who drove close to the crowds was beaten.

The clashes looked set to last into the night as they have done many times before.

Police said more than 120 places has been either vandalized or blocked on Monday. Some 266 people had been arrested since last Monday.

Protesters are angry about what they see as police brutality and meddling by Beijing in the freedoms guaranteed to the former British colony by the “one country, two systems” formula put in place when the territory returned to Chinese rule in 1997.

China denies interfering and has blamed Western countries for stirring up trouble.

The violence comes after student Chow Tsz-lok, 22, died in hospital last week following a fall as protesters were being dispersed by police.

Police fired tear gas at Chinese University, where students hurled petrol bombs and barricaded the campus like a fortress. There were at least four arrests.

“I feel a strong sense of helplessness,” said one Chinese University student who gave his name as Chan. “Who wouldn’t want to attend class if they could? The government still isn’t listening to us.”

The university said it would again suspend classes on Tuesday.