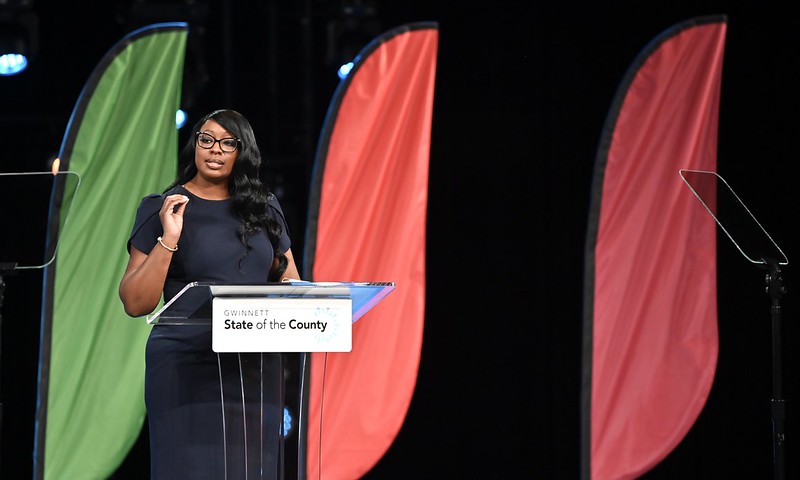 Speaking to a live audience of 545 individuals and 210 online viewers, she share her insights to her plans for the future of Gwinnett under her administration.

“You may not have heard the phrase the ‘Gwinnett Standard,' but I can guarantee you've felt it,” Hendrickson said.

“What’s normal here would be amazing almost anyplace else,” Hendrickson said. “And what’s ordinary in Gwinnett is extraordinary elsewhere.”

The county's new chairwoman share her thoughts on issues such as housing, food security for struggling families, economic development, transportation and law enforcement relations with the community.

She shared some of the initiatives that were launched prior to Dec 2020 and some of the recent project announcements such as purchase of Gwinnett Place Mall and redevelopment of former Olympic Tennis Center site.

Hendrickson also praised the effort to establish a new Police Citizens Advisory Board in January.

County government values feedback from its residents so the Board of Commissioners and the Police Department created a Citizens Advisory Board to receive public input and shape policy, Hendrickson said.

As the county strives for police accountability, she said, it must also make intentional investments toward addressing some of the systemic issues that lead to crime, such as poverty, substance abuse, mental health issues and lack of education.

She recognized the contributions of other agencies during the pandemic, such as the school districts, Gwinnett Chamber of Commerce, and Gwinnett Health Department, and praised teachers for being a “remarkable force in maintaining normalcy for our children.”

She challenge the audience and fellow Commissioners to uphold the Gwinnett Standard.

“You expect the best from our community and drive us forward into the future with the highest standards in place. You inspire us all to maintain the Standard to support sound decisions and innovations to ensure that Gwinnett’s future is bright and that we continue to set new standards of excellence.”