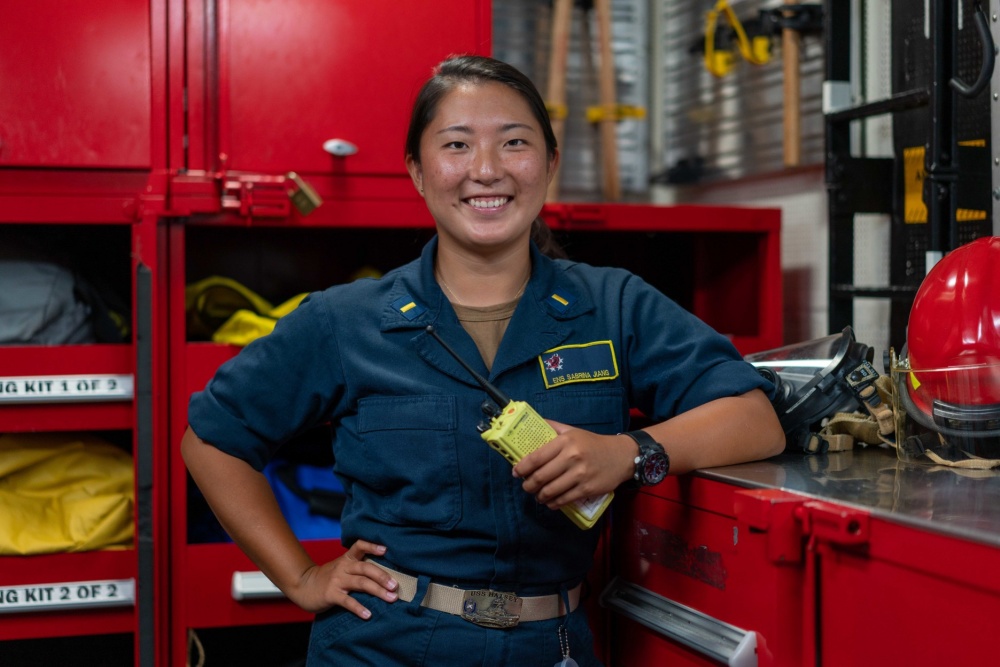 Ensign Sabrina Jiang is the Repair Officer serving aboard USS Halsey, homeported out of Pearl Harbor, Hawaii. Halsey is underway in 7th Fleet conducting operations in the Indo-Pacific while assigned to the forward deployed Destroyer Squadron (DESRON) 15.

The Ship’s Repair Officer leads the Repair division in the maintenance and operation of all installed and portable damage control equipment. They help oversee hundreds of maintenance checks each week to ensure Halsey is mission-ready.

“I enjoy my job as the Repair Officer because of how passionate my Sailors are about damage control,” said Jiang. “If there’s a casualty, they run towards danger without a second thought and that kind of selflessness is admirable.”

The Repair Officer works with the Damage Control Assistant to ensure damage control readiness throughout the ship. Keeping the ship in a constant state of mission-readiness to defend against any casualty is paramount.

“The various methods for fighting casualties require extensive hands-on training and continuous maintenance,” said Jiang. “My Sailors constantly train so if something happens, their instincts kick in and I know I can depend on them to save our ship.”

A U.S. Navy destroyer is a multi-mission ship that can operate independently or as part of a larger group of ships at sea. The ship is equipped with a vertical launching system, tomahawk missiles, torpedoes, guns, and Phalanx Close-In weapons systems.

Halsey is underway conducting operations in support of security and stability in the Indo-Pacific while assigned to Destroyer Squadron (DESRON) 15, the Navy’s largest forward-deployed DESRON and the U.S. 7th Fleet’s principal surface force..