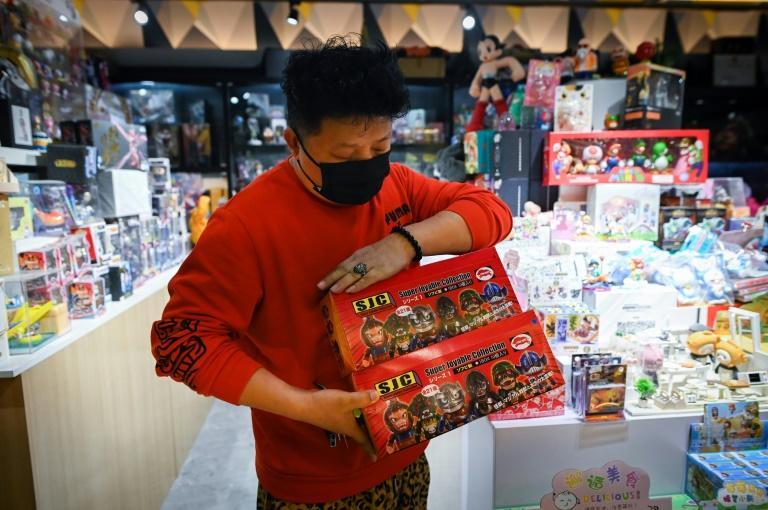 Beijing, April 28, 2021 – Tiny unicorns and cartoon girls in clown costumes line the shelves of Wang Zhaoxue’s study in Beijing — tokens of China’s mania for “blind boxes” that have made fortunes for toymakers and even caught the attention of those in power.

The 18-year-old music student is one of the legions of young Chinese hooked on snaffling up the toys — from pop art-inspired figurines to mini-archaeological treasures — to complete whole “ranges” through endless purchases.

The toys, first popularized in Japan, have fixated China in recent years, also driving a booming second-hand market and decorating the desks of white-collar workers and livestreams of box-opening influencers across the country.

The blind box market was worth 7.4 billion yuan (US$1.14 billion) in 2019, according to market research firm Qianzhan Intelligence, which added that could soar to 30 billion yuan by 2024.

Similar to the collectibility of baseball cards, most fist-sized packages hold toys, from fairies to miniature King Kongs, but buyers can often be landed with one they already have.

But once in a while, a rare or even “hidden” item — one that does not appear in advertisements for the range — will emerge from the box, the holy grail of the collecting craze.

Wang said she has in the past queued overnight for new releases at toy conventions and proudly shows off autographed limited-edition figurines in her family’s Beijing apartment.

Her older family members are also fervent toy collectors — her mother displays by the front door a group of baby-faced figures riding cats.

“It was something quite novel, which got my attention,” said Wang, who has now amassed hundreds of the toys.

The element of mystery is a big part of the fun, although “if you shake it, and then feel the box, you can sometimes deduce what’s inside”.

Wang has turned her passion into a small business, customizing duplicates and selling them online for hundreds of yuan apiece.

On the vibrant second-hand market, rare figures can fetch dozens of times the original price of an unopened box, which usually costs US$10 to US$20.

Liu Xiaoli, a nickname, has been collecting blind box toys since 2018.

The advertising professional, in her thirties, pulls thousands of followers to a Bilibili video channel where she documents her box-opening adventures.

She has adopted a technique of weighing some boxes before opening them to build the anticipation of what might be inside.

“It feels good to see them all arranged neatly,” said Liu, who has more than 200 toys.

Her favorites are modeled after a cherubic, doe-eyed character called Molly, produced by Beijing-based mystery toymaker Pop Mart, which made its US$670 million debut on the Hong Kong stock exchange last year.

The competition is so intense that the most sought-after toys, such as the archaeology-themed blind boxes sold by Henan province’s official museum, sell out almost immediately after their online release.

But the craze has not escaped criticism, with state media earlier this year comparing the trend to gambling and warning that the products bred addiction.

In a commentary in January, Xinhua called for more regulation of the sector and said the boxes should not be sold “blindly” to consumers, accusing some brands of “persuading consumers to keep buying and even hyping up a speculative second-hand market”.

“One of the reasons behind the success of blind boxes is that they divide their products into different categories of rarity,” Steffi Noel, a consumer analyst at Shanghai-based Daxue Consulting, told AFP.

“They set a barrier, expressing the idea that not everyone can get the most special boxes. It generates a sense of competition.” – AFP