Warning: unlink(/tmp/jnewslibrary-wMqyJ2.tmp): No such file or directory in /home/customer/www/gasiantimes.com/public_html/wp-admin/includes/class-wp-filesystem-ftpext.php on line 142
 Flight data, voice recorders retrieved from Nepal crash site - Georgia Asian Times
ABOUT
Advertise in GAT
Contact us

Many of the passengers on the flight were returning home to Pokhara, though the city is also popular with tourists since it’s the gateway to the Annapurna Circuit hiking trail.

Pokhara, January 16, 2023 — Search teams retrieved the flight data and cockpit voice recorders Monday of a passenger plane that plummeted into a gorge on approach to a new airport in the foothills of the Himalayas, officials said, as investigators looked for the cause of Nepal’s deadliest plane crash in 30 years.

At least 69 of the 72 people aboard were killed, and officials believe the three missing are also dead. Rescuers combed through the debris, scattered down a 300-meter-deep (984-foot-deep) gorge, for them.

Many of the passengers on the flight were returning home to Pokhara, though the city is also popular with tourists since it’s the gateway to the Annapurna Circuit hiking trail. A pharmaceutical marketing agent was traveling to be with his sister as she gave birth, and a minister of a Korean religious group was visiting the school he founded.

On Monday evening, relatives and friends were still gathered outside a local hospital. Many consoled one another, while some shouted at officials to speed up the post mortems so they could take the bodies of their loved ones home for funerals.

It’s still not clear what caused the crash, which took place less than a minute’s flight from the airport on a mild day with little wind.

Nepal’s Civil Aviation Authority said the aircraft last made contact with the airport, which began operations only two weeks ago, from near Seti Gorge before crashing. 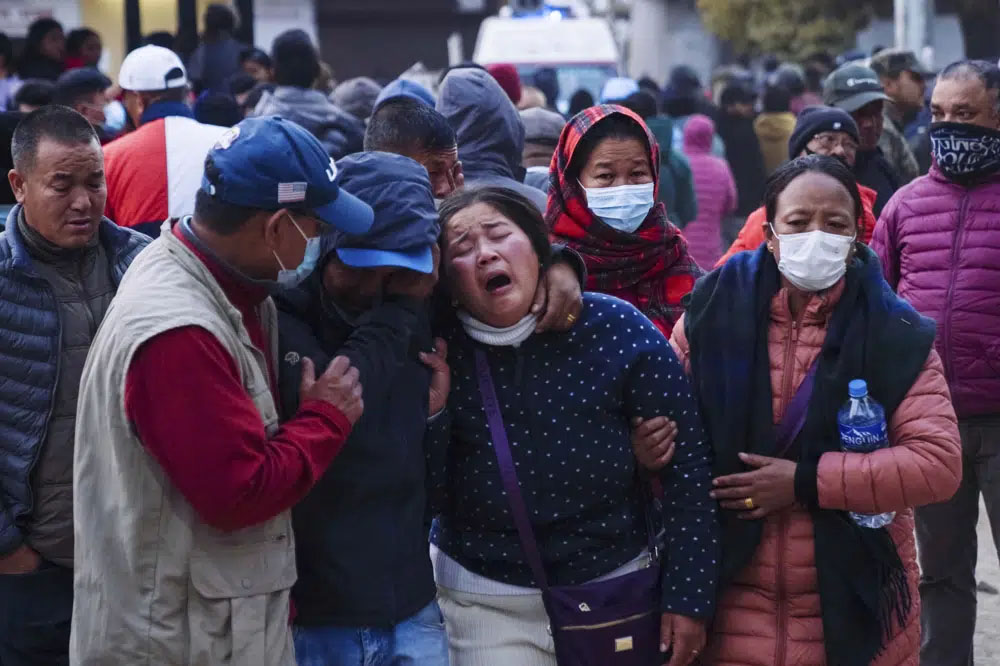 A witness who recorded footage of the plane’s descent said it looked like a normal landing until the plane suddenly veered to the left.

“I saw that, and I was shocked,” said Diwas Bohora. “I thought that today everything will be finished here after it crashes, I will also be dead.”

After it crashed, red flames erupted and the ground shook violently, Bohora said. “Seeing that scene, I was scared,” he added.

Amit Singh, an experienced pilot and founder of India’s Safety Matters Foundation, said Bohora’s video appears to show a stall, a situation in which a plane loses lift, especially likely at low airspeeds.

The twin-engine ATR 72 aircraft, operated by Nepal’s Yeti Airlines, was completing the 27-minute flight from the capital, Kathmandu, to Pokhara, 200 kilometers (125 miles) west. It was carrying 68 passengers, including 15 foreign nationals, as well as four crew members, Nepal’s Civil Aviation Authority said in a statement. The foreigners included five Indians, four Russians, two South Koreans, and one each from Ireland, Australia, Argentina and France. – AP


Warning: unlink(/tmp/jnewsfirstload-HwgP6x.tmp): No such file or directory in /home/customer/www/gasiantimes.com/public_html/wp-admin/includes/class-wp-filesystem-ftpext.php on line 142