France beat Morocco 2-0 to reach the World Cup final against Argentina, in a historic match between the defending champion and Africa’s first ever semifinalist.

Paris, December 15, 2022 — Crowds in Paris and other French cities erupted in shouts of joy as France advanced to the World Cup final Wednesday, while disappointed Morocco fans mingled with the exuberant supporters of the winning team, paying tribute to the African country’s unprecedented achievement.

Football fans streamed to the Champs-Elysees avenue in Paris, shooting off firecrackers and red flares, to an unending chorus of honking cars.

On the famous avenue, many were brandishing French flags and singing “we are in the final.”

Some Moroccan fans, wrapped in the North African country’s flag, also cheered their team in the streets of the French capital.

France beat Morocco 2-0 to reach the World Cup final against Argentina, in a historic match between the defending champion and Africa’s first ever semifinalist.

Supporters from both teams gathered in bars from the boulevards of Paris to the streets of Morocco’s capital Rabat, from the cosmopolitan French Riviera city of Nice to the historic Moroccan city of Marrakech.

Celebrating the victory near the Bastille square, in central Paris, Adrien Vignau, a 22-year-old Parisian, praised a “great victory for France” and said he was looking forward to the final against Argentina and its star player, Lionel Messi.

“Bravo to Moroccans,” said Parisian Corentin Voiseux. “Tonight it’s not only France that wins but all of the French-speaking people. … We are together and Moroccans will be with us at the final,” he added.

In central Madrid, fans celebrated on Sol Square after the match, some with red Moroccan flags draped on their shoulders, jumping up and down, and some wearing the French tricolor.

In Belgium, scuffles briefly broke out in Brussels after the game and authorities countered with water cannon and teargas after they were targeted. One and a half hours later, a tense calm had returned. Media reports spoke of 40 detentions. There also was some unrest in northern Antwerp.

In Paris, riot police vans lined the broad thoroughfare and the base of the imposing Arc de Triomphe, and white-helmeted officers roamed the crowd on the Champs-Elysees. Minor incidents briefly broke out, leading officers to occasionally use teargas to move the crowd away.

Despite their sadness, Moroccan fans expressed pride in their team, highlighting the history-making moment this game represented.

A Rabat resident, Fatima Zahra Attaq said that she was “a bit sad, but this is football. … After all, they gave their best and made us proud to reach this stage of the competition.”

“The national team made us dream,” said Reda Hakam, also working in Rabat. “The dream is now over. I am not sad. I am actually very proud.” 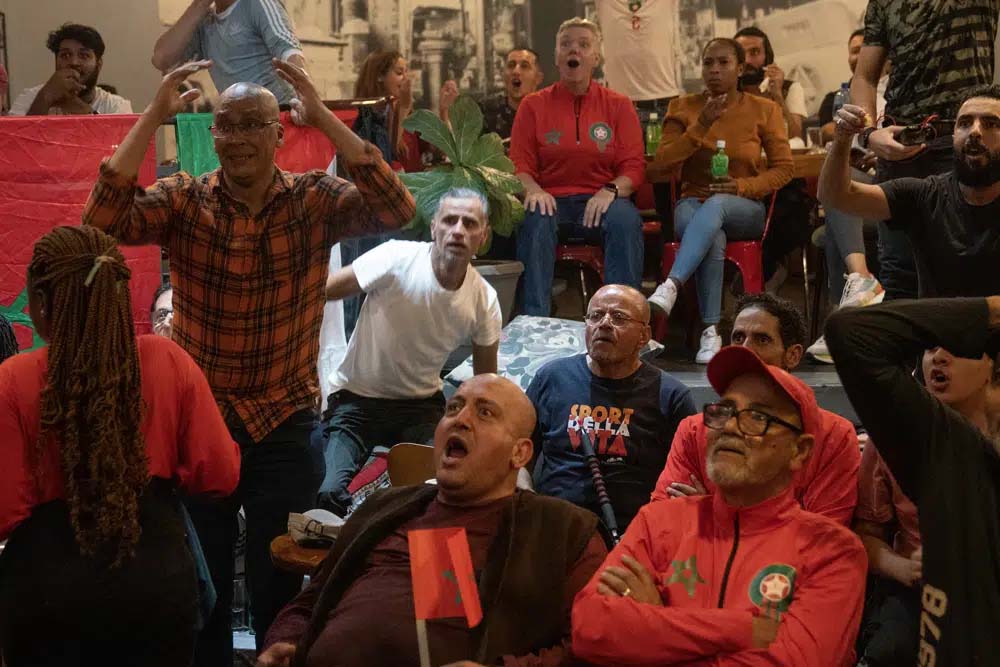 Kenza El Amrani said that “I think Moroccans should wipe the tears off their faces and cheer for this team.”

Those who attended the game in Qatar also paid tribute to the performance and fighting spirit of the African team.

“Morocco played with their hearts,” said Ayaz Dhrolia, a fan from Canada whose face was painted in Morocco colors as he left Doha’s Al Bayt Stadium. “They won the hearts of millions and millions of people around the world, well appreciated. Thanks, Morocco.”

Youssra Zhhata, a Moroccan woman who was at the game, stressed that “they made it to the semifinals and that’s an accomplishment. … And we had Africans, Arabs, everyone supporting us.”

Morocco was under French rule from 1912-56, giving the match political and emotional resonance for both nations.

Morocco has exceeded all expectations in Qatar by beating second-ranked Belgium in the group stage and then eliminating European powerhouses Spain and Portugal in the knockout phase to reach the semifinals.

“All of Gaza is now sad for this result. We were hoping they would win,” said Wael al-Riffi, a Gaza resident, as he held Morocco’s flag.

Crowds also gathered in the Israeli-occupied West Bank to watch the game.

The Palestinians felt empathy from the Moroccan national team as players held the Palestinian flag several times at the World Cup. – AP


Warning: unlink(/tmp/jnewsfirstload-kFYA7u.tmp): No such file or directory in /home/customer/www/gasiantimes.com/public_html/wp-admin/includes/class-wp-filesystem-ftpext.php on line 142