Warning: unlink(/tmp/jnewslibrary-PM4hbo.tmp): No such file or directory in /home/customer/www/gasiantimes.com/public_html/wp-admin/includes/class-wp-filesystem-ftpext.php on line 142
 Brazil fails again in quest to end World Cup drought - Georgia Asian Times
ABOUT
Advertise in GAT
Contact us

Neymar scored in extra time to tie Pelé’s scoring record with 77 goals and give Brazil the lead, but Croatia equalized with Bruno Petkovic in the 117th minute and won the shootout after Rodrygo and Marquinhos missed their penalties for Brazil.

Doha, December 9, 2022 — Brazil’s hopes of ending a 20-year wait for a World Cup title vanished in a 4-2 loss to Croatia in a penalty shootout in the quarterfinals.

Neymar scored in extra time to tie Pelé’s scoring record with 77 goals and give Brazil the lead, but Croatia equalized with Bruno Petkovic in the 117th minute and won the shootout after Rodrygo and Marquinhos missed their penalties for Brazil.

Neymar didn’t get to take his penalty after a controversial decision by Brazil coach Tite to leave him for last.

Brazil arrived as one of the favorites for the title, but there was concern about what it could do after Neymar got injured in the first game and his participation in the tournament was put into doubt.

Brazil was still able to comfortably advance past the group stage despite a 1-0 loss to Cameroon with its reserve squad, a result that ended the Selecao’s 17-game unbeaten streak in group games and cast doubt about the overall quality of the team. It was also the first time Brazil lost to an African nation in World Cups.

It didn’t help that Brazil was marred by injuries. In addition to Neymar, Tite lost Danilo after the opening game, and Alex Sandro after the second match against Switzerland. Alex Telles and Gabriel Jesus got hurt in the game against Cameroon and had to be dropped from the squad.

But Brazil was back in the conversation about title favorites when both Neymar and Danilo recovered and Brazil routed South Korea 4-1 in the round of 16. Neymar scored one of the goals that put Brazil in the quarterfinals for the eighth straight time. The team celebrated its goals by dancing, and even coach Tite got involved, attracting some criticism from outsiders.

There were high expectations going forward, and against Croatia the five-time champions were a few minutes away from returning to the last four for the first time since 2014. But the defense allowed a late breakaway that led to Petkovic’s goal with a shot that deflected off defender Marquinhos.

Just like that, Brazil was out of the World Cup again. 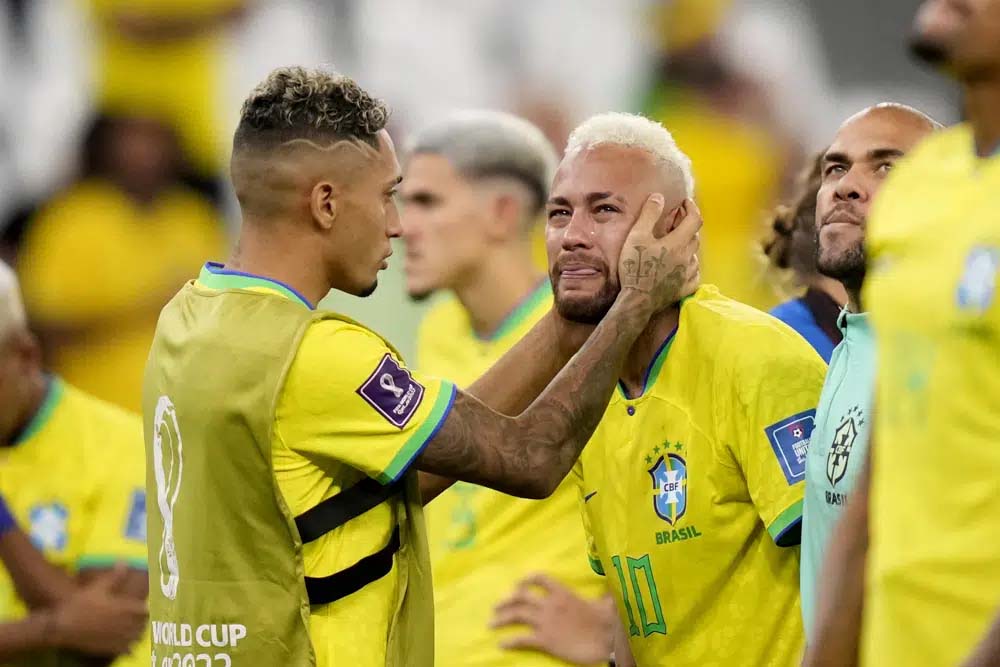 “It feels like a nightmare. It’s hard to believe this is happening,” said Neymar, who had to be consoled by teammates as he couldn’t stop crying after the match.

Tite was criticized for picking Neymar to take the fifth penalty kick, which ultimately never happened. He was also questioned for not keeping the team organized defensively after taking the lead and before conceding the late breakaway that led to Croatia’s equalizer. There were also questionable substitutions, and many didn’t like his decision not to stay with his players and instead go into he locker room immediately after the shootout loss.

Tite won’t really have to answer for anything as he left the national team as planned, saying his time with Brazil was over. He had already announced his decision before the World Cup and was not changing his mind.

“It’s the end of a cycle,” Tite said. “The loss hurts, but I’m at peace with myself right now.”

Whether the 30-year-old Neymar would be back with Brazil remained uncertain, as he said it wasn’t the time to talk about his future so soon after the loss to Croatia.

More certain to bid farewell to the Selecao were veterans Thiago Silva and Dani Alves. The 39-yead-old Alves became the oldest Brazil player in a World Cup, surpassing the 38-year-old Silva.

Nine Brazilian players in Qatar were 30 or older, including Casemiro, Danilo and Alisson.

Brazil was yet to announce a replacement for Tite and the Brazilian soccer confederation said it would only start discussions about the new coach in January. Rumors were that Brazil could try to hire a foreign coach to leads its squad, with Portuguese Jorge Jesus among the front-runners.

The new coach will have talented youngsters at his disposal, including Vinícius Júnior, Rodrygo, Gabriel Martinelli and Antony.

“We have to lift our heads and try to move on,” the 30-year-old Casemiro said.

Brazil does not have any matches scheduled so far, but its focus will quickly turn to the 2026 World Cup as South American qualifiers are expected to begin in March 2023.

Brazil has played in every World Cup, and qualifying for 2026 shouldn’t be a problem, especially with the region now earning six direct spots plus a playoff berth. – AP

Warnock win makes it official: Georgia is a ’24 battleground


Warning: unlink(/tmp/jnewsfirstload-Aqbolb.tmp): No such file or directory in /home/customer/www/gasiantimes.com/public_html/wp-admin/includes/class-wp-filesystem-ftpext.php on line 142