Warning: unlink(/tmp/jnewslibrary-3OuK4F.tmp): No such file or directory in /home/customer/www/gasiantimes.com/public_html/wp-admin/includes/class-wp-filesystem-ftpext.php on line 142
 Taiwan president resigns as party leader after election loss - Georgia Asian Times
ABOUT
Advertise in GAT
Contact us

Voters in Taiwan overwhelmingly chose the opposition Nationalist party in several major races across the self-ruled island in an election in which lingering concerns about threats from China took a backseat to more local issues.

Voters in Taiwan overwhelmingly chose the opposition Nationalist party in several major races across the self-ruled island in an election in which lingering concerns about threats from China took a backseat to more local issues.

Tsai had spoken out many times about “opposing China and defending Taiwan” in the course of campaigning for her party. But the party’s candidate Chen Shih-chung, who lost his battle for mayor of Taipei, only raised the issue of the Communist Party’s threat a few times before he quickly switched back to local issues as there was little interest, experts said.

Tsai offered her resignation on Saturday evening, a tradition after a major loss, in a short speech in which she also thanked supporters.

“I must shoulder all the responsibility,” she said. “Faced with a result like this, there are many areas that we must deeply review.”

While international observers and the ruling party have attempted to link the elections to the long-term existential threat that is Taiwan’s neighbor, many local experts do not think China — which claims the island as its territory to be annexed by force if necessary — has a large role to play this time around.

“The international community has raised the stakes too high. They’ve raised a local election to this international level, and Taiwan’s survival,” said Yeh-lih Wang, a political science professor at National Taiwan University.

During campaigning, there were few mentions of the large-scale military exercises targeting Taiwan that China held in August in reaction to U.S. House Speaker Nancy Pelosi’s visit.

“So I think if you can’t even raise this issue in Taipei,” Wang said. “You don’t even need to consider it in cities in the south.”

Candidates from the Nationalist party won the mayoral seat in Taipei, Taiwan’s capital, as well as in Taoyuan, Taichung and New Taipei city.

Taiwanese were picking their mayors, city council members and other local leaders in all 13 counties and in nine cities. There was also a referendum to lower the voting age from 20 to 18, which was defeated, according to local media.

Not all votes had been formally counted by the time of his speech, but Chiang and the other candidates’ numerical lead allowed them to declare victory.

Kao Hung-an, a candidate in the relatively new Taiwan People’s Party, won the mayoral seat in Hsinchu, a city home to many of Taiwan’s semi-conductor companies. 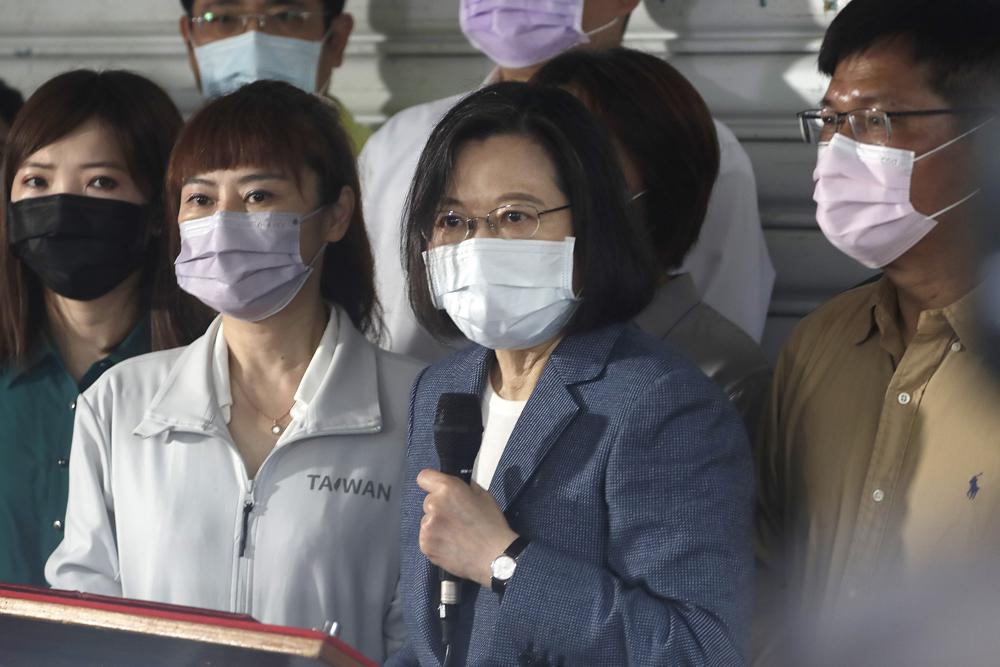 Campaigns had resolutely focused on the local: air pollution in the central city of Taichung, traffic snarls in Taipei’s tech hub Nangang, and the island’s COVID-19 vaccine purchasing strategies, which had left the island in short supply during an outbreak last year.

The defeat for the ruling DPP may be partly due to how it handled the pandemic.

“The public has some dissatisfaction with the DPP on this, even though Taiwan has done well relatively speaking in pandemic prevention,” said Weihao Huang, a political science professor at National Sun Yat-sen University.

At an elementary school in New Taipei City, the city that surrounds Taipei, voters young and old came early despite the rain.

Yu Mei-zhu, 60, said she came to cast her ballot for the incumbent Mayor Hou You-yi. “I think he has done well, so I want to continue to support him. I believe in him, and that he can improve our environment in New Taipei City and our transportation infrastructure.”

Tsai came out early Saturday morning to cast her ballot, catching many voters by surprise as her security and entourage swept through the school.

“If the DPP loses many county seats, then their ability to rule will face a very strong challenge,” said You Ying-lung, chair at the Taiwanese Public Opinion Foundation that regularly conducts public surveys on political issues.

The election results will in some ways also reflect the public’s attitude toward the ruling party’s performance in the last two years, You said.

Some felt apathetic to the local race. “It feels as if everyone is almost the same, from the policy standpoint,” said 26-year-old Sean Tai, an employee at a hardware store.

Tai declined to say who he voted for, but wants someone who will raise Taipei’s profile and bring better economic prospects while keeping the status quo with China. “We don’t want to be completely sealed off. I really hope that Taiwan can be seen internationally,” he said. – AP


Warning: unlink(/tmp/jnewsfirstload-Lvijz6.tmp): No such file or directory in /home/customer/www/gasiantimes.com/public_html/wp-admin/includes/class-wp-filesystem-ftpext.php on line 142