Southeast Asian leaders do little to raise pressure on Myanmar

With violence in Myanmar spiraling out of control since the military seized power in 2021, the Association of Southeast Asian Nations has been trying to implement a five-point plan for peace, so far with little effect.

Phnom Penh, November 11, 2022 — Southeast Asian leaders did little to ramp up pressure on Myanmar to comply with their plan for peace, agreeing Friday to a course of action that largely kicks the matter down the road.

With violence in Myanmar spiraling out of control since the military seized power in 2021, the Association of Southeast Asian Nations has been trying to implement a five-point plan for peace, so far with little effect.

Already, the group has banned leaders of Myanmar, also known as Burma, from participating in its top-level events, such as the ongoing summit in Phnom Penh, Cambodia.

A faction led by Indonesian President Joko Widodo, whose country assumes ASEAN’s rotating chair after Cambodia, had been pushing for that ban to be broadened to exclude Myanmar from other events — something urged by human rights groups.

But in their “review and decision on the implementation of the five-point consensus” released Friday, the leaders decided to task ASEAN’s coordinating council “to further review Myanmar’s representation at ASEAN meetings, if the situation requires.”

Thailand, backed by Cambodia and Laos, opposed the Indonesian proposal, arguing that extending the ban on representation would amount to a de facto suspension, according to a diplomat with access to the discussions who spoke on condition of anonymity to discuss the closed-door meetings.

The leaders also dismissed the idea of a full suspension of Myanmar from the group, reaffirming in their decision that the country “remains an integral part of ASEAN.”

The group did stress the need for “an implementation plan that outlines concrete, practical and measurable indicators with (a) specific timeline” — but did not agree on one, tasking their foreign ministers to develop it.

They also said they would call upon the U.N. “and our external partners” to support ASEAN’s efforts to implement the five-point consensus, but gave no further details. 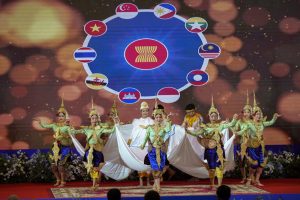 The ASEAN plan calls for the immediate cessation of violence, a dialogue among all parties, mediation by an ASEAN special envoy, provision of humanitarian aid and a visit to Myanmar by the special envoy to meet all sides.

Myanmar’s government initially agreed to the plan but has made little effort to implement it.

Ahead of the final deliberations, Widido stressed the importance of coming to an agreement, saying that the situation in the country was worsening and that Indonesia was “deeply disappointed.”

“The situation in Myanmar must not hold ASEAN hostage,” he told reporters on the sidelines of the summit.

In another decision, the leaders agreed “in principle” to admit East Timor as its 11th member.

East Timor, also known as Timor-Leste, applied for membership in 2011. ASEAN will now formalize a roadmap for full membership, to be approved at next year’s summit.

At the official opening ceremony Friday, Cambodia’s prime minister broadly cautioned his fellow Southeast Asian leaders against general complacency, saying that even though economies are gradually recovering as the COVID-19 pandemic wanes, there is much work to be done.

Prime Minister Hun Sen warned that the region is “now at the most uncertain juncture” as it seeks to promote “peace, security and sustainable growth.”

He spoke broadly of “strategic challenges we all face” and did not delve into specifics during his opening address.

“We are now enjoying the fruits of our efforts and moving towards sustainable growth,” he said. “We should always be vigilant as the current socio-economic situation in ASEAN as well as in the whole world remains fragile and divided.”

He said the summit’s theme, “Addressing Challenges Together,” should be considered “time relevant.”

“There is a saying that disasters and crises can bring out the best in people,” Hun Sen said. “In this connection, I believe that all of us gathering here today share a sense of urgency to work together.” – AP