Chicago: The Musical dazzle at the Fox Theatre

The Musical takes place in the 1920s and depicts a tale of two women, Velma Kelly, played by Logan Floyd, and Roxie Hart, played by Katie Frieden, who have committed murders in the hustling bustling town of Chicago.

Atlanta, October 23, 2022 – Prepare to be razzle dazzled by the award-winning Broadway show, Chicago: The Musical, in Atlanta’s very own Fox Theatre, from October 21st, 2022 to October 23rd, 2022. Chicago: The Musical takes place in the 1920s and depicts a tale of two women, Velma Kelly, played by Logan Floyd, and Roxie Hart, played by Katie Frieden, who have committed murders in the hustling bustling town of Chicago. The storyline, of which is filled with corruption, deception, and witty humor, is engagingly portrayed through astounding musical numbers throughout the show.

Opening with the first musical number, “All That Jazz”, Velma Kelly captures the audience and begins to tell her story alongside the third musical number, “Cell Block Tango” in order to explain why she murdered her husband and sister. As adultery is the main motive for both Velma and Roxie’s murders, “Cell Block Tango” says that those who wronged them “had it coming”. It is then explained that Velma caught her husband and sister together thus justifying her crime in her opinion; following Velma’s story, Roxie’s story is divulged. Roxie commits adultery with a man named Fred Casely, played by Ed Gotthelf; feeling unsatisfied with her husband Amos Hart, played by Brian Kalinowski, Roxie gets entangled with Fred Casely because she is looking for romance, fame, and publicity of which Fred promises to her. However, after realizing Fred would be unable to get her the long-desired fame and attention she had been hoping for, Roxie murders him for manipulating her and only using her for her lust. 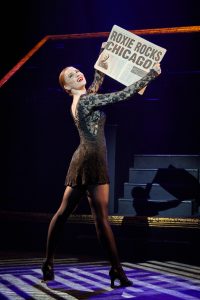 Desperate to not be convicted of their crimes, Velma and Roxie meet with Billy Flynn, played by Jeff Brooks, a notorious lawyer who frequently takes cases on behalf of making easy money due to his confidence and continued success with fooling court participants into believing his defendants are innocent due to his manipulation of the truth when presenting cases. As Velma fades from relevancy, Billy speeds up Roxie’s trial date as she is becoming more popular, thus making Velma despise her. Prior to Roxie’s court date, Velma describes to Roxie the tactics she is going to use to get out of being convicted. Because Roxie’s court date came before Velma’s, Roxie steals all of Velma’s tactics and, with the help of Billy Flynn, Roxie becomes a free woman. As the story comes to an end, Roxie and Velma close the show with highly entertaining musical numbers, titled “Nowadays” and “Hot Honey Rag”, thus both fulfilling their dreams of fame.

Overall, Chicago: The Musical is a must-see show playing in Atlanta for a limited time only. Grab your tickets to enjoy and celebrate 25 years of razzle dazzle!