Suzuka, October 9, 2022 — Max Verstappen is now a two-time Formula One world champion, both titles awarded under bizarre and unprecedented circumstances long after he crossed the finish line.

The Red Bull driver won the rain-shortened Japanese Grand Prix on Sunday and didn’t learn he was champion until F1′s governing body penalized Charles Leclerc after the race.

“The championship obviously did not come the way this time around,” Verstappen initially said after climbing from his car following his 12th victory of the season. The Dutchman even apologized to the crowd on the track’s public address system.

Seconds later, Verstappen was told he was a two-time world champion and crew members and friends suffocated him with hugs.

“Once I crossed the line I thought: ‘It was an amazing race, good points again. But I’m not world champion yet.’”

The 25-year-old said he was tipped off when his mechanics started to cheer, but said he was still confused.

“I don’t mind it was a little confusing,” he said. “I find it actually quite… funny.”

Verstappen’s first title was won in last year’s season finale at Abu Dhabi, where seven-time champion Lewis Hamilton dominated the race until a late caution. It was then that race control set in motion an unprecedented sequence of events when since-fired race director Michael Masi allowed for a late restart.

Verstappen passed Hamilton to win the race and his first championship, but Mercedes disputed the way the race ended and the teams argued with the FIA for hours before Verstappen was finally, officially, named champion and able to celebrate.

Two titles for Verstappen signals a changing of the guard in F1, even if Verstappen’s championship-clinching races will forever be remembered for their controversial endings.

In Suzuka, Verstappen started from the pole in pouring rain only for the race to be stopped after two laps as several cars crashed. The race resumed two hours later, but only 28 of the 53 laps were completed and Verstappen led the entire way.

The Belgian Grand Prix a year ago was not completed in the rain and F1 for the sixth time in history awarded only half points for that shortened event. So nearly all the teams figured Sunday’s race was only going to be worth half points again.

The entire paddock seemed surprised when the FIA then ruled full points would be awarded. But even that wasn’t enough: Leclerc received a post-race penalty that dropped the Ferrari driver from second to third and officially gave Verstappen the points margin needed to clinch the title with four races remaining.

“So then we had enough points, so we were world champions again,” summarized Verstappen. “It’s a great feeling, but when I crossed the line I didn’t believe that we would have won the title right there.”

The race was messy from the start in the rain when Carlos Sainz Jr. spun and was knocked out of the race, and Chinese driver Zhou Guanyu also had a dramatic spin but continued.

Pierre Gasly complained on his radio that he passed a recovery vehicle that was improperly on the track as the safety car emerged just as the race was red-flagged. It triggered rage throughout the paddock because in 2014, French driver Jules Bianchi collided with a recovery vehicle on the Suzuka track. Bianchi was placed in an induced coma and died nine months later, and he was one of Gasly’s closest friends.

“What is this tractor on track? I passed next to it,” Gasly radioed his AlphaTauri team. “This is unacceptable. Remember what has happened. Can’t believe this.”

The FIA said after the race that it is investigating the deployment of safety vehicles.

“We lost Jules Bianchi here and that should never, ever happen, so there needs to be a full investigation as to why there was a recovery vehicle on the circuit,” Horner said.

And on social media Perez complained: “How can we make it clear that we never want to see a crane on track? We lost Jules because of that mistake. What happened today is totally unacceptable! I hope this is the last time ever I see a crane on track!”

Long after the race, Gasly was penalized for speeding under red flag conditions.

Meanwhile, Verstappen never looked back even when he wasn’t sure he’d clinch the title Sunday.

But just like last year, when Mercedes threatened for four days to take the Abu Dhabi finish to the highest sporting appeals panel, Verstappen is again waiting to see if his two titles are intact.

The FIA is investigating if Red Bull exceeded last year’s spending cap and a decision is expected to be announced Monday. It could involve financial penalties, or even strip Verstappen of his 2021 title. After the mess in Suzuka, stripping Verstappen of last year’s title would be a public relations nightmare for F1 and the FIA.

Regardless, Verstappen has proved his worth on the track over the last two seasons and this year has been unstoppable.

Verstappen has won in all fashions this season — from the back of the field, driving through traffic and even recovering from an in-race spin. Sunday’s race was another example of his dexterity as mistakes, errors and poor racing conditions never slowed him.

Verstappen essentially had the title wrapped up before the summer break, and it was never a question of if he would win — but when and in how many races. 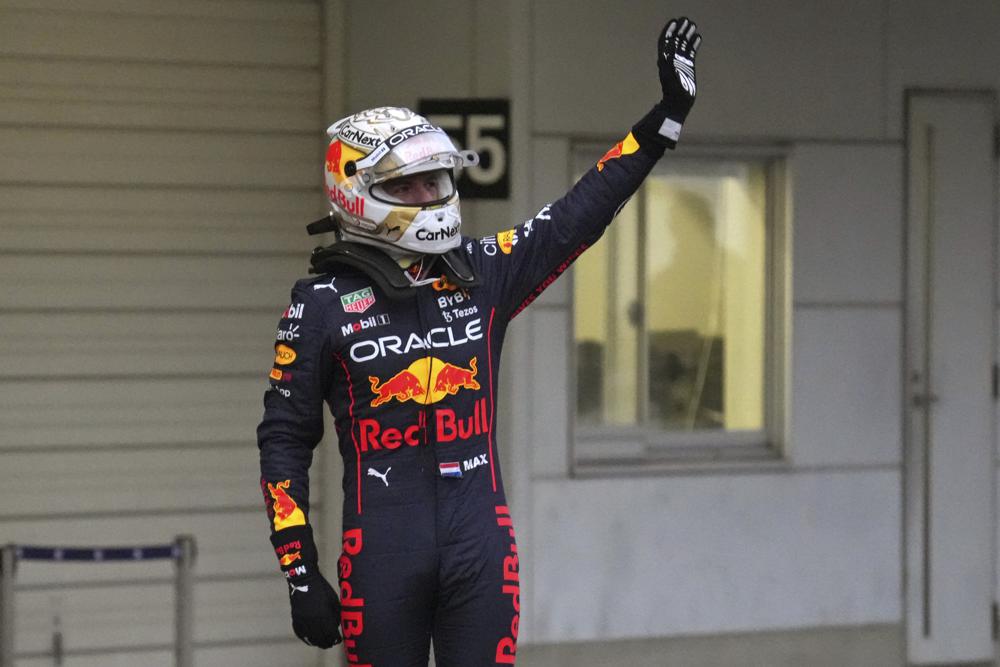 Winning two titles in a row moves Verstappen into elite company. It also marks a changing of the guard that could mark the end of the Hamilton era.

Some of the modern-era drivers who have won at least two in a row include Hamilton, Sebastian Vettel, Fernando Alonso, Michael Schumacher, Ayrton Senna, and Alain Prost.

Verstappen has edged past Hamilton as Formula One’s main man. The 37-year-old Hamilton, whose Mercedes has been disappointing this year, has not won a race since Saudi Arabia, the penultimate race of 2021.

Verstappen has racing is his blood. His father, Jos Verstappen, ran more than 100 races in F1, but failed to ever win. The elder Verstappen was once a teammate of Schumacher with Benetton for part of the 1994 season.

His mother, Sophie, was a top-ranked kart racer and a skilled driver in her own right.

Verstappen, who was born in Belgium and learned racing there, drives under the flag of the Netherlands, where after school each day he’d cross the border to his father’s race shop and work on becoming a future F1 champion.

He is the youngest driver to ever make a Formula One debut, at 17 driving for Toro Rosso in 2015.

With 12 victories this season he is nearing the season record of Schumacher and Vettel, both with 13. Schumacher won 13 races in 2004, Vettel did it in 2013.

Schumacher had one of the most dominating seasons in 2002 when he won the title at the French Grand Prix with six races still to go. That was when F1 was a 17-race season. – AP