Warning: unlink(/tmp/jnewslibrary-bo8Weh.tmp): No such file or directory in /home/customer/www/gasiantimes.com/public_html/wp-admin/includes/class-wp-filesystem-ftpext.php on line 142
 Herschel Walker campaigning at Indian American and Asian American GOP Rally - Georgia Asian Times
ABOUT
Advertise in GAT
Contact us

In a rare campaign appearance, Walker took several jabs at his opponent incumbent Senator Raphael Warnock's on the proposed debate scheduled on October 14 in Savannah.

Chris Carr, Georgia's Attorney General, who was appointed by Governor Deal, delivers the opening remarks at the Walker campaign rally. Nikki Haley, the former U.S. Ambassador to the United Nations and former Governor of South Carolina, followed up with campaign remarks at the rally.

In a rare campaign appearance, Walker took several jabs at his opponent incumbent Senator Raphael Warnock's on the proposed debate scheduled on October 14 in Savannah.

“If you see him (Warnock), tell him to show up. Tell him to put on the big man pants to show up,” said Walker on the proposed debate.

“They don't want to talk about inflation, crimes, and the border. They are the reasons that we have all these problems today. You will get more of it if he gets re-elected in November.”

“The way they resolve it is by throwing money at it. That is not the way to solve the problem,” said Walker on those points.

“A house divided cannot stand. I am about uniting the people, not dividing them like my opponent,” said Walker, who was hand picked by former President Donald Trump to run for the U.S. Senate seat.

“My opponent also says that you cannot serve the military and serve God at the same time. Does he not know that we are the greatest country in the world because we have the greatest military – that is why we have to support our military.”

Nikki Haley spoke on stage before Walker's appearance. As a former U.S. Ambassador of the U.S. to the United Nations, she shared her insights on the failure of United State foreign policy under the Biden Administration.

“We would not have the war in Ukraine if we have the blunder in Afghanistan,' said Haley in pointing out that Senator Warnock is part of the problem in supporting the pullout.

Haley and Walker are on several campaign stops in their campaign across the state.

Herschel Walker and Raphael Warnock are on a tight race for the upcoming Georgia Senate Seat in the November election. Recent election polls indicated Walker leads the race by a point. 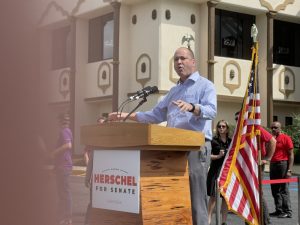 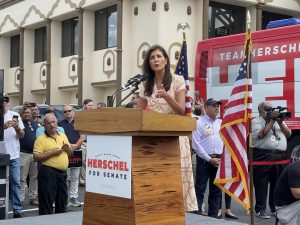 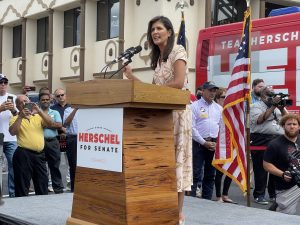 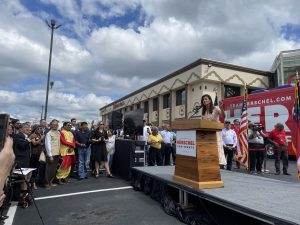 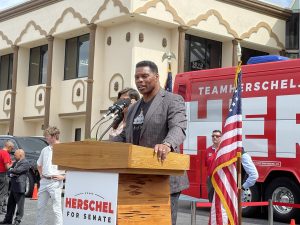 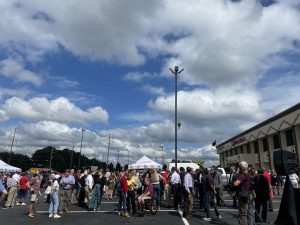 
Warning: unlink(/tmp/jnewsfirstload-eEJWFw.tmp): No such file or directory in /home/customer/www/gasiantimes.com/public_html/wp-admin/includes/class-wp-filesystem-ftpext.php on line 142