The “Peace Bell Tower,” a replica of the bell tower at Shoganji Temple in Konu, Miyoshi City, Hiroshima Prefecture, was carved from Japanese cypress and assembled in Atlanta by four carpenters from Hiroshima.

Atlanta, September 7, 2022– The Japan-America Society of Georgia and the Japanese Chamber of Commerce of Georgia, in cooperation with the Consulate General of Japan in Atlanta, the Japan External Trade Organization (JETRO) Atlanta, the City of Miyoshi, the City of Americus, and many community partners, have completed construction of a traditional Japanese bell tower for President Carter’s “Peace Bell” on the grounds of The Carter Center. The “Peace Bell Tower,” a replica of the bell tower at Shoganji Temple in Konu, Miyoshi City, Hiroshima Prefecture, was carved from Japanese cypress and assembled in Atlanta by four carpenters from Hiroshima. The bell tower will be dedicated on September 30, 2022 at 4:00 PM, the day before President Carter’s 98th birthday.

During World War II, an ordinance to collect metals was promulgated throughout Japan, and the temple bell from Shoganji Temple in Konu was supplied to the Kure Naval Arsenal. An estimated 95 percent of temple bells in Japan were lost during this period. However, before Shoganji’s bell could be turned into ammunition, the war ended. Following the war, the bell ended up in England, where it resided for a time with James Tayler. His son, Milos, discovered the bell in 1958 while sorting through his father’s belongings. In 1982, Milos moved to East Orange Park, Florida with the bell. In 1985, before returning to England, Milos put the bell up for sale. The Japanese Chamber of Commerce in Atlanta solicited donations to purchase the bell, and on July 24, 1985, Consul General of Japan in Atlanta Tadayuki Nonoyama and Hiromitsu Araki, Chairman of the Japanese Chamber of Commerce of Georgia, presented the bell on behalf of the Japanese community to President and Mrs. Carter to commemorate the construction of The Carter Center.

An inscription on the surface of the bell bears the name and location of Shoganji Temple, so on September 26, 1987, Hajime Akiyama, a member of the Japanese House of Councilors and Honorary Chairman of the Georgia-Kai, and Noriyuki Oku, former Consul of Japan in Atlanta, visited Shoganji Temple and reported the circumstances surrounding the acquisition and donation of the bell to President Carter. Shoganji Temple as pleased to learn that their temple bell, which they thought had been destroyed, was in fact carefully preserved at The Carter Center as a symbol of goodwill between Japan and the United States.

The mayor of Konu invited President Carter to visit his town on October 21, 1990. President Carter’s visit consisted of the unveiling of a monument featuring his handwritten message at Shoganji Temple and his hope for world peace and mutual exchange through the “Bell of Friendship,” the replica bell the people of Konu had constructed. The following year, Konu (now Miyoshi City) and Americus, GA established a sister city relationship. 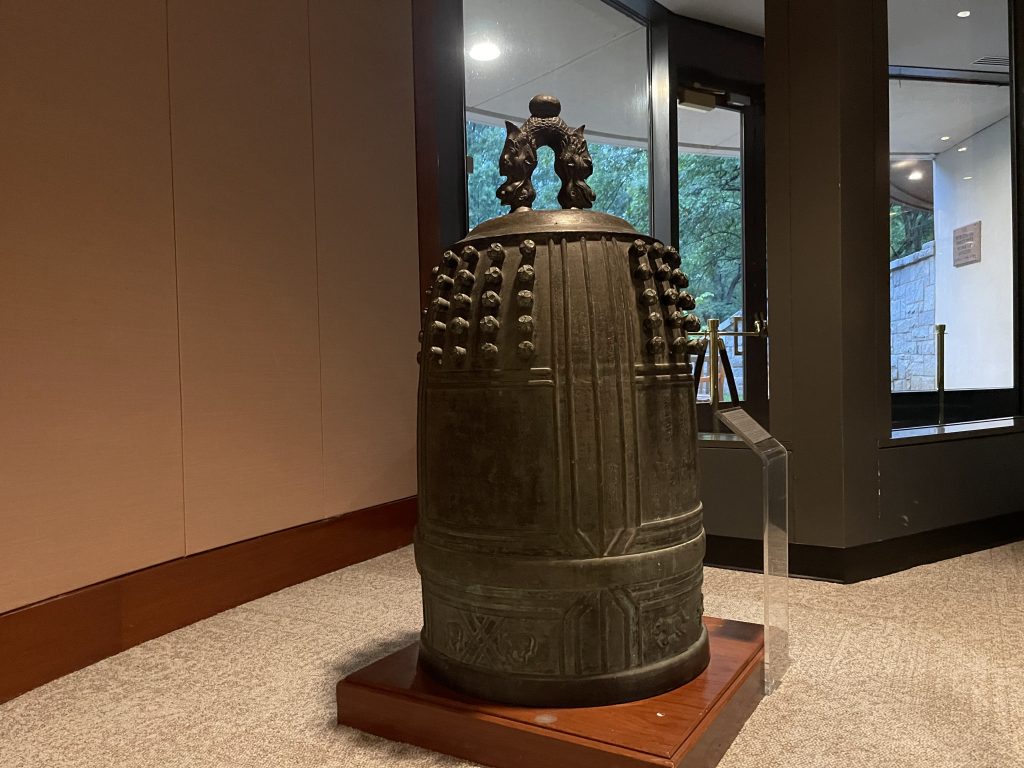 In 1994, Konu built the Jimmy Carter Civic Center, which includes a gallery called the Peace Learning Center that tells the story of President Carter’s life, his presidency, and the work of the Carter Center in Atlanta. On July 7, 1994, President and Mrs. Carter attended the opening ceremony for the building. Today, Konu’s main street is named Carter Avenue and the town boasts a baseball stadium named after President Carter as well as four houses built to resemble homes in Plains, Georgia. Many of Konu’s farmers grow “Carter Peanuts,” and there is a Carter Peanut Festival each year in November.

The Japanese community in Atlanta hopes that the bell tower will raise awareness of the contributions of President Jimmy Carter to the Japan-Georgia relationship, as well as highlight economic, cultural, educational, and political ties between Japan and Georgia.