Suzuki’s speech was one of the few times he’s spoken extensively in English in a public forum.

Seattle, August 29, 2022 — Ichiro Suzuki was inducted into the Seattle Mariners Hall of Fame on Saturday night, giving his entire 16-minute speech in English while reflecting on his career.

Suzuki became the 10th member of Seattle’s Hall of Fame, joining former teammates Ken Griffey Jr., Edgar Martinez, Jamie Moyer, Jay Buhner and Dan Wilson who had previously been honored by the club. All but Buhner were in attendance.

Baseball Hall of Fame president Josh Rawitch was also in attendance. Suzuki will be eligible for induction into Cooperstown in 2025.

Griffey and Suzuki sat next to each other during the ceremony. The pair were teammates in Seattle during the 2009-10 seasons. 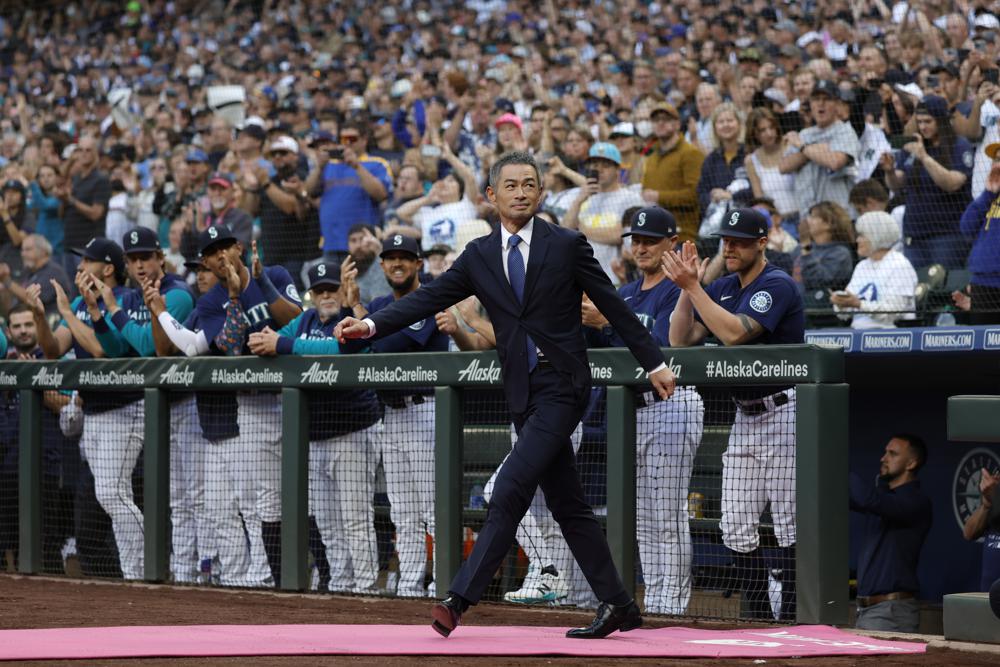 “There is a guy I like to call George. You know him as Ken Griffey Jr. He was my idol even before I came to America, but in 2009 he returned to Seattle and I finally got to be his teammate,” Suzuki said. “Yes, he’s a jokester. But for me, he’s also a true professional. He helped me in more ways than I can express. Being his teammate is truly one of my career highlights.”

Suzuki spent the first 11 seasons of his major league career with the Mariners before getting traded to the New York Yankees midway through the 2012 season. Suzuki played parts of three seasons with the Yankees, three more in Miami before returning to Seattle to close out his career.

His final appearance came at the beginning of the 2019 season which Seattle opened with two games in Japan. Suzuki announced his retirement after the second game. He’s spent the past several years as a special assistant to the chairman for the Mariners and regularly is in uniform and working with players or fielding balls during batting practice.

“I was 27 years old when I came to Seattle. I could never imagine my career in America would last 19 seasons and that I would still be in Seattle today,” Suzuki said. “With that in mind, I would like to say to the current players your future has possibilities that you cannot imagine as well. So embrace it by giving your best without imposing limits on yourself.

“If a skinny, undersized guy from Japan can compete in this uniform, and then stand before you tonight to accept this honor. Then there’s no reason you cannot do it either.” – AP

LG, Honda to set up US joint venture to make EV batteries

LG, Honda to set up US joint venture to make EV batteries