Najib became the first former prime minister to be imprisoned, four years after he was charged with corruption following his election ouster.

Putrajaya, August 23, 2022 — Malaysian ex-Prime Minister Najib Razak began his 12-year prison sentence Tuesday after losing his final appeal in a graft case linked to the looting of the 1MDB state fund, with the top court unanimously upholding his conviction and sentence.

Najib, 69, was whisked away to Kajang prison on the outskirts of Kuala Lumpur after the verdict. He became the first former prime minister to be imprisoned, four years after he was charged with corruption following his election ouster.

The five-member Federal Court panel said it found the High Court judge was right in his judgment and that Najib’s appeal was “devoid of any merits.”

“This is a simple and straightforward case of abuse of power, criminal breach of trust and money laundering,” said Chief Justice Maimun Tuan Mat, who read out the verdict.

“We are unable to conclude that any of the findings of the High Court, as affirmed by the Court of Appeal, were perverse or plainly wrong so as to warrant appellate intervention. We agree that the defense is so inherently inconsistent and incredible that it does not raise a reasonable doubt on the prosecution case,” she said.

The court ordered Najib, who has been out on bail pending appeals since his sentence in 2020, to begin his time behind bars. He also must pay a 210 million ringgit ($47 million) fine.

1MDB was a development fund that Najib set up shortly after taking power in 2009. Investigators allege at least $4.5 billion was stolen from the fund and laundered by Najib’s associates. Najib was found guilty in 2020 of seven charges of corruption for illegally receiving $9.4 million from SRC International, a former unit of 1MDB.

Najib has maintained his innocence. Just before the verdict, he stood up in the dock to make a statement protesting the top court’s series of refusals last week to postpone the appeal hearings.

Najib said he felt he was “unfairly treated” and that his case has been rushed through. He pointed out that a leaked verdict by the Federal Court had been posted on a website and said if this was true, it would be the a “judicial misconduct of the highest order.”

Maimun said the appeal hearings had ended because Najib’s newly appointed lawyers refused to make any new arguments in protest of not being given more time to prepare.

Najib appeared in shock after the verdict was read. He was immediately surrounded by his family and supporters. His lawyer later told reporters they may seek a review of the court’s decision.

“This is a historic moment for Malaysia, where the most senior leader has actually now faced an unprecedented moment of political accountability,” said Bridget Welsh, a Southeast Asian expert at Malaysia’s Nottingham University. ”For this decision, which is the first of many cases involving this particular scandal, to move in this particular direction really is a testimony to the rule of law in Malaysia, and the strengthening of the demands for the rule of law in Malaysia.”

Earlier Tuesday, Najib sought to remove Maimun from the case, citing possible bias because her husband had made a negative Facebook posting about Najib’s leadership shortly after his ouster in 2018 general elections. But the judges dismissed Najib’s application.

The Federal Court last week also dismissed a bid by Najib to seek a retrial on grounds of bias by the High Court judge, and refused to postpone the appeal to give his new lawyers more time to prepare. The court also denied a request by Najib’s new lawyer to withdraw from the case. 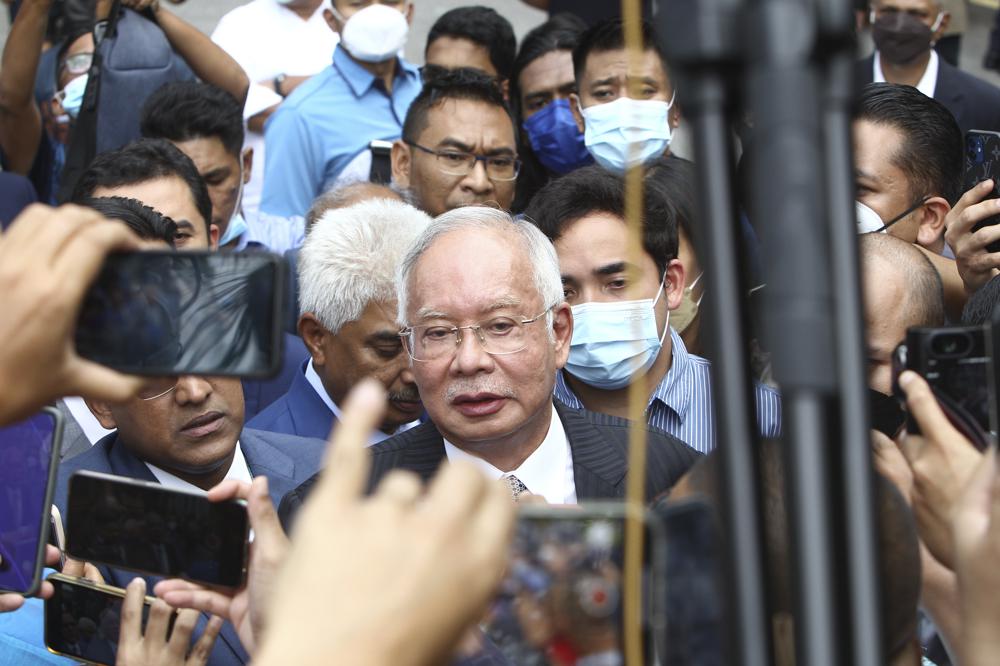 Maimun, Malaysia’s first female chief justice who was appointed in 2019, has come under attack on social media from Najib’s supporters. Police arrested a man over the weekend in connection with death threats made against Maimun. Hundreds of Najib’s supporters gathered outside the court in a show of support.

The Federal Court office said in a later statement that the verdict leaked online was an earlier draft. It said the court has begun an internal probe into the leak and lodged a complaint with police.

The prison term will cement Najib’s fall from grace. The British-educated Najib was born into Malaysia’s political elite. His father was the country’s second prime minister and his uncle was the third.

He was thrust into politics in 1976 after his father died, becoming Malaysia’s youngest lawmaker at age 22, and the youngest ever deputy minister two years later. He became prime minister in 2009 as a reformer but his term was tainted by the 1MDB scandal that sparked investigations in the U.S. and several other countries and caused his government’s downfall.

Najib faces a total of 42 charges in five separate trials linked to 1MDB, and his wife is also on trial on corruption charges.

Najib, who has a strong social media following, remains politically influential. His United Malays National Organization leads the current government after defections of lawmakers caused the collapse of the reformist government that won the 2018 polls. – AP

US EV buyers will lose tax credit under new legislation