Much like a human fingerprint, a dog’s so-called “noseprint” is unique and stays the same even as the animal ages.

Tokyo, July 3, 2022 – Tech companies in Japan and other countries have been sniffing out ways to reunite lost dogs with their owners, developing artificial intelligence that can identify these precious pooches based on no more than images of their noses.

Much like a human fingerprint, a dog’s so-called “noseprint” is unique and stays the same even as the animal ages.

Tokyo-based startup S’more and others have been tapping that quality in apps they say make it easier to recover dogs should they go missing, giving owners some welcome peace of mind.

This comes as the petcare industry expands in many parts of the world, with owners in Japan and other locations spending big on their furry friends, especially as households get smaller.

“If our app becomes widely used, the concept of a dog getting lost will disappear,” said S’more Chief Operating Officer Satsuki Sawashima. “We want to build our big data on dogs – something that has not existed so far – and contribute to the development of the pet industry.”

Users of the S’more app upload a couple of pictures of their dog’s nose. If the pet goes missing, anybody who comes across the lost animal can submit a photo for the app to record a match, helping pave the way to a happy reunion.

The AI technology at the heart of the process has used “deep learning” to study images of 2,000 dogs and has achieved an identification accuracy of about 90%. A beta version of the app rolled out last month.

S’more also plans to expand its app to include functions to help users manage their pet’s vaccination records and other health information.

With AI increasingly permeating people’s lives, it is perhaps inevitable that companies are looking for ways to extend it to man’s best friend. (Envato Elements pic)
Beyond Japan, South Korean startup Petnow and US food company Mars have also developed noseprint-recognition apps for pets. 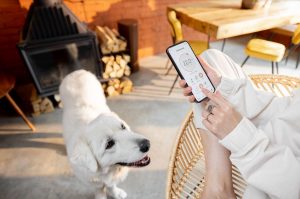 And over in China, the Alipay payment service of Ant Group last July introduced a noseprint-recognition system with a twist: its pet medical-insurance service is using the tech to verify the identities of pets to prevent false insurance claims.

Using face images of toy poodles to build the system, it divided the pictures into those of healthy dogs and those of pooches that went on to contract eye, ear or skin diseases, and then made AI learn them.

The company says the app has a prediction accuracy of about 70% for eye diseases and about 60% for ear and skin conditions.

Similarly, South Korean startup AI FOR PET has developed an AI-based app to help diagnose whether pets have diseases based on images of their eyes and other body parts. Owners submit photos from their smartphones, and are then informed whether their pets have disease-related symptoms.

AI FOR PET’S app has been approved by the South Korean government as medical equipment software for animals.

The artificial intelligence it uses is based on an article written by South Korea’s Konkuk University and others that was published in the British science journal “Scientific Reports” in 2019, about a diagnosis model that uses a so-called “convolutional neural network” – a deep-learning algorithm suitable for image recognition.

This diagnosis model made it possible to determine the severity of ulcers based on photos of corneas, with an accuracy of more than 90%.

These innovations have emerged as the number of people keeping pets in Japan has been growing, especially after the pandemic forced lots of workers to spend more time at home.

From this month, it has become mandatory for dogs and cats sold in Japan to be microchipped. And, with AI gradually permeating all aspects of people’s lives, it is perhaps inevitable that more and more companies will be looking for ways to extend such tech to man’s best friend. – Nikkei