New York, June 17, 2022 — The 16 cities of the first World Cup spread across three nations were revealed, and FIFA President Gianni Infantino made a bold statement summing up the goal of the 2026 tournament, to be played largely in the United States.

Roughly four years before soccer’s showcase comes to the U.S., Mexico and Canada, there already were winners and losers Thursday: Atlanta, Houston, Miami, Philadelphia, Seattle and Kansas City, Missouri, were among the cities picked after missing out on hosting the 1994 tournament.

Mexico City’s Estadio Azteca, which hosted the 1970 and ’86 finals, will become the first stadium in three World Cups, selected along with Guadalajara’s Estadio Akron and Monterrey’s Estadio BBVA.

Following the withdrawl of outmoded FedEx Field in Landover, Maryland, Baltimore’s omission means this will be a rare World Cup with no matches in the vicinity of a host’s capital.

Infantino promised a fan fest on Washington’s National Mall, and locations across the three nations are in play for training sites.

Infantino’s goal of reaching the top of U.S. sports appears to be quite a reach. The NFL averaged 17.1 million viewers for television and digital during its 2021 season, while the 2018 World Cup averaged 5.04 million on U.S. English- and Spanish-language TV.

“I know it was giggles and laughs,” North and Central American and Caribbean Confederation President Victor Montagliani said. “He wasn’t joking.”

“This is something which is definitely a fair compromise, taking into the account the interest of sport and the interests of the host countries,” he said.

“I think this part of the world doesn’t realize what will happen here in 2026,” Infantino said. “These three countries will be upside down. The world will be invading Canada, Mexico and the United States.”

The bid plan selected in 2018 envisioned 60 games in the U.S. for the first 48-nation Cup, including all from the quarterfinals on, and 10 each in Mexico and Canada.

Specific sites for each round will be announced later, and Infantino said world-wide television times will be a factor for the final, which makes the Eastern and Central times zones more likely. FIFA has gradually moved back the kickoff time of the final from 3:30 p.m. EDT to 10 a.m. EDT for this year’s tournament, which is 10 p.m. in Beijing.

The U.S. selections included none of the nine stadiums used in 1994. The Rose Bowl in Pasadena, California, and Orlando’s Camping World Stadium were the only ones remaining in contention, and they were among the sites dropped in negotiations with stadiums and cities that continued until right before the announcement.

New stadiums were selected in five areas used in 1994. AT&T Stadium in Texas instead of Dallas’ Cotton Bowl, SoFi Stadium in Inglewood for the Rose Bowl and Levi’s Stadium for Stanford Stadium.

Three U.S. venues have retractable roofs and SoFi has a fixed roof. All of the U.S. stadiums but Miami and Kansas City opened in 2002 or later.

Venues have a broader array of pricey seats than in 1994 — the bid book listed a total of 3,757 luxury suites and 76,317 club seats, even before the opening of SoFi, which hosted this year’s Super Bowl.

“We will study very carefully with FIFA how we can handle and make sure we have the best natural turf available,” he said. “That’s one of the high priority areas for us to focus on.” 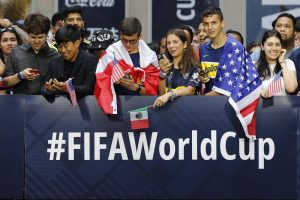 Some venues, notably SoFi, cannot currently fit a 68-x-105 meter (75x-115 yard) field and would need renovations to remove seats near sidelines. FIFA made similar demands ahead of 1994 but backed off and allowed some narrower surfaces.

“We have to move out some of the pinch points,” Smith said. “It doesn’t have any material aspect on capacity.”

The Detroit area, where the old Pontiac Silverdome hosted games, was cut in 2018 and Baltimore’s M&T Bank Stadium was the capital area’s contender after FedEx dropped out in April. Washington’s RFK Stadium was used in 1994.

In contrast to the 1992 site announcement during a news conference, the 2026 announcement was made during a show broadcast from Fox’s studio in Manhattan.

“It’s grown so much in my lifetime,” U.S. star Christian Pulisic said, “and I’m hoping that it can even take that next step.” – AP