Taking place in the 1980s, the concepts of racial and gender equality were not as prominent as they are in the present. However, in this coming-of-age musical, the ideas stemming from these concepts were captivatingly portrayed by the main storyline.

Atlanta, June 4, 2022 – Trading Places: The Musical, directed by Kenny Leon, starring Aneesa Folds and Bryce Pinkham, is a timeless story expanding upon the premise that money is not a tell of one’s character or values. Taking place in the 1980s, the concepts of racial and gender equality were not as prominent as they are in the present. However, in this coming-of-age musical, the ideas stemming from these concepts were captivatingly portrayed by the main storyline.

This storyline is mainly portrayed by Aneesa Folds, playing Billie Rae Valentine, a Black female who was not wealthy but learned her hard-working ethics and morals by growing up on the streets of Philadelphia, and Bryce Pinkham, playing Louis Winthorpe III, a White male who was wealthy as a result of his upbringing and position in the Duke and Duke company, a commodities brokerage.

The story begins with Louis Winthorpe III accusing Billie Rae Valentine of mugging him and trying to steal his briefcase, an empty accusation made as a product of the racial stereotypes of the 80’s. As Billie Rae is taken to jail, the heads of Duke and Duke, the Duke brothers, go on to make a bet, following the nature vs. nurture premise, that Louis would not survive without money and would ultimately resort to crime. Conversely, through getting Billie Rae out of jail and giving her the life of wealth and success that she never had, through the lens of “nature”, one of the Duke brothers believed that she would not be able to handle the pressures of the lifestyle especially as a woman. While the other Duke brother believed that through the lens of “nurture”, she would succeed.

Ultimately, Louis did struggle to survive without money, but Billie Rae thrived in her position at the Duke and Duke company, thus breaking the traditional mold of what women were perceived to be during that time, which was to be homemakers and complacent to their husbands. 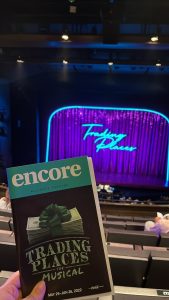 With the diverse group of supporting characters teaching Louis and Billie Rae life lessons throughout the way, they began to realize that a bet was made on them thus causing their lives to be switched in such an abrupt way. With the help of the supporting characters, they were able to reveal the illegal schemes and tactics that the Duke brothers used to rise to their level of undeserved success which had the brothers get sent to jail. With them being out of the picture, Louis, Billie Rae, and the supporting characters stressed the concept that money isn’t everything and that what matters is the kind of person one is at the end of the day.

This incredibly moving message was excellently portrayed by the talented cast, their highly entertaining musical numbers, and the beautiful and colorful sets seen throughout the play.