The so-called Land of Motors, covering around 1,000 sq km of prime agricultural land roughly between Bologna and Modena, is home to Lamborghini and Ferrari, Maserati and Ducati, in addition to less well-known brands.

Modena, May 31, 2022 – If Tuscany has Chianti, the Italian region of Emilia-Romagna has “Motor Valley”, an area that boasts one of the highest concentrations of luxury sports cars and motorbikes in the world.

The so-called Land of Motors, covering around 1,000 sq km of prime agricultural land roughly between Bologna and Modena, is home to Lamborghini and Ferrari, Maserati and Ducati, in addition to less well-known brands.

Every year – with a hiatus due to the pandemic – industry types and fans flock to Modena for a weekend to talk business and admire the spectacular cars and bikes displayed around town.

Among those on show this year was a Pagani Huayra, a futuristic hypercar produced just a few km away in Pagani’s base at San Cesario sul Panaro, where vehicles are made to measure – and start at a cool €2.6 million.

Christopher Pagani, the son of the founder and communications chief, said it takes between eight and nine months to manufacture a car, with customers normally waiting two years between order and delivery.

“This year we are producing some 40 to 45 cars. They are all special because every customer has the opportunity to get in touch with us, visit us, and go on this journey,” he said.

In the factory – dubbed the “workshop” – a few dozen mostly young people work in the hushed and ordered environment of a science lab. 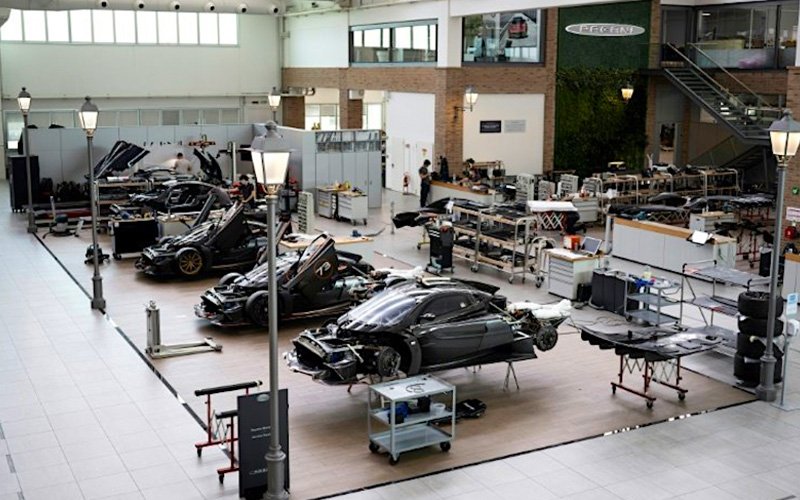 For the brand, weight is everything, and they use 40 different types of carbon fibre as well as titanium and aluminium to make the car as light as possible.

But Pagani said talks were underway with clients about a potential electric version, even if it would be heavier due to the battery, as part of a trend towards greener vehicles.

Best place to be

Pagani’s father, Horacio, founded the company in 1998 after working at Lamborghini, another of Italy’s top luxury brands based in the area.

According to legend, Ferruccio Lamborghini, the wealthy owner of a tractor factory, turned his hand to sports cars in the 1950s after complaining about the Ferraris he owned.

Enzo Ferrari is said to have told him that if he didn’t like what he made, he should go and build his own.

Ferrari’s Maranello site is located outside Modena, while the region also boasts Dallara, which provides cars for IndyCar racing in the United States, and motorbike firm Energica.

“The success dates a long way back, it is the fruit of several generations,” said Andrea Corsini, who handles transport, infrastructure and tourism for the Emilia Romagna region.

The name “Motor Valley” alludes to California’s Silicon Valley. Here, manufacturers found a ready skills base among farmers who, in the immediate aftermath of World War II, had to learn to repair their own machinery.

“In terms of job opportunities and contacts with companies, this is the best place to be,” said 24-year-old Emilio, studying car engineering in the south of Italy, who came to Modena for the weekend.

The sector records a turnover of €16 billion a year, of which €7 billion is in exports, and is in good health, with Bugatti, Ferrari, Lamborghini, Bentley and Porsche all posting record results last year.