Warning: unlink(/tmp/jnewslibrary-GBSigr.tmp): No such file or directory in /home/customer/www/gasiantimes.com/public_html/wp-admin/includes/class-wp-filesystem-ftpext.php on line 142
 Max Verstappen wins 1st F1 title with last lap pass of Hamilton - Georgia Asian Times
ABOUT
Advertise in GAT
Contact us

Abu Dhabi, Dec 12, 2021 — The most dramatic Formula One season in years ended, of course, in one of the most dramatic finishes possible when Max Verstappen snatched the world championship away from Lewis Hamilton with a pass on the final lap of the Abu Dhabi GP.

Hamilton was five laps away from passing Michael Schumacher in the record books with an eighth championship Sunday until a crash gave Verstappen and Red Bull one final chance.

Whatever Hamilton said over his radio when Nicholas Latifi crashed to bring out the safety car was only played as one long beep to cover the expletives.

F1 race director Michael Masi took his time figuring out how to conclude the race before controversially settling on one final lap of racing to decide the title. Verstappen started the final lap just behind Hamilton, chasing him through the first four turns.

Verstappen made his pass in the fifth turn and Hamilton had one last shot. He pulled his Mercedes even with the Red Bull but couldn’t clear Verstappen, who surged ahead to become the first Dutch world champion.

Verstappen and Red Bull celebrated in a champagne soak, received hugs from his fellow competitors — including Hamilton and Hamilton’s father — and made his way to the DJ stand at Yas Marina Circuit and jumped wildly up and down to the music.

“It’s just insane, I mean, my goal when I was little was to become a Formula One driver and to go for wins, to be on the podium,” said Verstappen. “When they play the national anthem, you want it to be yours and when you stand here and they tell you that you are the world champion, it’s something incredible and special.”

It was a fitting end to a season that saw the two contenders go wheel-to-wheel over 22 races spanning four continents and arrive in Abu Dhabi tied in the championship standings. It marked the first time the contenders were equal at the season finale since 1974.

“Congratulations to Max and to his team, I think he did an amazing job this year,” Hamilton said.

This bitter rivalry between Mercedes and Red Bull got the ending it deserved — one that left the victor speechless.

“Oh my God!” Verstappen screamed over his radio as he crossed the finish line. 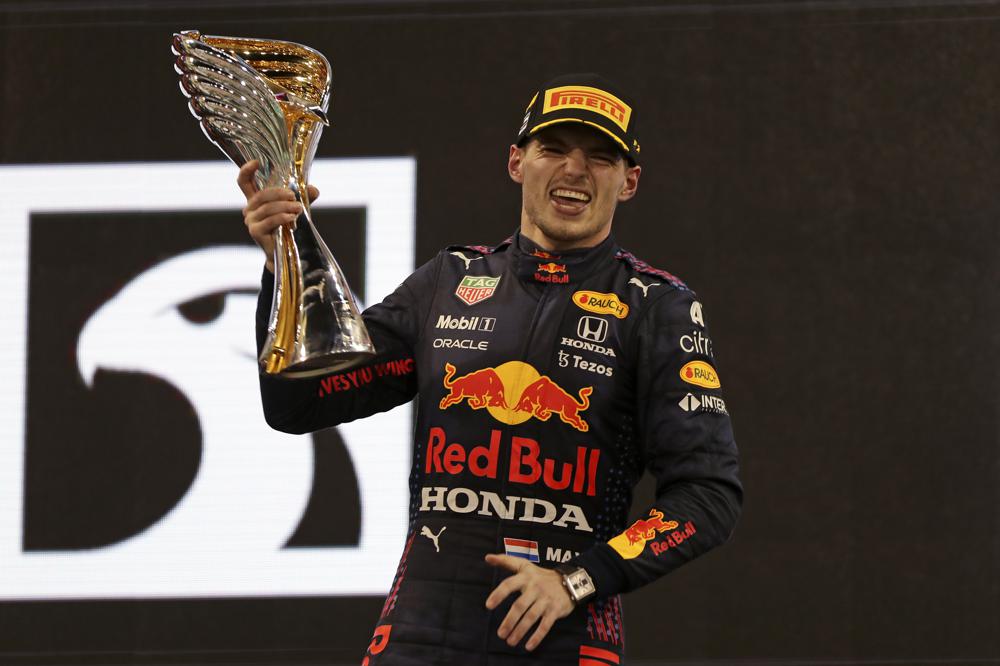 Red Bull won its first F1 title since 2013; Mercedes had won every championship since.

The mood was far different in the Mercedes camp, where Hamilton sat motionless in his car for several moments as other drivers made their way to congratulate Verstappen. The defeat ended his reign of four consecutive titles and denied Hamilton a chance to pass Schumacher as best all-time in F1.

Mercedes boss Toto Wolff was incredulous on the radio, demanding “the last lap be reinstated.”

Hamilton received a long hug from his father, who then went to the Red Bull garage and hugged both Verstappen and Verstappen’s father. Jos Verstappen was himself a former F1 driver and raised his 24-year-old son to become a world champion.

Mission accomplished and Red Bull celebrated by playing “We are the Champions” in its garage. – AP


Warning: unlink(/tmp/jnewsfirstload-2nyCx3.tmp): No such file or directory in /home/customer/www/gasiantimes.com/public_html/wp-admin/includes/class-wp-filesystem-ftpext.php on line 142