Half a century after the brand opened its very first boutique on Old Church Street in London, Manolo Blahnik has decided to unveil its archives to the public.

Paris, Nov 3, 2021 – 2021 marks the 50th anniversary of one of the world’s most renowned luxury fashion houses, known for its creations blending art with craftsmanship, skill and modernity.

Manolo Blahnik stilettos, sandals, moccasins and boots have been accompanying women – and men – for half a century, bringing to life the now legendary designs of the famous Spanish designer, who has always made his work a family affair.

In fact, it is with his niece, company CEO Kristina Blahnik, that he has spent months developing a major project: the opening of a virtual world retracing no less than 50 years of success.

Half a century after the brand opened its very first boutique on Old Church Street in London, Manolo Blahnik has decided to unveil its archives to the public.

And while it could have simply presented a retrospective exhibition, the luxury house has chosen a virtual project that’s accessible worldwide, and embracing the future thanks to new technologies.

In tune with the times, Manolo Blahnik is also lining itself up as something of a pioneer with this virtual museum, which takes visitors through no less than five digital rooms tracing the history of the house.

Called “Manolo Blahnik: A New Way of Walking,” this virtual world will, for the first time, showcase the archives of the fashion house, whose creations join Carrie Bradshaw, Charlotte York, Miranda Hobbes and Samantha Jones, as the stars of the hit series, “Sex and the City.”

Conceived in collaboration with curator Judith Clark and digital design studio Ronin, this interactive experience will immerse the public in the world of Manolo Blahnik through sketches, films, photographs and previously unseen models. 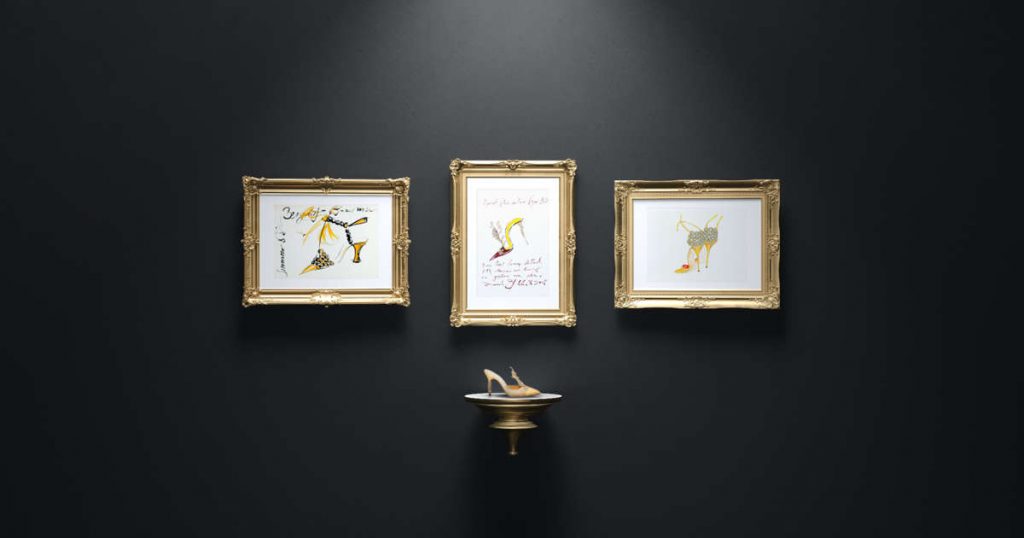 For Kristina Blahnik, opening the doors to the company archives for the first time is like a “dream come true.”

And this is just the beginning, she explains, as the virtual experience will continue to grow and to tell the Manolo Blahnik story as it evolves.

The first of the digital rooms – The Palette Room – focuses on 80 sketches arranged in a spectrum of colours, where viewers can discover untold stories.

The ’70s Room, meanwhile, looks back at the Spanish designer’s design journey and the evolution of his creations through film clips, newspaper clippings, portraits and photographs.

A third room, 12 Friendships, focuses on the friendships and encounters that influenced Manolo Blahnik’s work, starting with Diana Vreeland, the former editor-in-chief of American Vogue, who encouraged the designer to launch his career.

The final two digital rooms – The Gold Room and Our Family — showcase the house’s most extravagant creations, as well as the family and team members who have all contributed to the brand’s success over the past 50 years.

In a statement, Manolo Blahnik explains that the space is intended to offer everyone the chance to learn and feel inspired to create, providing a way for people to connect with the brand even its shoes remain out of reach.

As part of its anniversary celebrations, the luxury brand is offering a “Gold” capsule collection, crafted using fine and intricate materials such as feathers, lace or macramé. It features boots, pumps, sandals, heeled and flat mules, ankle boots and moccasins, all finished in different shades of gold.

In particular, Manolo Blahnik drew inspiration from his childhood for the “Bells” line, adorned with miniature bells referencing the charm bracelet worn by his mother.

This anniversary collection, which honors the brand’s high-end expertise, is available in stores and online.

Rare first printing of US Constitution sells for record $43M