It was the first time since 2017 that a U.S. president is attending the summit, part of three-day high-level meetings hosted by Brunei, ASEAN’s chair this year.

Russian President Vladimir Putin will also speak at the East Asia Summit, a wide-ranging forum on political, security and economic issues organized by the 10-member Association of Southeast Asian Nations.

The World Health Organization is expected to brief the leaders on the pandemic, which has set back the economies of the 18 countries representing more than half of the world’s population and accounting for over 60% of global GDP.

A White House statement Wednesday said Biden will reaffirm U.S. support for the ASEAN-led regional architecture and discuss his vision for working together with allies and partners to address issues facing the Indo-Pacific region. It was the first time since 2017 that a U.S. president is attending the summit, part of three-day high-level meetings hosted by Brunei, ASEAN’s chair this year.

During a separate meeting with ASEAN leaders Tuesday, Biden announced a $100 million initiative to beef up U.S. engagement with the region in the face of China’s growth as a national security and economic adversary. Biden called the U.S. relationship with the bloc “essential.” The funding will cover health spending, a new climate initiative, education and programs to bolster economic recovery. 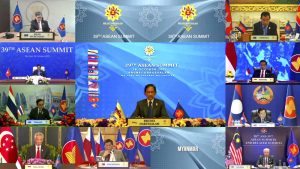 “I want you all to hear directly from me the importance the United States places on its relationship with ASEAN,” Biden said. “You can expect to see me showing up and reaching out to you.”

Relations between Washington and Beijing have plunged to new lows since nosediving under former President Donald Trump’s administration, which adopted a confrontational approach on trade, visas, diplomatic representation and educational exchanges.

A long-simmering dispute over Taiwan flared up recently after Biden said the U.S. has a firm commitment to help the self-ruled island, which China claims as part of its territory, in the event of an attack.

The U.S. nuclear submarine deal with Australia and the U.K. has also angered China, which claims most of the disputed South China Sea and warned the pact would threaten regional stability.

Some ASEAN nations such as Indonesia and Malaysia also fear the pact could escalate tensions in hot spots such as the South China Sea and spark an arms race.

“Indonesia does not want this region to become an arms race and a power projection that can threaten stability,” Indonesian President Joko Widodo told his Australian counterpart Scott Morrison, according to Indonesia’s foreign minister.

Australia announced a $93 million package to support security, climate and health efforts in Southeast Asia, while Morrison defended the new pact with the U.S. and UK., saying it does not change Australia’s commitment to ASEAN or the ASEAN outlook on the Indo-Pacific — “indeed it reinforces it.”

He said Australia had no intention of acquiring nuclear weapons and remained deeply committed to nuclear non-proliferation.

Japanese Prime Minister Fumio Kishida said his country shared serious concern with ASEAN about challenges to the free and open maritime order in the East and South China seas, according to Japan’s Foreign ministry.

He did not mention China by name, but Tokyo has more become vocal in defending the freedom of navigation and resolution of disputes based on international law, at a time China expands its military power beyond its shores, rattling neighbors with the construction of man-made islands and sending ships near their coasts.

The three-day ASEAN meetings have been clouded by a diplomatic standoff after military-ruled Myanmar skipped the summit in protest of ASEAN’s move to bar Senior Gen. Min Aung Hlaing, whose forces seized power in February, from attending.

ASEAN’s censure of Myanmar was its boldest after the bloc’s envoy was prevented from meeting ousted leader Aung San Suu Kyi and other political detainees as part of a proposed dialogue to ease the crisis that has left more than 1,100 mostly anti-military protesters killed.

During the ASEAN leaders’ talks with Australia Wednesday, Singapore Prime Minister Lee Hsien Loong expressed concern over the detention in Myanmar of Australian academician Sean Turnell, who served as an economic adviser to Suu Kyi’s government. Morrison thanked Lee for the concern, a Southeast Asian diplomat, who took part in the meeting, told The Associated Press on condition of anonymity because of a lack of authority to discuss the discussions publicly.

Myanmar has refused to send a junior representative to the summit, and slammed ASEAN’s move as going against the bloc’s principles of non-interference in each other’s affairs and decision-making by consensus. Cambodian Prime Minister Hun Sen said Myanmar’s decision to snub the summit was “regrettable” and hinted he may also consider not inviting the military-led nation’s top general to a video summit of more than 50 Asian and European countries Cambodia will host next month, the diplomat said.

There have been concerns that European leaders may skip the summit and just send lower-ranking representatives if the Myanmar general will be allowed to join, according to the diplomat.

Biden on Tuesday denounced the military in Myanmar for its use of “horrific violence” against protesters and pledged U.S. support for the nation’s return to democracy.

In a chairman’s statement released after the summit Tuesday, the bloc’s leaders urged Myanmar to give its envoy, Brunei Second Foreign Minister Eryan Yusof, full access to all parties and release political detainees.

While respecting ASEAN’s principle of non-interference, the bloc said it must also strike a balance in terms of rule of law, good governance, democracy and constitutional government in Myanmar’s situation.

“We reiterated that Myanmar remains a member of the ASEAN family and recognized that Myanmar needs both time and political space to deal with its many and complex challenges,” the group said. – AP

Microsoft profit up 24% in quarter, driven by cloud growth

Leaders of South Korea, Japan to meet amid dispute over history

Microsoft profit up 24% in quarter, driven by cloud growth