Warning: unlink(/tmp/jnewslibrary-SI1nPN.tmp): No such file or directory in /home/customer/www/gasiantimes.com/public_html/wp-admin/includes/class-wp-filesystem-ftpext.php on line 142
 Italy erupts as Europe’s soccer champions come home to Rome - Georgia Asian Times
ABOUT
Advertise in GAT
Contact us

For Italians, the championship was a new beginning for their youthful national team and a country that’s been yearning to return to normality after being hit hard and long by the pandemic.

Rome, July 11, 2021 — Europe’s soccer champions returned home at dawn on Monday to the ecstatic cheers of Italians who spent the better part of the night honking horns, setting off fireworks and violating all sorts of coronavirus precautions to celebrate their team’s 3-2 penalty shootout win over host England at Wembley Stadium.

Captain Giorgio Chiellini, his fist pumping the air, and coach Roberto Mancini hoisted the trophy high over their heads as they descended from their Alitalia charter flight at Rome’s Leonardo da Vinci airport. Amid cheers from airport workers, defender Leonardo Spinazzola hopped down the steps on one foot, his other one in a cast after he injured his Achilles tendon earlier in the tournament.

“Grazie Azzurri,” read a banner on the tarmac — a sentiment felt across the country after Italy took home its first major trophy since the 2006 World Cup.

The national team was being feted officially by President Sergio Mattarella and Premier Mario Draghi later on Monday, joined by tennis player Matteo Berrettini, who had given Italians another reason for pride on Sunday by reaching the Wimbledon singles final. Berrettini lost to Novak Djokovic, but he joined Mattarella at Wembley to watch the Azzurri finish 1-1 after extra-time and then win on penalties.

There was enough joy to go around to even reach the 10th-floor hospital suite of Pope Francis, who, even before the Italian victory, could savor the triumph of the team from his native Argentina, which won the Copa America earlier at the weekend.

“In sharing the joy for the victory of the Argentine national and of the Italian national squads with the persons near to him, His Holiness dwelled on the meaning of sport and its values,” said Vatican spokesman Matteo Bruni, in an update on the pope’s convalescence in Rome following July 4 colon surgery.

Bruni said Francis spoke of “that sporting ability to know how to accept any result, even defeat.” Quoting Francis, the spokesman added that he said that means in the face of life’s difficulties “you can always put yourself into the game, fighting without surrender, with hope and trust.”

For Italians, the championship was a new beginning for their youthful national team and a country that’s been yearning to return to normality after being hit hard and long by the pandemic.

A cacophony of honking cars, fireworks and singing fans filled the night in Rome as thousands of people took to the streets. As the sun rose on Monday, the noise had died down but not the sentiment.

“It seems to me that this victory is so good for the national spirit after all that suffering for COVID,” said Daniela Righino, an Italian living in Uruguay who was back in Rome for the final. “Yesterday was an explosion of joy. I’m happy.” 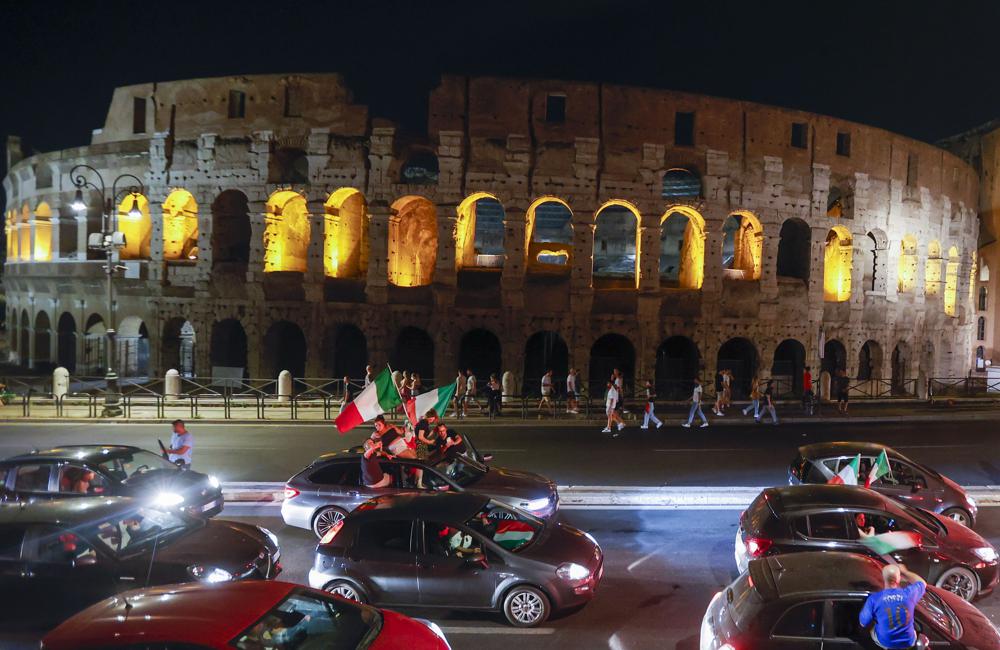 Many Italians saw the European Championship as a relaunch for a country that spent much of the past 16 months in various stages of lockdown. Italy was the first country outside Asia to get hit by the pandemic and suffered immensely, particularly in the spring of 2020 when hospitals in northern Italy were overwhelmed with patients and the death toll soared.

Italy has recorded more than 127,000 COVID deaths, the highest in the 27-nation European Union.

“It’s been a complicated year for everyone but especially for us who were one of the first countries hit. This is a signal of a new beginning,” said Michela Solfanelli, a 30-year-old event producer based in Milan.

Most virus restrictions have been lifted since the spring and those that remain were largely ignored by the mass of fans who danced in the streets of the capital chanting “we are champions of Europe.”

David Bellomo, a 23-year-old from the southern city of Bari, pointed out this was Italy’s second big victory this year, after Italian band Maneskin won the Eurovision Song Contest in May.

“Thanks to Eurovision and thanks to this game and soccer we’ve managed to come back this year,” he said. “We almost got a triple,” he added, referring to Berrettini.

Among the sea of blue shirts was an immigrant family from Senegal, who came from the town of Zagarolo, an hour outside Rome, to experience the final with the crowd in the piazza.

“I am not Italian, but I can feel the emotions. I feel it, as if I were Italian,” said Falilou Ndao, 42. “We really love this country.”

His 13-year-old son Yankho, an Italy fan and young soccer player, was impressed by the team.

“They showed courage. They never gave up, even when they were down by a goal,” he said. “It is so well-deserved. They have been playing great the entire tournament. Go Italy!”

Though people are still required to wear masks in crowded situations, police made no attempts to intervene as throngs of supporters poured out of the piazza, singing the national anthem and lighting flares. Fireworks cracked overhead as fans cruised through the city waving Italian flags from their cars.

Dr. Annamaria Altomare, a 39-year-old gastroenterologist, watched the spectacle with a friend from a safe distance. They were among the few wearing masks.

“We want to avoid the delta variant in this mess,” she said, laughing. – AP

Billionaire Richard Branson reaches space in his own ship


Warning: unlink(/tmp/jnewsfirstload-b5Sk6e.tmp): No such file or directory in /home/customer/www/gasiantimes.com/public_html/wp-admin/includes/class-wp-filesystem-ftpext.php on line 142